Powered by JustWatch
The movie version of Orson Scott Card's "Ender's Game" is way too kind, and the drama suffers greatly for it. The movie packs too much plot into 114 minutes and has serious pacing issues, and because its makers don't have a eye for spectacular set pieces, it never looks as grand as it should. But the film's biggest problem is a matter of tone and characterization: the characters constantly talk about how mean they can be, but their actions suggest otherwise.

Writer/director Gavin Hood ("X-Men Origins: Wolverine," "Tsotsi") makes the hero Ender (Asa Butterfield) seem like a brilliant and basically good kid who just happens to also have what one adult calls "a good killer instinct"—a savvy but potentially empathetic strategist perfectly suited to combat the Formics, an insectoid, warmongering alien race. Problem is, Card's Ender is not a nice kid who happens to do bad things because the circumstances call for it. The movie makes him seem that way, and that softens both the character and the story. Viewers who've never read the book might never know that this change has been made, but they ought to, because it goes a long way toward explaining why the movie feels so much like other science fiction and fantasy movies with young or young-ish heroes. The film softens up Card's characters.  The hero's teachers are too approachable, his child-aged friends too friendly. The movie doesn't trust the audience to stomach the book's tough-minded message.

At the beginning of the film, Col. Graff (Harrison Ford) introduces Ender to his peers as "the one" who will end the war against the Formics. When picked on in school, he viciously beats up a bully in order to prevent all future fights, which indicates a ruthless quality. But the movie begins sanding the rough edges off Ender almost immediately. Throughout the film, the hero struggles to stop planning strategically, and start thinking empathetically, but he makes that change too easily.

The film omits several crucial scenes from the novel in which we see Ender grow as both a military cadet and a social animal. It also flubs a couple of pivotal moments that show Ender passing or failing major tests of character. For starters, Ender's supposed to be a target when he enters Battle School, the outer space boot camp where kids learn how to lead, follow and plan. On the way there, Graff singles Ender out as the brightest of the new recruits. "You made them hate me," Ender says to Graff. He's right, but wouldn't know it based on the way Ender instantly connects with the characters who will become his friends. He meets Bean (Aramis Knight) right before Graff embarrasses him, and befriends Petra (Hailee Steinfield) right after Bonzo (Moises Arias), a senior-ranking recruit, bullies him.

Graff boasts to his colleague Major Gwen Anderson (Viola Davis) that he's isolating Ender. But in the film, Ender's always miraculously surrounded by people who care for him. In the film, we see Graff smiling and nodding at Ender after almost every training session. Ender may not be in control of his decisions, but in Hood' "Ender's Game," you can always see that somebody responsible is.

Because Hood has a quota of plot points he has to check off in a relatively short period of time, the strongest scenes in "Ender's Game" are the ones in which the movie quits watching the clock for a bit and allows Ender to take time to explore his world; his battle room training sessions are one such example. Unfortunately, Hood hobbles these scenes, too, by having characters verbally explain what's happening rather than simply show us. When Ender learns how to freeze his opponents with a laser-light gun, Hood doesn't show us Ender's friend's leg stiffen, he just has Ender's friend exclaim, "My leg's frozen" after Hood's camera crash-zooms in and out of his space suit's pant-leg so that we can see the suit tightening up on a molecular level. A few of the film's more special effects-intensive sequences look cheap, but even its relatively impressive-looking space battles are underwhelming because Hood rarely lets viewers get lost in Ender's world.
Advertisement 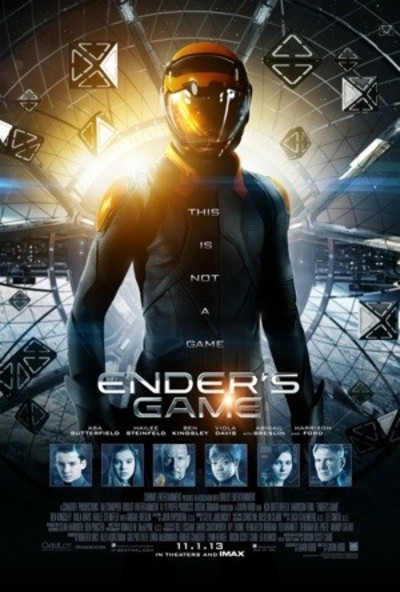