There have been movies influenced by other movies, and directors influenced by other directors, but "Emmanuelle" may be the first movie influenced by magazine centerfolds. Its style of color photography seems directly ripped off from the centerfolds in Penthouse, including even the props and decor. Its characters (French diplomats and -- especially -- their women in Thailand) inhabit a world of wicker furniture, soft pastels, vaguely Victorian lingerie, backlighting, forests of potted plants, and lots of diaphanous draperies shifting in the breeze. It's a world totally devoid of any real content, of course, and Emmanuelle is right at home in it.

The movie's first hour or so is largely given over to lesbian situations, but then Emmanuelle comes under the influence of the wise old Mario (played by Alain Cuny, the French actor immortalized as Steiner, the intellectual who committed suicide in Federico Fellini's "La Dolce Vita"). She is turned off at first by his age, but with age, she is assured, comes experience, and does it ever. Mario delivers himself of several profoundly meaningless generalizations about finding oneself through others and attaining true freedom, and then he introduces her to a series of photogenic situations. Mario's philosophy is frankly foolish, but Cuny delivers it with such solemn, obsessed conviction that the scenes become a parody, and "Emmanuelle"'s comic undertones are preserved.

What also makes the film work is the performance of Sylvia Kristel as Emmanuelle. She's a slender actress who isn't even the prettiest woman in the film, but she projects a certain vulnerability that makes several of the scenes work. The performers in most skin flicks seem so impervious to ordinary mortal failings, so blasé in the face of the most outrageous sexual invention, that finally they just become cartoon characters. Kristel actually seems to be present in the film, and as absorbed in its revelations as we are. It's a relief, during a time of cynicism in which sex is supposed to sell anything, to find a skin flick that's a lot better than it probably had to be. 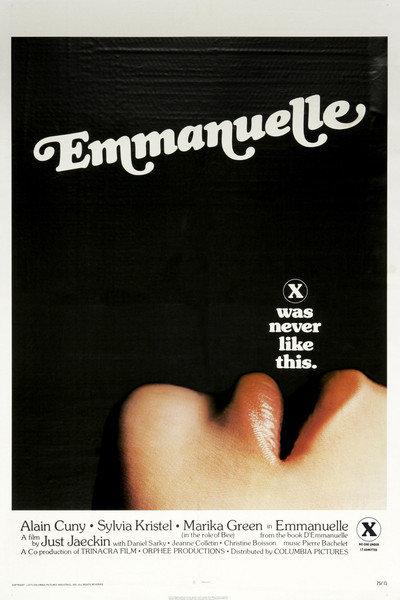