The infrequency of the Western genre tempts viewers to give new ones every possible benefit of the doubt on the theory that even a half-good example is better than none at all. So, even while "Echoes of War" wasn't really working for me for quite a while, I found myself still hoping against hope that it would turn itself around and make up for the awkwardness in the early going. Eventually, I finally had to concede to myself that, despite my best efforts, I could not see it as anything more than a giant bore that presents viewers with the most familiar plot devices imaginable but fails to present them in a way that makes them worth sitting through once again.

Set in a rural area of Texas just after the end of the Civil War, the story opens as former Confederate soldier Wade (James Badge Dale) returns to the home belonging to his late sister's husband, Seamus (Ethan Embry), and their family to recover from the horrors that he has seen. The Rileys survive by trapping animals on their property and eating the meat while selling the pelts, a meager existence that has become all the more so since their next-door neighbors, the McCluskeys—a once-rich and powerful family of cattle ranchers that has fallen on hard times since the army seized their livestock for the war effort—have now taken to raiding the traps and stealing the animals they have caught. Although Seamus and the others are content to simply let it slide, Wade is not so easygoing and pays a visit to the patriarch of the McCluskey clan, Randolph (William Forsythe, to ask him politely to knock it off, and you can no doubt surmise how well that pans out.

Of course, you realize that this means war, and Wade fires off the first shot when he catches the older McCluskey son, dimwit Dillard (Ryan O'Nan), stealing from one of his family's traps. He lures Dillard into inadvertently sticking his foot into another trap and leaves him. Things quickly escalate between the two sides, and whatever suspense there is comes from trying to guess which of the more or less innocent members of the respective families are going to get caught in the violent crossfire. On the Riley side, there is Wade's lovely and sweet niece Abigail (Maika Monroe) and nephew Samuel (Owen Teague), a young boy who idolizes his soldier uncle over the dad who sat out the war. For the McCluskeys, there is Doris (Beth Broderick), the matriarch who went mad following the death of another child, and Marcus (Rhys Wakefield), a more even-tempered son who makes daily excursions to clandestinely canoodle with Abigail.

Co-writers John Chriss and Kane Senes have provided a screenplay that consists of one overly familiar scenario after another, dialogue that strains for poetry at every turn and misses every time (If one more person made explicit mention of Wade's search for "peace," I was prepared to begin my own violent grudge war) and characters who always feel like plot devices instead of actual people. Senes serves double duty as director, and, as uninvolving as the screenplay he gave himself is, he does it no favor with a pace so sluggish that the film feels maybe three times longer than it actually is.

There are some good actors here but since they have been given neither compelling characters to play nor plausible dialogue, they more or less look exactly like what they are—a bunch of actors stuck in uncomfortable outfits uttering largely unspeakable dialogue. James Badge Dale, for example, is normally a good actor but his character is so one-dimensional and uninteresting that he is unable to get anything going with it, not even when the role takes on a darker tone in the later scenes. Likewise, William Forsythe is one of those B-movie presences who can usually liven up even the most substandard of material but he is also stymied by a character built of so many cliches that he was probably off-book halfway through the first table read. And anyone going to this film just to see Maika Monroe in her first major release since her big breakthrough earlier this year as the tormented girl at the center of the horror knockout "It Follows" will be especially disappointed to see her marking time in a nothing part that fails to provide her with any opportunity to show off the acting skills that we know she possesses in abundance. 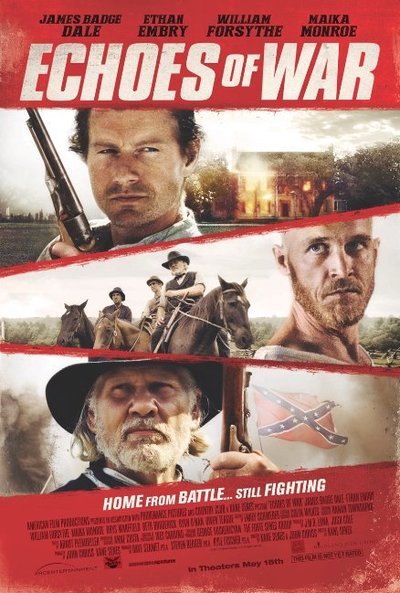