The makeover montage is as much a tradition in romantic comedies as the meet cute. Going back as far as Cinderella to characters from Eliza Doolittle to “Pretty Woman,” there is enduring appeal in the transformation of female characters into more conventionally attractive and glamorous versions of themselves, usually to an upbeat pop song. Transformation stories about men are more likely to involve superpowers, but for female characters the superpower comes from beauty, no radioactive spiders or gamma rays, just some mascara, a new hairdo, and a pretty dress.

There’s a makeover montage in “Dumplin’,” and it’s a lulu. It is overseen by drag queens who specialize in doing Dolly Parton, and it doesn’t get any more extra than that. Like so much in this film, this makeover comes with a refreshingly smart, funny, wise, and warmhearted twist.

Dolly Parton is not just the avatar of aesthetics and attitude; she is pretty much the fairy godmother of the whole movie. Her music, including six classics and six new songs, is on the soundtrack and Dolly’s music, look, and spirit are the animating force in the life of Willowdean (Danielle Macdonald of “Patti Cake$”), the plus-size daughter of Rosie (Jennifer Aniston), a former beauty queen who still runs the local pageant, where she reigned as Miss Teen Bluebonnet 1991. That pageant, established in 1933, as Rosie will be happy to tell you, is facing its own competition from an upstart, Miss Teen Sweetwater (“Hashtag pop!”).

Willowdean impetuously decides to enter the Miss Teen Bluebonnet pageant, along with her BFF Ellen (Odeya Rush), and two other unlikely candidates, the irrepressibly sunny Millie (“Hairspray Live’s” Maddie Baillio) and angry feminist Hannah (Bex Taylor-Klaus). Millie enters because she thinks it will be fun, and is confused when the other girls tell her they are entering as an act of rebellion. Willowdean and Ellen are not sure they agree when Hannah explains that, “It is a revolt against the oppressive hetero-patriarchy unconsciously internalized by the female psyche.”

The cheesy, superficial side of beauty pageants has been mined for humor and social satire in movies like “Drop Dead Gorgeous,” “Smile” and “Miss Congeniality.” There is a bit of that here but the focus is on the people, what they learn from each other and the pageant experience. Yes, a baton does get twirled and a tiara-ready updo gets thoroughly sprayed. But the characters are sympathetic to each other, at least most of the time, and the movie is always sympathetic to them. Rosie may be clinging to her one moment of feeling special, but she loves her daughter. And the movie respects the girls who take the pageant seriously without letting them or us think that they are defined by winning or losing the crown.

Willowdean insists that anyone who wants to go to the beach has a beach body, but she is not as sure of that as she would like to believe. Her feelings about the size-two girls who jog through town together in matching pink shorts to prepare for the pageant are not as casually contemptuous as she pretends. Even she is not sure how entering the pageant will help her with that or what she hopes to achieve. The honest confusion of her feelings, portrayed with lovely sensitivity and vulnerability by Macdonald, gives this film a sweet sincerity.

Part of the confusion comes from the devastating loss of Willowdean’s adored Aunt Lucy (Hilliary Begley), who told her she was “a diamond in a rhinestone world.” Lucy taught her to live large and to love Dolly Parton, who said each of us must figure out who we really are and then “do it on purpose.”  What really rattles Willowdean, though, is the handsome, popular boy who likes her. His interest makes her confront for the first time her insecurity about her appeal. She is hurt when Ellen begins to enjoy the pageant and embarrassed when Millie has the confidence and panache she cannot seem to find. Going through Lucy’s things, they discover the drag queen Dollys, who are happy to help out.

So there is a makeover montage, but it is more about Willowdean’s finding a way to be herself on purpose, her own way of being special, than about proving anything at the pageant. Like Ms. Parton herself, this film relishes the sequins and show, but charms us with its heart. 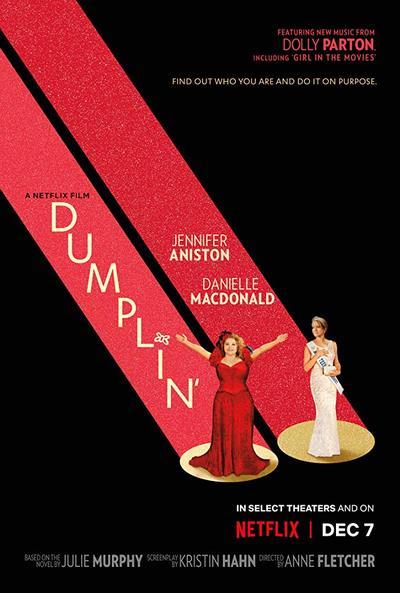