In my hometown of Dallas, Texas, there is a converted, three-screen Art Deco theater, the Inwood, that I visited so often growing up that people assumed I worked there in violation of child labor laws (in college, I worked there legally). The last time I visited with my children, they were showing "Spider-Man: Homecoming" on two screens and "Toy Story 4" on the third. Guaranteed moneymakers: you need a certain number of those if you're running a theater. The Inwood's equivalent of a Marvel or Pixar film was a an upbeat ensemble comedy-drama, usually about a bunch of folks in a small rural community, probably somewhere in the United Kingdom, Australia, New Zealand, Italy, or France, who rallied in service of a shared dream. Films like "Strictly Ballroom," "Cinema Paradiso," "Muriel's Wedding, "The Full Monty," "Brassed Off," and "The Englishman Who Went Up a Hill and Came Down a Mountain," drew a bullseye on that commercial and critical sweet spot, telling a laid-back yet clockwork-precise underdog story while filling the screen with character actors who wouldn't ordinarily get whole subplots to themselves.

"Dream Horse" is another of those: a film out of its time, as it were. It could have been released in about 1998, and if it had been, it might've played the Inwood for three months.

Toni Collette, star of the aforementioned "Muriel's Wedding," plays Jan Vokes, a bartender in a small Welsh town. She lives a boring life with her husband Brian (Owen Teale), a retireee who barely even listens to her anymore, and longs for something that'll shake up her routine and infuse a bit of energy into her economically depressed community.

An experienced breeder of whippets and racing pigeons, Jan decides to breed and train a champion stallion. She gets around the considerable expense (they don't call it "The Sport of Kings" for nothing) by proposing a collectivist approach: the costs of buying, feeding, and maintaining a couple of horses (roughly £15,000 a year) will be spread out amongst a dozen or so townspeople, contributing as little as £10 a month. After a not-too-contentious meeting of locals, it's decided by majority vote that the horse will be named "Dream Alliance." Jan's partner in the scheme is an accountant named Howard Davies (Damian Lewis) who had, shall we say, a bad experience with horses, but is willing to, er, get back in the saddle? Sorry. I've resisted up till now.

"Dream Horse" is a dramatization of a hit documentary from a few years ago, "Dark Horse" (better title, IMO), and like a lot of fictionalized versions of true stories, this one tends to flatten out some of the idiosyncrasies and make things feel a bit more like what'd happen in a commercially viable art house picture that adult children can see with their parents on a Sunday afternoon. There's nothing about this kind of film that is innately less "formulaic" than what you get when see a Marvel, "Star Wars," or "Fast & Furious" movie; it's just gentler and more human-scaled.

There are setbacks and upsetting reversals of fortune placed exactly where you'd expect them to be, and of course the characters find ingenious and heartwarming ways to rise above whatever trouble they encounter. When a trainer warns that our beloved horse will probably never race again to to a catastrophic injury, it's like those scenes in the "Rocky" films (they all had one, starting with "Rocky II" and continuing through the "Creed" pictures) where a doctor or trainer warns that if the fighter gets back into the ring, he'll go blind or deaf or suffer irreversible brain damage or lose his spleen and both thumbs simultaneously (that last warning never happened, but y'know, neither did Rocky or Creed's career-ending injuries). Be real, now: if this were the story of a group of people who tried to do a great thing only to have it blow up in their faces due to the iniquities of society, the cruelty of chance, or their own pathologies, it would never have gotten financed. Or it would've been made for pocket change, probably by Mike Leigh or Ken Loach, and audiences would've talked amongst themselves afterward about how scathing and incisive it was, then gone home to bed and stared at the ceiling till dawn.

But while there's nothing remarkable or surprising about this movie from director Euros Lyn and screenwriter Neil McKay, it's nearly impossible to dislike. And there's something to be said for seeing the story beats of machine-tooled, feel-good storytelling (including a "Rocky"-esque montage of the young horse being groomed and doted on and and fed from a bottle while townspeople stuff money into envelopes) applied to a story in which everything that happens onscreen actually could happen—or did. It's also a treat to see Toni Collette and Damian Lewis, whose careers have recently been defined by emotionally disturbed and/or relentless Americans in grim, relentless tales, cast as the sorts of people that you might run into at the store or on the city bus, and whose extraordinary stories you'd never know unless you decided to strike up a conversation with them.

Now playing in theaters and available on digital platforms on June 11. 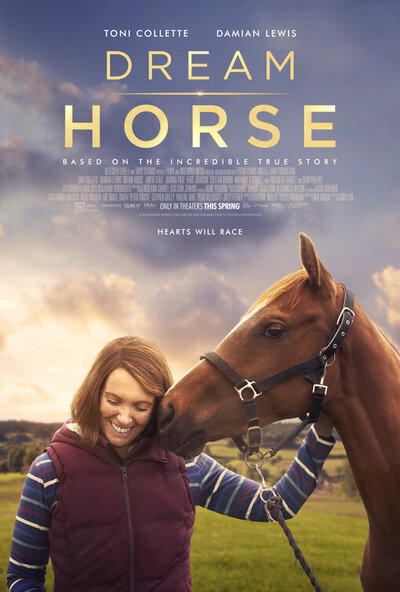