Thanks to such gorgeously gruesome cult favorites as "Deep Red," "Suspiria," "Inferno" and "The Stendhal Syndrome," Italian director Dario Argento has long staked out a position as one of the all-time great horror filmmakers, but even his most ardent followers would have to admit that his recent output has been a bit on the shaky side. "Mother of Tears," the long-awaited conclusion to his so-called "Three Mothers" trilogy divided his fanbase down the middle. Reaction to lame potboilers like "The Card Player" and "Giallo" ran the gamut from mild confusion to outright hostility. Argento's latest film, "Dracula 3D," is at least a bit of an improvement over the embarrassment of "Giallo", but no matter how promising the idea of him tackling Bram Stoker's classic might sound in theory, the result cannot be regarded as anything but a disappointment.

Argento and his three cowriters have stuck to the basic parameters of Stoker's tale while making a few changes along the way. This time around, the story opens with straightlaced Jonathan Harker (Unex Ugalde) arriving in a remote village to go to work as a librarian for mysterious town benefactor Count Dracula (Thomas Kretschmann) and quickly becoming the prisoner/walking feedbag for both the count and his "niece"—the newly vampirized town tart Tania (Miriam Giovanelli, supplying most of the film's nudity). Before long, Jonathan's beloved wife Mina (Marta Gastini) arrives in town to stay with her best friend Lucy (Asia Argento, supplying the rest of the nudity) to await her husband's return.

As it turns out, Dracula has had a long-standing agreement with the townspeople in which he helps the village prosper in exchange for unlimited snacking privileges, a deal that the locals are finally beginning to realize may not have been such a smart bargain after all. Meanwhile, Lucy, who has secretly been in the count's thrall, has been transformed into a vampire herself and Dracula now finds himself romantically obsessed with Mina herself. Just at the point when all seems lost, venerable doctor-turned-vampire hunter Abraham Van Helsing (Rutger Hauer) arrives in the hopes of saving the day and defeating his old nemesis once and for all using his faith, his cunning and a fresh batch of garlic-infused silver bullets.

"Dracula" is a story that has been told so many times on film over the years that anyone daring to do it again needs to bring something new to the party—a fresh take to the narrative or a striking visual approach—if it is to have any hope of standing out from the rest. This is what filmmakers as diverse as Werner Herzog, Francis Ford Coppola and Guy Maddin did with their respective versions ("Nosferatu," "Bram Stoker's Dracula" and "Dracula: Pages From A Virgin's Diary") and the results were among the finest vampire-related movies of our time.

Although the advance trailer for this film promised a wild riff on a familiar tale, "Dracula 3D" proves depressingly staid. As he did with his adaptation of "Phantom of the Opera," Argento offers up a version that plays like a choppy condensation based on hazy memories of the book, then augments it with nudity and gore. However, and also as was the case with "Phantom of the Opera," he seems to be largely going through the motions without ever offering any suggestion as to why he would want to yoke himself to such a familiar property in the first place.

At least with "Phantom of the Opera," the excuse could be made that since he had already done hi own unique riff on that story a decade earlier with his masterful "Opera," he had already used up his ideas. From a technical standpoint, there are some impressive contributions from two longtime collaborators, cinematographer Luciano Tovolli and composer Claudio Simonetti, and the retro production design is equally striking. However, Argento wastes their considerable efforts on a story that he never seems especially interested in telling in the first place.

He introduces one intriguing idea—the notion of the village being in cahoots with Dracula in exchange for prosperity—but then does nothing with it other than use it as an excuse to throw a couple of gory axe murders into the mix. There are also flashes of his flair for staging violence and his weirdo sense of humor (such as a jaw-dropping moment in which Dracula assumes the form of a giant praying mantis that is either the high or low point of the proceedings) but they are little more than brief respites from the lethargy that are further undone by "Sharknado"-level CGI effects. And while I understand that endings have never been Argento's strong suit over the years, the denouement here is especially weak, though it does lead to one of the most unintentionally hilarious lines of dialogue to ever be heard in one of his films.

The performances in "Dracula 3D" fail to show much depth either—Kretchsmann is perhaps the least terrifying version of Dracula to come along since Leslie Nielsen, Gastini and Giovanelli are pretty blanks (though the latter will no doubt become a favorite of followers of Mr. Skin) and Ugalde seems to have based his performance on the one that Keanu Reeves almost gave in "Bram Stoker's Dracula" and fails to live up to those standards. Rutger Hauer and Asia Argento, on the other hand, make more vivid impressions, but since the former doesn't arrive until 70 minutes in and the latter is largely wasted in a secondary role, their efforts are largely in vain.

However, when the two do get to share the screen for a brief confrontation, things liven up so considerably that I found myself wondering why Argento didn't choose to properly exploit his daughter's alluringly feral persona by simply casting her as Dracula and going on from there. I am not saying that "Dracula 3D" would have been a complete success had he done this, but that would have been the kind of audacious move that the movie sorely needed. More importantly, the end result almost certainly would have had more bite than this one 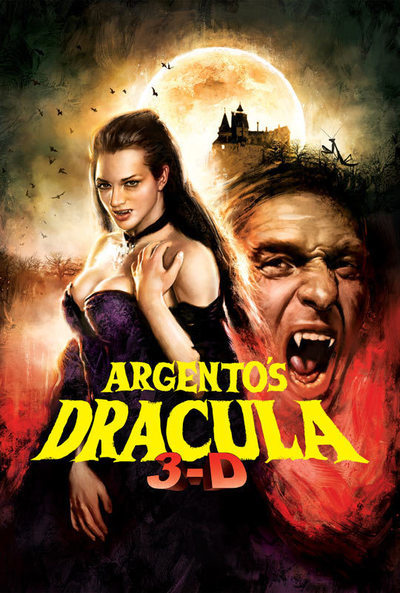