Downfall: The Case Against Boeing

On October 29, 2018, Lion Air Flight 610 crashed into the Java Sea shortly after departing Jakarta, killing all 189 passengers and crew aboard. In short order, questions emerged about the safety record of the Indonesian budget airline and the qualifications of its pilots. Few blamed the airplane itself, a hot-off-the-presses Boeing 737 Max jet.

After all, it was a Boeing, and the manufacturer’s reputation for quality was second to none. Boeing had been synonymous with safety for decades, since its 707 had taken off from Idlewild (now JFK Airport) and ushered in the Jet Age. “If it’s not Boeing, I’m not going!” was a slogan for a reason; pilots and passengers alike felt the company had earned their trust and would continue to. But then, five months later, in Ethiopia, another 737 Max fell out of the sky.

“Downfall: The Case Against Boeing” (now streaming on Netflix) investigates both crashes and their aftermath while exposing the culture of concealment at Boeing that made them inevitable. As directed by Rory Kennedy and written by her “Last Days in Vietnam” collaborators Mark Bailey and Keven McAlester, the film is rigorously reported and short on melodramatic flourish, instead presenting the facts with a cold, furious clarity that better suits its subject.

A damning account of the tragedies caused by the manufacturer’s malfeasance and greed, “Downfall” goes deeper to contextualize Boeing’s culpability within larger trends of American corporate governance, succinctly laying out how the lure of Wall Street led what was once an almighty symbol of American aviation to self-sabotage.

We now know that both 737 crashes were caused by the flawed design of an anti-stall system known as MCAS (Maneuvering Characteristics Augmentation System), which misfired after receiving data from a faulty sensor, forcing the plane’s nose down repeatedly even as pilots fought desperately to bring it back up. Their efforts were doomed to fail. Boeing had placed pilots in the impossible position of having 10 seconds to override a system they hadn’t known existed and weren’t told was aboard, let alone taught to operate.

MCAS wasn’t mentioned in the plane’s pilot or flight deck manuals. Boeing had even pushed back on those who’d requested flight simulator training before flying the new jet, conspiring to mislead the Federal Aviation Administration about the system’s significance and get their best-selling jet cleared for takeoff. Investigators eventually uncovered message exchanges between Boeing employees in which they insulted regulators and discussed playing “Jedi mind tricks” on them. It’s all abhorrent, blood-boiling stuff—and all motivated, of course, by a desire to drive up Boeing’s stock price.

“Downfall” posits that a shareholder-first mentality crept into Boeing at the close of the century, after its acquisition of McDonnell Douglas in 1997. That merger brought the latter company’s cutthroat managers into conflict with the former’s safety-conscious engineers, who’d founded Boeing to design the world’s best airplanes. They took pride in this work and feared it would suffer as executives focused less on manufacturing and more on financial engineering. Their fears were well-founded, but heavy-handed corporate tactics by company leadership gradually robbed the engineers of their voice at the company. All the while, executives doubled down on cost-cutting measures and courted stock market investors, sacrificing safety in the name of profit.

That approach continued after those tactics led to a tragedy, as Boeing sought to evade accountability while doing less than it could have to stop the next one. The company’s chilling apathy is framed as a matter of fact by the filmmakers, who know how to build a convincing case without losing their cool, but this is one element of “Downfall” that drives home how diseased Boeing has become.

“Downfall” calls upon various talking heads to tell this story, from journalists like the Wall Street Journal’s former aerospace reporter Andy Pasztor to politicians like Rep. Peter DeFazio, Chair of the House Committee on Transportation and Infrastructure, who led a congressional inquiry into the crashes. Especially critical are the voices of pilots like Captain “Sully” Sullenberger, who expresses shock and anger at Boeing’s decision not to tell pilots about MCAS.

The film also features interviewees whose stories were sidelined during coverage of the crashes, including families forced to grapple with unfathomable grief and former Boeing employees whose experiences provide insight into the company’s toxic culture.

Prominently featured is Garima Sethi, the widow of Lion Air Captain Bhavye Suneja, who calmly recounts not only the ordeal of discovering her husband’s fate but the stench of xenophobia that permeated early reports on the first 737 crash. Meanwhile, Michael Stumo, whose 24-year-old daughter Samya Rose Stumo died in the Ethiopian Airlines crash, emerges through the narrative of the film as a forceful, agonized crusader for justice.

All these perspectives allow “Downfall” to illuminate the human toll of these crashes as much as their cause, the filmmakers’ obvious compassion adding emotional charge and counterbalance to their diligent indictment of an amoral corporate culture. As the documentary details, decades of mismanagement at Boeing set the scene for these disasters. But “Downfall” reserves criticism as well for grossly negligent oversight by the FAA, which also lagged behind the rest of the world in grounding the 737 Max even after the Ethiopia crash.

And while Boeing was fined $2.5 billion in 2021 as part of a deferred prosecution agreement with the Department of Justice, it generated $76.6 billion in sales the same year. That settlement resolved a criminal charge that Boeing had conspired to defraud the FAA—which freed it up for future government contracts. In other words, the company’s ultimate sentence amounted to a slap on the wrist, followed by a handshake.

“Downfall” leaves you livid, though its implication that the company’s calamitous growth strategy is a feature of modern American capitalism, rather than a bug, feels more like a cry of despair than a call to action. That’s perhaps warranted at this point. “Downfall” so completely erodes trust in a once-revered institution and the others meant to regulate it that Boeing’s recent claims the 737 Max’s issues have been addressed—that the aircraft is now safe to fly—can only be met with high skepticism. If it’s Boeing, I’m not going.

“Downfall: The Case Against Boeing” is now streaming on Netflix. 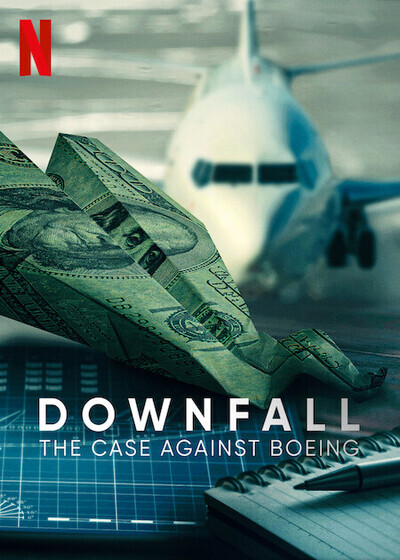 Downfall: The Case Against Boeing (2022)