Riveting, wrenching and extraordinarily important, Rory Kennedy’s superb documentary “Last Days in Vietnam” is effectively two films at once. One takes place nearly 40 years ago and tells the incredibly dramatic story of Americans’ frantic, chaotic evacuation of South Vietnam as Communist forces closed in on Saigon. The other film is that same story refracted through our awareness of the potential parallels between yesterday’s debacle and similar U.S. withdrawals from Iraq and Afghanistan today.

One surprising thing about the film is how unfamiliar its story will be for many Americans. For younger viewers, that’s more understandable. But this reviewer was an avid news watcher throughout the period covered and yet came out of Kennedy’s film wondering, “Why did I not know more about all this?”

One reason, of course, is that the collapse of South Vietnam two years after most U.S. troops were withdrawn was so abrupt and chaotic that it came across mostly as inchoate geopolitical spasms on the evening news. There was no lucid, overarching narrative of the kind Kennedy is able to provide in retrospect. Another reason, though, is that by 1975 Americans were so sick of the Vietnam War, which had divided the country into bitterly opposed camps for years, they simply wanted to look away. In doing so, they exacerbated a tragedy they had helped create.

Kennedy’s story begins in 1973, when the Paris Peace Accords negotiated by the Nixon administration and Secretary of State Henry Kissinger brought the long and torturous Vietnam War to an apparent end. North and South Vietnam were supposed to remain separate states like the two Koreas, and Nixon was able to withdraw U.S. forces while proclaiming “peace with honor.” Yet the agreement was, as one interviewee notes, a “masterpiece of ambiguity.”

In one of history’s bitter ironies, peace was maintained for a while because the North Vietnamese considered Nixon insane enough to attack them again if they broke it. Once the President was deposed by the Watergate scandal in late 1974, they saw their opening and took it. By spring of 1975, their troops were pouring across the South (the use of red spreading across a map has seldom been more appropriate) and the new administration of Gerald Ford gave no sign of returning America to the war.

In Saigon there remained several thousand Americans including contractors, newsmen, security and diplomatic personnel. As the collapse of the South unfolded, many of these folks grew increasingly worried about their South Vietnamese friends, colleagues and family members. And while making evacuation plans would have seemed the natural course of action at this point, it was not the one pursued by U.S. Ambassador Graham Martin, a genteel North Carolinian who simply couldn’t believe that disaster was imminent until it was literally upon him.

Meanwhile back in Washington, Ford tried to persuade Congress to vote a measly $722 million to help out their former partners during what Kissinger called the “final agony of South Vietnam.” Yet even the staunchest right-wingers in Congress were antiwar by then, and the aid was not forthcoming. Whatever one’s political leanings, it’s hard now to see this dereliction of responsibility as anything but shameful.

As the Communist forces closed in, a number of lower-level American personnel began “black ops” to help their South Vietnamese friends escape the country by stowing them on cargo planes bound for the Philippines. Soon enough, the airport was being bombarded and even that was not an option. As other South Vietnamese began to escape by crowding aboard their own aircraft and a flotilla of small ships headed out to sea, many of the desperate who remained stormed into the U.S Embassy.

Helicopters were considered the least desirable mode of escape, but by this time the last resort was all that remained. They only had 24 hours to pull it off. Washington ordered Ambassador Graham to be on the first helicopter out, but he refused and stayed to supervise the perilous evacuation, leaving on the penultimate chopper. The Americans promised the Vietnamese they would all be airlifted to safety, but ended up leaving 420 behind – a failure presented as symbolic of America’s whole history in Vietnam.

Watching the film, it’s impossible not to be struck by how much fantastic newsreel footage there is of these events. That’s certainly true of the Embassy evacuation, which plays out as thrillingly as the airport escape in Ben Affleck’s “Argo.” It’s also true of the action aboard the U.S.S. Kirk, a ship with a small heliport that was besieged by wave after wave of South Vietnamese helicopters. Forced to improvise, the U.S. sailors would unload the passengers from each chopper and then push it overboard so that another could land.

As great documentaries do, “Last Days in Vietnam” humanizes events that can seem merely factual in news reports and textbooks. Interviewing many survivors of the evacuation, both American and South Vietnamese (no North Vietnamese or present-day Vietnamese are included), Kennedy conveys the great compassion and valor certain Americans displayed at a time when their countrymen mostly enjoyed the balm of willful ignorance, just as she evokes the emotions of South Vietnamese being torn from their invaded homeland. It’s one of the saddest stories ever told.

Benefiting from the expert contributions from collaborators including editor Don Kleszy and composer Gary Lionelli, Kennedy doesn’t note her family connections to the story: her uncle, John F. Kennedy, escalated the military presence in Vietnam, and her father, Robert K. Kennedy was assassinated while running for President on an antiwar ticket in 1968. Yet if this tale has an emotional resonance for her, it holds the same for many Americans, especially at a time when another bout of understandable war-weariness among U.S. citizens threatens similarly messy ends to other overseas commitments. 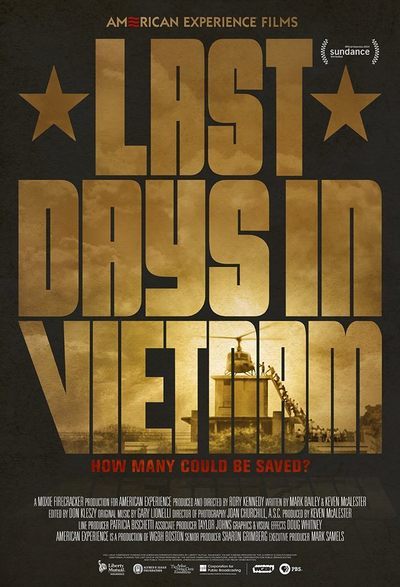