Pathological behavior seems to be the main subject of the bitter Ukrainian satire “Donbass,” an unpleasant, but as-advertised slice of life drama set in the title region, an embattled territory in Eastern Ukraine. There are some recurring characters throughout the movie’s otherwise unrelated narrative episodes. But for the most part, “Donbass” concerns the type of people who remain in Donbass, a corrupt, unstable, and (obviously) deadly war zone.

In “Donbass,” writer/director Sergei Loznitsa’s frequent use of long takes and master shots forces viewers to leer at whatever’s on-camera. Almost every scene goes on for so long that eventually it becomes clear any given vignette is less about what it’s about, but rather how, in this corner of the world, conflicts either do not end or cannot be resolved. Some moviegoers, seeking insights on Russia’s ongoing assault on Ukraine, might enjoy this sort of thing while waiting for real-life emotional catharsis. Good luck to them.

“Donbass” opens at a press conference that’s immediately halted after a furious onlooker (Olesya Zhurakovskaya) dumps a bucket of feces on a speaking journalist. The woman holding the bucket then gets into an extensive back-and-forth with a representative of her victim’s newspaper, but their conversation only reflects these two characters’ equally righteous and entrenched points-of-view. The bucket lady did what she did because, while she doesn’t know the journalist that she attacked, she has already been victimized by his reporting (either she and/or her husband took bribes?). And his newspaper, represented by the pissed-off on-looker, doesn’t really care about this woman’s hurt feelings: “Why listen to her? [the bucket lady] She’s just putting on a show!” But the show goes on, because it’s more of a trainwreck than a planned spectacle: “If the police and the courts failed, I'll defend my honor myself.” The two women continue to talk past each other.

Later on, people die in “Donbass” with just as much grace and narrative context. A massacre leaves at least a dozen dead—a film crew is randomly gunned down by separatists—but it’s presented as an event because of what follows the killing: the police show up, the media sets up, and the murders are covered in a way that distorts the anticlimactic and (according to Loznitsa) mundane nature of violence in this occupied territory. The reporters at the scene tell us that “a terrible crime has been committed last night,” and it’s interrupted the making of a film about “the peaceful lives of the people of Donbass.” The succeeding news segment is bad theater, defined as it is by Loznitsa’s blood-draining establishing shot and miserable dialogue exchanges like “Guys, you come when I say ‘start’!” and “Have you got it?” “Yes, but let’s do a wide shot.”

Nobody gets what they need or can be heard for what they’re saying in this traumatized milieu. Vital supplies are hoarded and/or dispensed by thugs and politicians, like the seedy organizer (Boris Kamorzin) who gathers a hospital’s staff in the maternity ward and gives them a rambling lecture about their supplies. The hospital is well stocked enough, according to Kamorzin’s mini-mogul, but who this guy is and why he’s giving a speech doesn’t seem to matter. Instead, we hear his bullying rhetoric and see how it’s received by a weary captive audience.

There’s a lot more where this sort of interminable, grinding despair comes from. Imagine how we feel, the filmmakers seem to say. Imagine needing to talk, but only communicating your own insecurities and desperation. Like method actors who, in drawing on their own painful memories grief for inspiration, only reflect their own self-regard. You can’t understand them, because they’re too hurt to articulate what they need, let alone what they’ve been through. Loznitsa’s movie wallows in that desperation, often with little dramatic variation or nuance.

The best scene in “Donbass” is also probably the hardest to watch: a mob gathers around a captured “exterminator” (Valery Antoniuk) and their taunts only grow more violent and incoherent as the scene goes on (and on). There’s some—OK, a lot—of physical violence and a few tasteless selfies are taken with Antoniuk’s stoic prisoner. There’s also a veneer of emotional complexity in this scene that’s absent from the rest of the movie.

Granted, it’s hard to watch Antoniuk’s character get screamed at and bloodied for so long by people who are clearly more upset about what he reminds them of than whatever it is he did. I guess that discomfort is also the point. Maybe the scene’s deliberate lack of resolution will help you to process your own complex emotions. Or maybe it will make you feel even worse. Pain is only so revealing, but “Donbass” has got a surplus on-screen. Have at it, there’s plenty to go around. 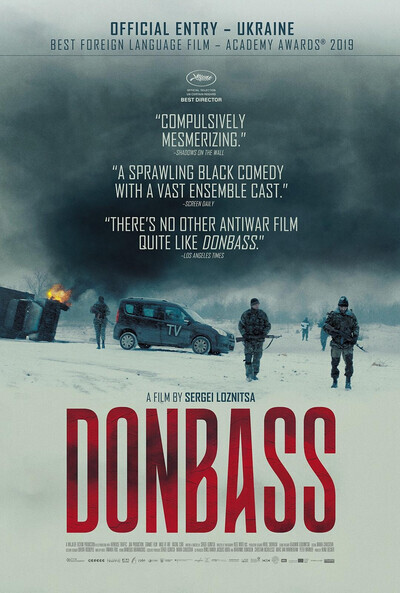 Olesia Zhurakivska as Girl with Bucket

Lyudmila Smorodina as Woman in Blue

Mikhail Voloshin as Man in Cap