Writer/director Richard Shepard proved a deft hand with the quirky crime picture with 2005's "The Matador," which featured former James Bond Pierce Brosnan strutting his stuff in all manner of garish and laugh-and-cringe-inducing ways as a hitman grappling (absurdly) with a midlife crisis. Shepard's new picture "Dom Hemingway" features Jude Law, sporting ridiculous facial hair, some interesting fake bridgework, and behaving in a similarly let-it-all-hang-out mode—like Brosnan's character, the ex-con Law plays here has little compunction when it comes to parading about in all manner of undress. The drama "Dom Hemingway" explores involves a vicious lout finding a form of redemption, and while that's an all-too conventional scenario, Shepard's movie plays it out in a brisk, inventive fashion and delivers a moviegoing experience that's almost equal parts stingingly sharp and genuinely sweet.

"Is my [redacted] exquisite," is the first line Law's Dom Hemingway utters, referring to a particularly beloved appendage of his while standing naked as the day he was born in a prison cell. The soliloquy that follows continues in that, um, vein, and Law delivers it with spittle-dispensing brio whilst building up to a punchline that's as funny as it is genuinely distasteful. Soon enough, Dom is out of prison, having gotten "the call," and he's off to set a few things straight, including a confrontation with the civilian who married his wife, and a sit down with the Russian crime lord he declined to rat on almost a decade and a half earlier. His negotiations do not go so great. As he confesses to his best pal Dickie—played in a marvelous turn by a martini-dry Richard E. Grant, whose sickly pallor is offset by eyewear tinted hepatitis yellow, a remarkably evocative look—Dom has got anger issues. "I tried yoga, the inspirational CDs, but the anger's still there," he says ruefully. But he can't help himself. On a jaunt to the South of France to meet crime lord Mr. Fontaine (played by Demián Bechir, having some broad fun), Dom takes a shine to the Russian mobster's pneumatically gifted trophy companion Paolina (Madalina Ghenea), which leads to some temporary awkwardness. Although he initially presents himself to Fontaine as "a petty serf, with good hair, and a strong liver," once he's got a few drinks in him, the ace safecracker is apt to start strutting about proclaiming "I'm Dom Hemingway" and making an unspeakably profane scene.

However, Shepard's a writer of pretty distinct cleverness, and he does not take this face-off to any place immediately predictable. Subsequent events at Fontaine's home land Dom, broke and busted up, at the home of his estranged daughter. There, he learns he's got a half-Senegalese grandson, and that, as he expected, his daughter wants nothing to do with him. Hemingway's bull-in-a-china-shop brashness alternates with a tender side that Law is careful to show hints of from the movie's very beginning. Part of the delight of this episodic movie is seeing how the two sides fight each other in the run up to the movie's climax, in which Dom is forced to examine what it is he really wants out of life while playing a pretty dangerous game with a former criminal associate from whom he wants to cadge some work. I will not lie: while an objective assessment of the movie's ending might conclude that in certain respects it's a little too satisfying, I was happy to let the whole thing have its way with me. I brushed away a tear at a graveyard scene, and pumped my fist grinning after a living character got a particularly well-turned comeuppance. Cool stuff, and Law should get some kind of award in a "Most Shamelessly Enjoyable" acting category. 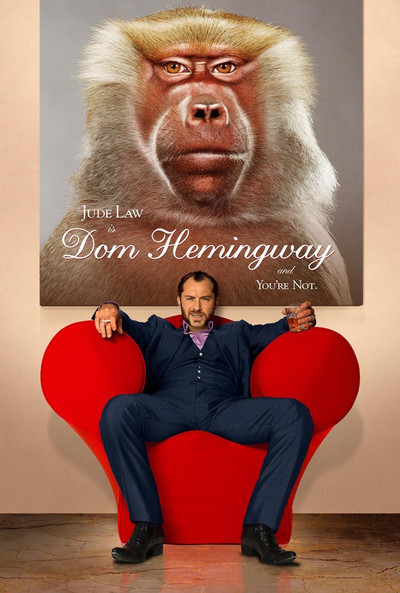