Under a gray and brooding sky, Stephen King's Maine brings forth yet another labyrinthine tragedy in "Dolores Claiborne." This is a horror story, all right, but not a supernatural one; all of the elements come out of such everyday horrors as alcoholism, wife beating, child abuse and the sin of pride. The non-supernatural movies based on King stories ("Stand by Me," "Misery," "The Shawshank Redemption" and this one) are curious in that they deal with unhappy situations, and yet somehow don't turn audiences off - maybe because the characters are so strongly drawn.

Here we have a story involving a hardworking housekeeper named Dolores (Kathy Bates) and the daughter she hasn't seen for 15 years, a New York magazine writer named Selena (Jennifer Jason Leigh). One day Selena gets a fax of an article from the Bangor, Maine, paper, about a woman suspected of murder. Scrawled across the cover page are the words, "Isn't this your mother?" Although she has a big assignment in Arizona she desperately wants to cover, Selena ventures to the Maine island where her mother awaits possible booking for the crime. She arrives in the kind of town where the motels close all winter, everybody knows one another, and people still say, "Oh, my gravy!" But the prosecuting attorney is from the mainland and has cold eyes. His name is Mackey (Christopher Plummer), and his accent starts out folksy but turns chilling.

We in the audience have already seen the fatal event, in the title sequence, and it sure did look like Dolores pushed that poor old lady down the stairs, and then was fixing to bash her head in with a marble rolling pin, just when the mailman interrupted the crime. But maybe there is another way of looking at the murder - andat the death, 15 years ago, of Dolores' husband and Selena's father, a mean drunk who died after falling down a well.

Dolores worked for ages for the old lady, a perfectionist named Vera Donovan (Judy Parfitt), who demanded "six clothespins, not five" on every sheet, and wanted them hung outside on the line, even in deepest winter. Maybe she had a motive for killing her. The mother and her daughter move back into the ramshackle family home, and we discover that Selena uses a lot of booze, pills and cigarettes to keep the lid on the kinds of stresses that are caused by cigarettes, pills and booze. She has little regard for her mother and may even believe the woman had something to do with the father's death.

More than this I dare not say. "Dolores Claiborne" is the kind of movie where every corner of the house and lawn contains its own flashback, to long-ago events that look differently, depending on your angle. And much depends on what happened on a day when there was a six-minute total eclipse of the sun (King is big on eclipses), and how the drunken dad (David Strathairn) ended up down that well.

Given the level of melodrama in this story, it's surprising how much it turns into a two-character drama. Bates and Leigh are well-matched here, as mother and daughter with a long history of deep hurts and suspicions. There is no false sentimentality, and - more important - no false theatrics in their relationship: They are bitter, taciturn Maine people, with a lot of shared hurt. So complete is their chemistry that a subplot involving Selena's New York job and editor is an unnecessary distraction.

It's sometimes distracting to tell a story in flashbacks and memories; the story line gets sidetracked. The director, Taylor Hackford, is successful, however, in making the present seem to flow into and out of the past. He is helped by the uncanny resemblance between Leigh and Ellen Muth, the actress who plays her as a young girl. And a key story thread is made much more convincing by a couple of key speeches, wonderfully delivered by Judy Parfitt as the exacting but not evil old lady. (The movie assigns her one of several repetitions of the movie's dialogue riff, which is, "sometimes being a bitch is all a woman has to hold on to.") Sticklers for detail may wonder about the final scene before a local magistrate. Isn't a lot being taken for granted, not only about the current death but also about the past one? It seemed to me the plot stirred up more than it settled, but Tony Gilroy's screenplay satisfied me with one perfect speech by Leigh, which ends, "whatever you did, I know you did it for me." Stephen King fans hoping for ghouls and satanic subplots and bizarre vastations may be disappointed by "Dolores Claiborne." I was surprised how affecting the movie was, mostly because Bates and Leigh formed such a well-matched and convincing pair. Does this movie creep up on you? Oh, my gravy. 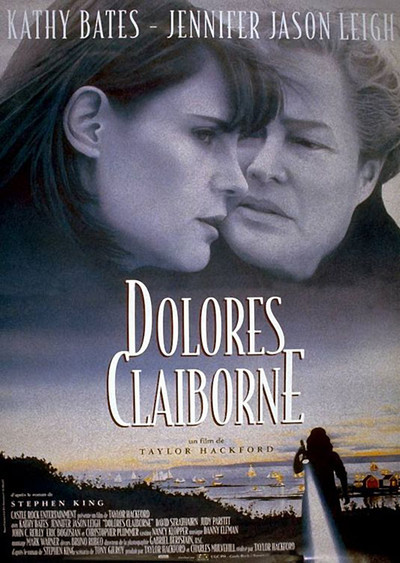