In "Dog Gone," Rob Lowe plays a businessman who joins his son to search the Appalachian Trail for a lost dog. At one point, he describes his expertise as making "predictive assumptions." It does not take much expertise to make the predictive assumption that this movie, a heartwarming fact-based story of John Marshall and his son, Fielding (Johnny Berchtold) reconciling to find a beloved pet, will have some sweet dog-bonding montages to indie music (Freebridge, VANYO, Easy Tiger), human and canine health crises and tender moments of connection, a little comic relief, photos of the filmmakers hugging their own dogs over the end credits, and some happy tears from the audience. The movie is based on a book of the same name by journalist Pauls Toutonghi, son-in-law of John Marshall and brother-in-law of Fielding. The screenplay by Nick Santora skillfully smooths out the story, with strong control of tone by director Stephen Herek, a fine score by Emily Bear, and cinematographer Michael Martinez making the best possible use of the beautiful Georgia landscape that stands in for a Virginia setting.

Fielding is a senior in college when he decides to cure a broken heart by going to the pound, where he instantly falls in love with a beautiful, cream-colored puppy he names Gonker. They have a blissful school year together until Fielding realizes the day before graduation that everyone else in his class has a good job lined up, while he is still trying to figure out what kind of job he can do. After missing graduation, because he and Gonker overslept, Fielding moves back home.

John is crisp, focused, professional, and sometimes sarcastic. "I'm sure it's worth the six-hour round trip just to see 4,000 strangers dressed in the same outfit," he says when Fielding shows up after the ceremony. He tells Fielding he does not have the time or responsibility for a pet, and when Fielding insists, John tries to put Gonker in a shock collar to keep him from leaving their property.

Fielding does yoga and loves to wander around the outdoors. He wears shorts and a shell necklace. He turns down his father's offers to set him up for job interviews. He is devastated when he overhears his father describing the contrast between them. "I always knew he was disappointed in me, but this time he seemed embarrassed," he admits. Meanwhile, he does not tell anyone about some troubling symptoms he is experiencing.

On the Appalachian Trail, Fielding and his best friend Nate (the endearingly wry Nick Peine of "A.P. Bio") let Gonker run after a fox and they become separated. John drops everything and promises they will find Gonker and bring him home. Fielding's mother, Ginny (Kimberly Williams-Paisley), sets up a command center at the house with fax machines and phone books ("I'm analog!" she says), fliers, and one of those maps with red yarn connecting the various locations. For morale, she posts a "hero list" of all the people helping. The search is especially urgent because there are only 19 days until Gonker must have medication for Addison's disease.

As aww-inspiring as the human and dog moments in the movie are, it is the human encounters along the search that are the heart of the film. For Ginny, helping to find Gonker is a way to help resolve the pain she still feels over the Akita she lost as a child. For John and Fielding, it is a way to learn what they have to learn from one another, to discover what they have in common, partly through the encounters they have along the way. Over and over again, they get unexpected support from people they would never otherwise meet, from a man at a gas station who sells them a figure of the patron saint of lost souls to a group of bikers and a sympathetic reporter, many who also have dogs they love. John and Ginny demonstrate what "hard work and calculated, deliberate decisions"—and the kind of resources that pay for a big house and enable the family to take a month off—can accomplish. Most important, as it usually is, is what John communicates simply by being there, showing Fielding what responsibility and commitment means to a father. "You worry about Gonker because you love him, and he's lost. That's why I worry about you."

Lowe, who also produced, is ideally cast as a man who loves his son even though he does not fully understand him. He brings some low-key sardonic humor to the story, especially when he's breaking a rule by referring to the ancient caravans on the Silk Road or reminding Fielding that Caesar did not thank the generals until they won. Williams brings warmth to the role as the "analog" Ginny tackles new technology and even social media to help the search. And Berchtold reminds us that "calculated, deliberate decisions" are important, but so are devoted friends, human and otherwise, who love us without conditions. 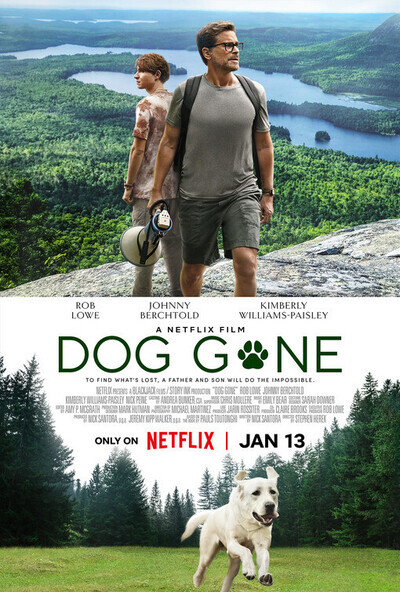