The vengeance-driven friendship comedy "Do Revenge" is to the 1980s and '90s high school movie as the "Scream" series was to the post-"Halloween" slasher picture. It's a compendium of devices, references, and (sometimes tediously) self-deprecating jokes that seems meant to let you know that the filmmakers know that you know what they're up to. At the same time, the film manages to blend all of its influences into a distinctive movie that is fully committed to its vision of high school as a handsomely costumed and art-directed snake pit filled with sadists who get off on other people's pain and embarrassment.

Director-cowriter Jennifer Kaytlin Robinson's cheekiest borrowing is from the plot of Alfred Hitchcock's "Strangers on a Train," wherein a coldblooded killer entices a stranger to "swap" murders with him so that the police will assume both killings are random, making them harder to solve. Here, the intent isn't homicide but humiliation: two high school students whose lives were shattered by schemers contrive to trade missions of revenge so that there won't be any footprints leading back to the perpetrators.

Camila Mendes ("Riverdale") stars as Drea Torres, a student at Rosehill Private School who's obsessed with getting into Yale. Tracy Flick-ish scholarship student, she's the queen bee of a hive that includes Tara (Alisha Boe), Meghan (Paris Berelc) and Montana (Maia Reficco). Drea is said to be popular but seems mainly to be feared, and she's got secret anxieties. She's an assimilated Mexican American who lives in a small house that she's ashamed of. She managed to claw her way to the top of the pecking order at a predominantly white, privileged high school despite being plagued by racial and class worries. At the start of the story, she's on top of the world. Teen Vogue even throws her a Gatsby-decadent party to celebrate her winning the magazine's Teen of the Year award.

Then somebody leaks a Facetime video of Drea taking her clothes off for the delectation of her equally popular boyfriend Max (Austin Abrams). Everything Drea has achieved melts away, and she's left broken and mortified. Drea assumes Max leaked the video. Max denies it, but once senior year begins, he reminds everyone of the heroine's shame to secure his own position as the institution's most visible and influential student. Max also founds the Cis Hetero Men Championing Female Identifying Students League, an organization that brags about the "allyship" of its members but is mainly camouflage for Max and his bros to womanize without getting called out as misogynists. (The movie has a sure touch with this kind of satire, scoring laughs by acknowledging how awkward and silly some of the sensitivity language sounds without minimizing the pain of people who need more defenders.)

Enter Eleanor (Maya Hawke), a gangly white lesbian in standard-issue Hollywood frump clothing who's still traumatized by an incident that occurred at summer camp years ago. Eleanor and Drea become unlikely friends, and Drea suggests swapping revenge plots. Drea's involves giving Eleanor a makeover to transform her into a sexy oddball newcomer, grab Max's attention, and draw her into his inner circle, where she can gain the trust and pick the brains of all the people who were complicit in Drea's downfall. It's absurdly elaborate even by the standards of high school movies. It's as if a cross-dressing Shakespeare comedy had been outfitted with elements from "Clueless," "10 Things I Hate About You," "Election," "Rushmore," and "Cruel Intentions." (Sarah Michelle Gellar, star of "Cruel Intentions" as well as "Buffy the Vampire Slayer," has a small role as the headmistress of Rosehill, who advises Drea to channel her anger rather than explode in rage, as she did while accusing Max of leaking the video.)

The screenplay mines a few of the same thematic elements as Robinson's MTV series "Sweet/Vicious," about a pair of college students who plot vigilante retribution against sexual assailants; but the candy-store visuals overseen by costume designer Alana Morshead and production designer Hillary Gurtler orient the story as a social satire with a splash of compassion. People do terrible things to each other in this movie, but at least a few of them have the decency to feel bad about it.

"Do Revenge" doesn't bear any more relationship to actual high school than the films that its makers love so much. There are so few adults around that when a relative, teacher or administrator shows up to push the story along, it feels like a disruption of normalcy. Cinematographer Brian Burgoyne and editor Lori Ball conspire with the director to keep the movie constantly winding its way forward while allowing for stylish grace notes, such as an Andersonian perfectly-symmetrical establishing shot or a voluptuous needle-drop that uses most—and in at least one case, all—of a song. (The no-misses soundtrack mixes Billie Eilish, Alessia Cara, Tony K, Maude Latour, the Jonas Brothers Band, and Taylor Swift.) Half of the cast is well into its twenties (and a few appear older), and there are innumerable costumes changes unveiling outfits of royal finery. Kudos to Robinson and cowriter Celeste Ballard for leaning into the fantasy even as they footnote it. The lavishly produced, over-plotted high school vipers flick is as well-established a sub-genre as the Spaghetti Western. That means there are certain aspect that every one of them must contain or risk alienating the audience, such as a makeover montage; a theatrically styled soul-baring monologue about trauma; and a series of heel-turns and face-turns that keep the audience on its toes.

It's not sporting to say much more about that last thing. Suffice to say that the characters' emotions keep threatening to derail the goals they set for themselves, whether they're healthy or unhealthy, and that the many frank discussions of deception, impersonation, and performance are text as well as subtext. Drea and Eleanor are the best of friends until suddenly they aren't. Our opinion of Max remains in flux until the final act. There's more to Eleanor than we initially assume; whatever you're predicting in your head as you read this is not quite what the movie gives you. (Hawke, who's got her mother Uma Thurman's smoky-wounded voice and her father's laid-back know-it-all charm, plays every beat just right.)

The movie takes its sweet time unveiling all of the characters and lowering the plot machinery into place. It could've been shorter and delivered the same story. But then you wouldn't have gotten any of the long scenes of people talking and getting to know each other that elevate "Do Revenge" beyond pastiche. The characters are constructs who are so aware of themselves as constructs (and the plot, too) that there's really no reason why we should feel for them, but we do, thanks to the lead performances, the direction, and the kidding/not kidding vibe of the entire production. 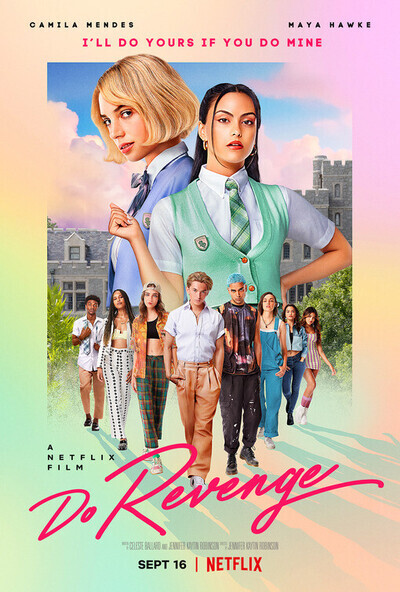