Concord, New Hampshire, is not known as a hotbed of terrorist violence; it has endured just two murders in the last 16 years. And yet here we are in a city council meeting, watching councilmembers weigh in on whether to accept a gift of a BearCat armored vehicle. This is but one of the many surreal images in Craig Atkinson's "Do Not Resist," a furious and often terrifying documentary about the militarization of US police.

The council eventually says yes to the monstrosity, just as seemingly every municipality in the United States eventually says yes to gifts of all-terrain vehicles, tanks, rocket launchers, flamethrowers, mines and the like, even when the community has almost nothing in the way of serious crime. This trend began in earnest in the 1970s, when municipal police departments responded to civil unrest and increasingly violent street crime by creating police tactical units, schooled in urban warfare tactics and armed with automatic rifles. Militarization escalated after the attacks of 9/11. Fear of terrorism led to the creation of the Department of Homeland Security and an unprecedented buildup by police departments nationwide—not just in major cities, which suffer serious crime and actual terrorism on occasion, but in smaller towns as well, where there's generally not much going on except Barney Fife fantasies of machismo.

Atkinson's film explores this build up of weaponry, but it also shows how police rhetoric has been pumped up on rhetorical steroids. In seminars and tactical rehearsals, we hear civilians referred to as "the enemy." And in one of the film's most appalling scenes, from a Senate committee meeting in 2014, the Deputy Undersecretary of Acquisition for the Defense Department is asked to explain why the military is giving bayonets to local police in the United States. Bayonets are for war.

The illogical endpoint of all of this is scenes like the ones that occurred in Ferguson, Missouri. This tragedy is folded into the narrative as an example of how legitimate civilian protest is treated as enemy activity by police, who then roll out their latest toys and look for excuses to use them. Instead of nurturing a sense that the police are connected to the communities they are supposed to protect and serve, the rhetoric and weapons instill the idea of the forces in opposition, one side a threat and the other the answer to the threat. This is a fascist mentality, the opposite of democratic ideals.

A major downside of this documentary is the tone, which is alarmist to the point of evoking a horror film. I realize that provoking outrage is a big part of the point of a work like this, but you still have to wonder how many people who've bought into the new mentality of American police might be persuaded to share the filmmaker's point of view, and actually sit through more than five minutes, when it comes at them as hard as this one does. At the risk of complaining about a film that might've been rather than praising the one that's in front of me, I have to wonder if a calmer, more reflective tone might have benefited the project in the long run. Anyone who already agrees with the movie's arguments likely won't have any problem with its methods, but a larger opportunity to open minds might've been lost somewhere. Still, this is an important film that marshals an impressive array of facts and builds them into a story that needs to be told. 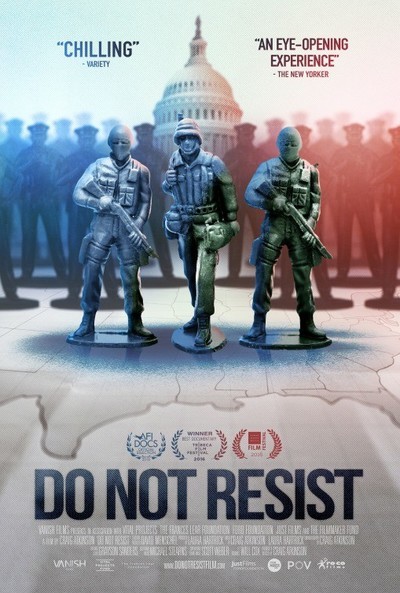