Divide and Conquer: The Story of Roger Ailes

A harrowing media horror story, “Divide and Conquer: The Story of Roger Ailes” opens on the night that director Alexis Bloom sees as the culmination of Ailes’ own dream, whether he saw it that way or not: the nomination of Donald Trump as Republican presidential candidate at the GOP convention in Cleveland Ohio.

The movie then moves some miles east, to Warren, Ohio, birthplace of Ailes, who died in 2017 and is best known as the mastermind of Fox News, which played such a decisive role in grooming Trump for his presidency, and continues to unwaveringly support it (except for that one hour when poor Shepard Smith is on the air). It is here that Ailes grew up All American, so to speak. Bloom exhumes a childhood friend some may be surprised by: the character actor Austin Pendleton, who recalls Roger not just as a Republican (albeit an Eisenhower Republican, now an extinct political species) but as “the handsomest man you could imagine.”

By the times Ailes left Fox News in disgrace, dogged by sexual harassment allegations and lawsuits, he had not only lived up to George Orwell’s adage about each man acquiring the face he deserved by the time he reaches 50; he had expanded the truism to his entire body. From Mike Douglas to Richard Nixon to Rupert Murdoch, each of the deals Ailes made only expanded his paranoia, his desire to make enemies and then battle them to the death. In his Fox News offices he had bulletproof glass, armed guards, and he once had a practicing Muslim on the Newscorp payroll banned from his floor because he got spooked by the sight of the guy. This movie reveals he was first busted for illegal possession of a firearm all the way back in 1975.

“We have a desperate need to return to the basics,” Ailes is quoted as saying; he continues with an indictment against coastal “elites,” saying, “they don’t understand the people who grew up with values.” This movie hammers away at the fact that Ailes values talk was completely hollow, going into detail about his disgusting advances toward women and the vile recriminations he aimed at those who turned them down. Kellie Boyle, a marketing consultant who met Ailes while negotiating for a job with an unspecified “national committee,” tells of a dinner with Ailes and a limo ride after, during which Ailes bluntly told her “If you want to play with the big boys, you have to lay with the big boys.” Without taking the bait entirely, she asked just what his request would entail — would he be her sole “big boy?” “You might have to give a few blowjobs here and there but everyone will know you’re with me,” was the response. Bloom, whose last film was a moving portrait of Carrie Fisher and her mom Debbie Reynolds —one which conveyed both the hilarity and mutual exasperation of that relationship — gives a lot of screen time to Ailes’ female prey and elicits testimony both heartbreaking and infuriating.

Ailes’ death means, among other things, that we may not learn about the “everyone” that was complicit in Ailes’ reindeer games, and even when dealing with the depredations of Ailes’ star Bill O’Reilly, who left Fox shortly after his boss, it portrays Ailes’ house of horrors as existing in something of a vacuum.

This is one action-packed doc, so to speak, replete with eyebrow-raising factual tidbits, like the one in which Roger Ailes gets Mitch McConnell elected to the Senate. And eyebrow-raising clips, such as one of Ailes attempting to dance with Cindy Lauper. Bloom goes out of her way to empathize with Ailes in some respects, as in her citation of Ailes’ hemophilia and speculation-by-montage that his lifelong fear of the condition (which did indeed contribute to his death) also informed the paranoid style of Fox News. But the very sad particularities of his personality quirks do not ultimately make Ailes any less repellent.

And there are plenty of Fox News’ greatest recent hits replayed here; O’Reilly’s avowal that “Barack Obama has deep emotional ties to Islam” begets Kimberly Guilfoyle (now Donald Trump, Jr.’s girlfriend) unhinged and unfounded claim that Obama wants to bring Sharia law to America begets, or at least aids and abets, Donald Trump’s Obama birtherism. The movie connects a lot of ugly dots without even seeming to break into a sweat.

If the picture has a flaw, it’s in Bloom’s overindulgence of Glenn Beck. I can see why the apostle-turned-apostate narrative Beck offers has some appeal, but the guy himself remains such a self-aggrandizing crock that the impact the filmmaker clearly hoped for is ameliorated the longer Beck is allowed to bloviate. “How am I now in this position of where I’m the most polarizing, divisive figure in the country?” he asks, as if he’s unaware of the bile he was actually spouting at the time. Citizen, please.

Amid all the jaw-dropping tales of bullying behavior (including among the natives of Cold Spring, New York, where Ailes bought property and tried to gain the benefit of being a big fish in a small pond), there is a constant and almost mordant acknowledgement of the one thing that Ailes was scarily right about: that no public official will ever again be elected “without the skillful use of television.” 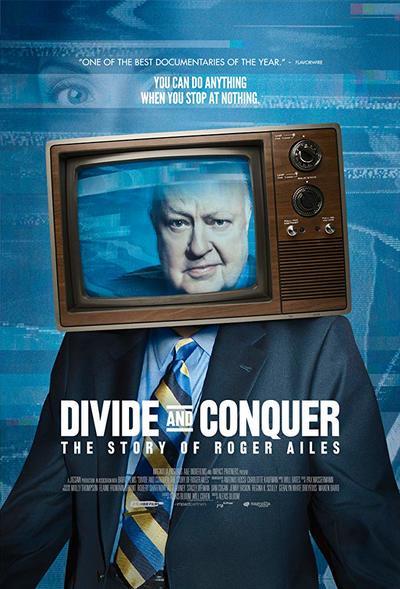 Divide and Conquer: The Story of Roger Ailes (2018)

Roger Ailes as Himself

Glenn Beck as Himself