According to "Dislecksia: The Movie," the number of dyslexic people hovers between 15 and 35 million. Harvey Hubbell V's documentary opens with this onscreen graphic before embarking on an exploration of the learning difference that affects 3 out of 10 British millionaires, numerous celebrities, inventors, politicians, famous people and the documentarian himself. "Dislecksia: The Movie" is equal parts confessional, celebrity interview, activism, in-depth discussion, and cheerleader for the afflicted. It's packaged in an easygoing 83 minutes that sometimes gets too cutesy for its own good but never wears out its welcome. It's getting a theatrical release, but its truer purpose would be best served on screens in schools across the country.

Hubbell, an Emmy-winning filmmaker, anchors "Dislecksia: The Movie" with his own story. Born in Connecticut in 1959, Hubbell narrates the tale of a carefree young boy for whom the bottom was about to drop out. "Life was good," he tells us, "until I went to school." Once he hit third grade, his learning issues were misinterpreted by numerous teachers, who assumed he didn't care or was incapable of grasping the material. Hubbell recruits Steven Link, his guidance counselor from 6th to 12th grade, and his two sisters to provide backstory and personal anecdotes. Hubbell also interviews his father, who responds with the matter-of-fact bluntness that fathers sometimes employ: "Harvey didn't know what the heck to do," says the elder Harvey Hubbell.

"3rd grade is the wall for dyslexic kids," one interviewee notes. The focus on reading and language becomes more prominent, and dyslexics, being more visually inclined, suffer with this change. The most interesting comment about this switch from pictures to words results when Hubbell asks a silly question about dyslexic cavemen. Hubbell's rationale is that, since cavemen drew pictures rather than wrote, nobody would have been dyslexic. "No one had ever heard of dyslexia until the invention of the printing press," we're told. "A technological change in the culture disabled a whole bunch of individuals."

Hubbell parades several of these individuals before his camera, starting with actor-writer-director Billy Bob Thornton. Thornton, like many of Hubbell's subjects, contacted him once he heard about "Dislecksia: The Movie." Thornton is an engaging interview, discussing how someone with a reading issue could write an Oscar-winning screenplay. He discusses his script writing procedures, which include writing in longhand, and shows us the results via his latest screenplay. Hubbell then asks Billy Bob the one question I wanted to know: "What do you see when you read?" I won't spoil Thornton's answer, except to say it wasn't what I'd expected. He bucks the common belief that dyslexics see letters backwards or upside-down.

Even more impressive is Stephen J. Cannell, the award winning creator of more than 40 TV shows including "The Rockford Files." Cannell, who wrote over 450 scripts, speaks candidly about flunking twice in high school and spending money he barely had on a typist early in his writing career. (If you've ever seen Cannell's company logo at the end of any of his shows, that latter fact is rather amusing.) Cannell calls his dyslexia his "special gift," and like many of the people Hubbell interviews, considers the learning hurdles he faced as the reason for his success.

As Hubbell visits each of his institutes of learning, he shoots the school buildings in horror movie fashion. For this documentary's subjects, school was a terrifying ordeal. Actress Sarah Joy Brown tells us she'd rather have been hit by a bus than read something out loud in school. Jo'Von Wright, a senior who was once told by a guidance counselor that she had no chance at higher learning, spins a heartbreaking yarn about being teased by peer and educator alike. Eric Steinberg recalls being taken out of class to go to remedial reading, where the teachers referred to students as "stupid." Thornton and Joe Pantoliano tell similar tales of the agonies of their school days.

Unfortunately, Hubbell undercuts these effective moments with goofy stock footage of historical figures "reading" his teachers' comments about his schoolwork. I understand why these, and other moments of light-hearted silliness exist in "Dislecksia: The Movie," but for each successful piece of shtick (a guy telling "dyslexic jokes," for example) there are two that made me shake my head. They provide the film with a distinct personality, and I can see them being a hit with younger viewers, but I found them more distracting than effective.

Still, Hubbell is to be commended for cramming this much information into a short running time, and for imbuing it with passion, anger and warmth. "Dislecksia" is especially hard on the way students are taught to read in the US, social promotion, and the lack of support for dyslexics. "They gave me a diploma," Hubbell says, "but they didn't give me the skills to fill out a job application." He shows the alternative methods of several schools in the NYC tri-state area that cater to those with learning difficulties. One school sends several of its students to the rainforest to conduct research on the potential medical uses of spider silk.

Hubbell also gets informative sound bites out of doctors, teachers, and others who study dyslexia and ways to cope with it. A panel of doctors from around the world discuss the differences between the complexities of their native languages and the dyslexics they study. It is noted that both Einstein and Edison were dyslexic, and that Einstein didn't speak until he was 7 years old. (When Edison is asked about Einstein's theories, he responds he has no comment "because I can't understand them.")

"Dislecksia: The Movie" never sinks to "woe is me" histrionics and, for its light tone, has a surprising amount of bite to it. Hubbell finds successful dyslexics from all walks of life, each with an inspiring story to tell. The constant flow of information, and Hubbell's onscreen chemistry, make for a watchable documentary that ends with numerous ways for viewers to get involved. This is the film's greatest asset.

Hubbell's documentary is ultimately far more successful as an educational tool than a feature film, but that's not a bad thing. It's refreshing to leave a movie theater smarter than when you entered it. 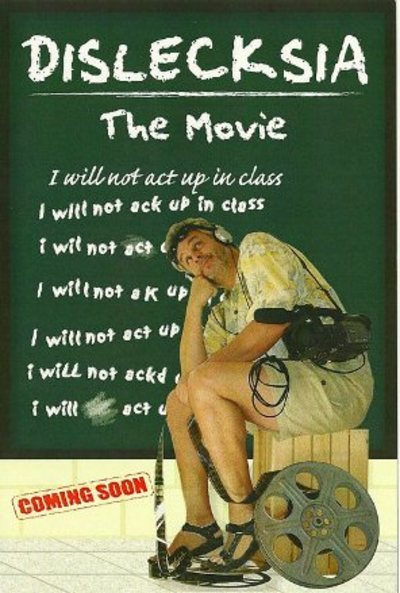