In a way, it makes sense that “Dig Two Graves” takes place mostly in 1977. Granted, it isn’t specifically tied to that date—people aren’t seen going to “Star Wars” while listening to Pink Floyd’s “Animals” and talking about the previous evening’s episode of "Three’s Company." But it does serve as a reminder of a time when a low-budget item like this could turn up, without loads of pre-release hype, and impress genre film buffs with its combination of smart storytelling and effective low-key performances, as led by a reliable supporting actor making the most of a rare lead role.

Set in a tiny Midwestern town, the story begins as teenager Jacqueline “Jake” Mather (Samantha Isler) is preparing to take a high dive into the local quarry, the kind of heedlessly stupid act tpeople that age are famous for doing. When she hesitates at the moment of truth, her brother Sean (Ben Schneider) agrees to jump with her but at the last second, she chickens out and watches as Sean jumps into the water and never comes out. With the help of her parents and especially her beloved grandfather (Ted Levine), who is also the town sheriff, she tries to move on but she is, of course, all but paralyzed with grief and guilt, all the more so since Sean’s body was never recovered.

One day, while walking home, she crosses paths with a trio of creepy gypsy moonshiners who live on the outskirts of town and show her a startling magic trick before making her an incredible proposition by claiming that they have the power to bring Sean back to life. There is a catch, of course—for the magic to work, another life needs to be sacrificed in exchange. They even have an ideal candidate in mind in Willie (Gabriel Cain), a geeky classmate with a barely disguised crush on Jake that she could easily use to lure him out to the quarry and give him one simple push that no one would ever find out about. Jake is appalled with the suggestion, of course, but just the possibility of having Sean returned to her is enough to inspire her to begin thinking about the unthinkable. What she doesn’t realize, however, is that her grandfather has a connection to the gypsies from a long-buried tragedy from 30 years earlier (which we see in a series of flashbacks) and that the fates of both Jake and Willie may be tied up in events that were set into motion long before they were even born.

“Dig Two Graves” is nominally a horror movie but it is not one filled with gratuitous gore and cheap shocks. In fact, the more overtly horrific moments on display are probably the least effective in the film. It's probably closer in tone something like the Stephen King novella The Body (the inspiration for “Stand By Me”) in the way that it quietly observes Jake as she finds herself coming of age while simultaneously struggling with both her grief and the great moral dilemma that has been presented to her—the horror arising not from some monster but by how easy it is for her to consider an unspeakable act in order to end her own suffering. Hunter Adams, who directed and co-wrote the screenplay with Jeremy Phillips, keeps the story moving at an unhurried pace that fits the material nicely and manages to move deftly between the two timeframes. In addition, the film, thanks to effective production design, is unusually successful in the way that it convincingly conjures up not one but two period time periods, an effort that is all the more impressive when you consider that it was done on what I can only presume was a relatively small budget.

The film is also anchored by two strong performances. The first is by Samantha Isler, a young actress who was not previously familiar to me but whose work as Jake is really impressive in how she exquisitely conveys the huge and painful emotions she's wrestling with, while at the same time coming across as a real teenage girl without any of the expected cliches. The other comes from Ted Levine, who has been given the chance at a rare lead role after a career that has found him as an uncommonly effective supporting actor (most famously as Jame Gumb in “The Silence of the Lambs”). He gives a wonderful performance as a man haunted by the mistakes of his past but who is nevertheless determined to do anything in his power to prevent them from touching his beloved granddaughter.

“Dig Two Graves” is not perfect—the occasional turns to the more occult-heavy material do not quite work and there are a couple of plot points that do not stand up to even modest scrutiny. However, those problems aside, this is an uncommonly smart, well-made and ultimately touching meditation on grief, revenge and the ordinary perils of adolescence that should resonate strongly with adults and thoughtful teenagers alike. There is no way that this film is going to be rocking any box-office charts this weekend, but I have the sneaking suspicion that if you see “Dig Two Graves,” it will stick in your mind long after your memories of chart-toppers have long since faded. 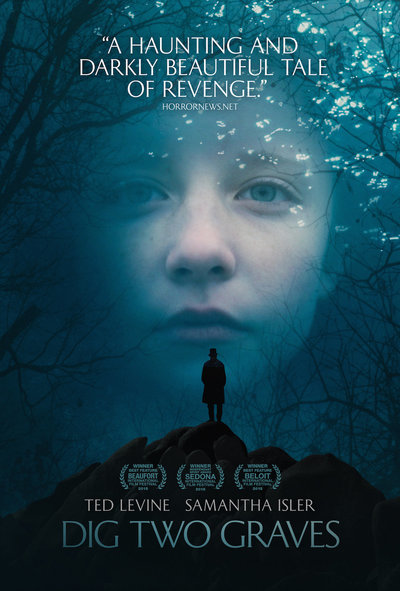