Among the many cultural casualties of the coronavirus was “Diana: The Musical,” which had just begun previews in March 2020 when the pandemic hit, closing the curtains and turning off the lights on Broadway. It’s finally making its way back on stage this fall, but before then, you can watch a filmed version of the production on Netflix—something you may want to do only if you’re a Diana completist.

Even so, you’ll probably find this song-and-dance extravaganza about the Princess of Wales to be frustratingly empty. There’s no shortage of innovative and insightful portrayals of Diana out there, from Kristen Stewart’s performance in Pablo Larrain’s upcoming drama “Spencer” to Emma Corrin’s Emmy-nominated work on another Netflix property, “The Crown.” In the decades since her untimely death, Diana has remained endlessly fascinating. But “Diana: The Musical” adds nothing novel or substantial to our understanding of her as a wife, mother, royal or celebrity. She remains one of the most famous and talked-about people on the planet, but this production merely rehashes in rushed, glossy fashion what we already know about her.

What’s perplexing is that “Diana: The Musical” was and will be in the creative hands of Christopher Ashley, director of the stage production and this filmed performance, which happened in summer 2020 in an empty theater with covid protocols in place. (Stick around through the credits to see behind-the-scenes photos of how the cast and crew found ways to work safely.) Ashley is also a Tony Award winner for his staging of the Sept. 11 musical “Come From Away,” and the director of an excellent filmed version which is streaming on Apple TV+. He knows how to take a theatrical production and make it feel immediate, alive and engaging for the home-viewing audience. Aside from some inspired, on-stage costume changes, “Diana: The Musical” feels rather staid and traditional, with a reliance on head-on shots from the audience perspective and not much attempt to make us feel immersed in the action the way “Come From Away” did.

Then again, the book and lyrics by Joe DiPietro (“Memphis”), with music and lyrics by his frequent collaborator (and Bon Jovi keyboardist) David Bryan, are so shallow and hurry through so much of Diana’s public and private life, they offer nothing that’s novel or meaningful for us to grasp onto. Spanning from her first flirtations with Prince Charles as a shy, 19-year-old nursery teacher’s assistant to her death in a Paris tunnel pursuit at 36, the show spells out everything the characters are feeling or doing, which we’re capable of seeing with our own eyes. The rock-infused tunes are peppy and polished but not terribly memorable.

Diana (Jeanna de Waal) gives birth to both of her children with Prince Charles (Roe Hartrampf) in the course of a single song, with pedestrian lyrics like: “Harry, my ginger-haired son/You’ll always be second to none.” The show’s attempts at satirizing the relentless media scrutiny she endured and the archaic standards of the monarchy she rejected have no wit or bite. There’s an entire number (“Snap, Click”) featuring predatory paparazzi dancing wildly around Diana in trench coats, reflective of a dated vibe that pervades throughout. And when it turns toward more serious territory, “Diana” only briefly touches on the depression and self-harm she suffered, and without any emotional depth.

De Waal is capable, if a bit stiff, as Diana, with a propensity for standing motionless with her hands folded politely in front of her. This is especially awkward during the song “The Rage” when Charles is scolding her. She’s supposed to be unsure of herself as the younger Diana but barely registers as someone who ultimately will have a profound impact on everyone she meets, especially later in her life when she’s clever enough to shine her constant limelight on causes like AIDS and landmines.

She is, however, up for the multitude of wardrobe changes asked of her—many of which occur right before us, and with a bit of trickery. Diana was, after all, a fashion icon, so there’s an entire song (“The Dress”) devoted to the sexy, black revenge number she wore to a gallery dinner while Charles was on television admitting he’d been unfaithful with Camilla Parker Bowles (Erin Davie). And when de Waal steps into Diana’s behemoth pouf of a wedding gown, I had to rewind and re-watch three times trying to figure out how she did it, so seamless is the sorcery. (Costume designer William Ivey Long recreates dozens of Diana’s most famous outfits, including the sweater with the little sheep on it.)

But speaking of Parker Bowles, Davie nearly steals “Diana” away from Diana herself as Charles’ longtime true love, pulling the strings behind the scenes. She has a much more powerful voice and sparky stage presence. And the veteran Judy Kaye pulls double duty as both Queen Elizabeth II and romance writer Barbara Cartland, Diana’s step-grandmother, giving her room to be both haughty and saucy. As the Queen, she also gets to show off her vocal range while telling her own story in the second-act tune, “An Officer’s Wife.” 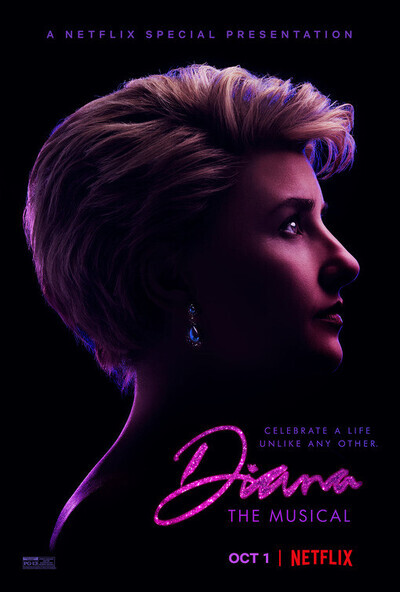