It doesn’t exactly sound like the stuff of a feel-good Broadway musical: On Sept. 11, 2001, 7,000 stranded airline passengers landed in the tiny town of Gander, Newfoundland, on the far, eastern edge of Canada, instantly doubling its population. Fearful, fatigued, and far from home, they were eager to contact loved ones and get back in the sky toward wherever they were heading. Many didn’t speak English. Nearly all of them were strangers.

Confusion reigned but kindness quickly conquered, with locals opening their homes and offering food, clothing, beds, diapers—whatever people needed to survive those disorienting days after the terrorist attacks shut down airspace. And from this story of connection and compassion came “Come From Away,” already a celebrated stage musical and now a film streaming on Apple TV+ in time for the 20th anniversary of 9/11. Tony Award-winning director Christopher Ashley and his wildly versatile cast and crew regrouped to shoot a performance of the show this past spring when the pandemic upended plans for a feature film to be shot on location. And what an oddly comforting feeling it is to watch a movie about a crisis in the middle of another crisis. Twenty years later, the caring gestures large and small depicted here carry a whole new resonance, a fresh sense of catharsis and even hope.

This description of this show may sound maudlin; it’s anything but. Beyond its heartwarming themes, this film version of “Come From Away” dazzles from a technical perspective—so perhaps it’s an accidental blessing that it had to be produced this way. Reminiscent of Spike Lee’s infectious depiction of “David Byrne’s American Utopia”—the best film of 2020, in my humble opinion—Ashley goes beyond giving you a front-row seat to enjoy the deceptive simplicity of the staging. Working with inventive cinematographer Tobias A. Schliessler and the nimble editors Virginia Katz and Leslie Jones, he puts you on stage, and sometimes behind it, and sometimes in the wings. We’re able to appreciate fully the work that goes into this production, which requires a dozen players to be in near-constant motion as they take on a multitude of parts, from townsfolk to travelers to flight crew. A quick shift of tables and chairs and some striking lighting cues transform a Tim Horton’s donut shop into an airplane cabin, a bar, an air traffic control center and more. The actors move seamlessly in unison, but each gets plenty of opportunity to create distinct characters and shine individually. At times they have to shuffle so quickly between parts, it makes you wonder how they kept it all straight, but no one ever misses a beat, an accent or an emotion.

Many of the original Broadway players who’d been with the show from the beginning reprise their roles here, including Sharon Wheatley, Caesar Samayoa, Q. Smith, and Jenn Colella, the show’s standout amid the talented, eclectic cast and a Tony nominee for best featured actress in a musical. Among her many parts is the key figure of Beverley Bass, the first woman captain of an American Airlines commercial flight; Colella’s performance of “Me and the Sky,” a song detailing her life story and how her worldview changed that day, is a highlight. Petrina Bromley, De’Lon Grant, Joel Hatch, Tony LePage, Astrid Van Wieren, Emily Walton, Jim Walton, and Paul Whitty comprise the rest of the terrific cast. One of several elements that make “Come From Away” so singular and so disarming is the fact that its actors look like regular people of various ages, body types, ethnicities, and walks of life. These are not glamorous stars, and their accessibility is among the movie’s many charms.

The book, music, and lyrics from the Tony-nominated, husband-and-wife team of Irene Sankoff and David Hein leans hard into the self-deprecating, aw-shucks nature of these Canadian characters in a way that may seem hokey at first. There’s plenty of fourth-wall breaking and good-natured chuckles about hockey, whiskey, and moose blocking the road. From the mayor to the police chief to the local TV reporter to the lady who runs the SPCA, they are unflappably perky and knowingly so. But establishing the sunny nature of this place sets the tone for the welcome they provide to 38 planeloads of people without giving a second thought, and it offers a stark contrast when they finally force themselves to take a breath and confront the horrific events that have transpired.

For the most part, though, “Come From Away” is breathless in a way that will leave you in awe. The balancing act it achieves here is really something—the show is constantly evolving within a confined space, it’s robust yet intimate, and for all its artistic complexity, it manages to maintain a let’s-put-on-a-show scrappiness. A musical about the aftermath of 9/11 may sound like an eat-your-vegetables chore, but “Come From Away” is as comforting—and as layered—as a plate of poutine. 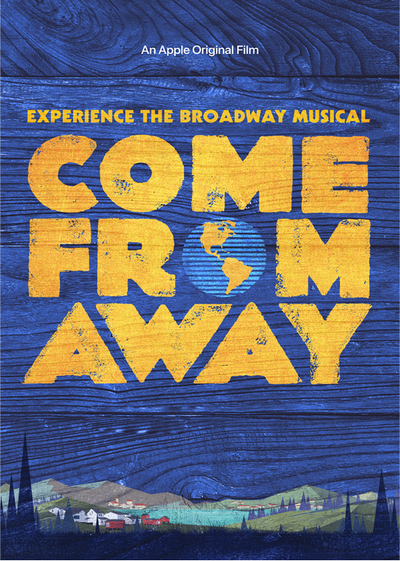 Jenn Colella as Beverly / Annette / Others

Joel Hatch as Claude / Others

Astrid Van Wieren as Beulah / Others

Petrina Bromley as Bonnie / Others

Jim Walton as Nick / Others

Sharon Wheatley as Diane / Others

Emily Walton as Janice / Others

Q. Smith as Hannah / Others

De'Lon Grant as Bob / Others

Paul Whitty as Oz / Others