Even though he came to prominence in the United States with his infamous Michael Jackson documentary in 2003, Martin Bashir had already become a household name in Britain thanks to his 1995 interview with Diana, Princess of Wales. It was a finely choreographed spectacle by the interviewer and the subject alike, and the initial reaction was how poorly this English Rose had been treated by those out-of-touch Royals. Once the hype wore off, it became evident that despite her efforts to present herself as a bird in a gilded cage, Diana was a more complicated woman: honest and manipulative; conniving and naïve; ruthless and vulnerable. So, you know, human.

Oliver Hirschbiegel's new biopic "Diana" is devoid of such subtleties, and presents the former Royal as some sort of martyr. The tragedy that befell her doesn't require embellishing: the death of any mother-of-two at the age of 36 is horrible. Yet Hirschbiegel's film insinuates that Diana began dying years ago, when her celebrity, aristocracy, and regimented life prevented her from holding on to her one true love. Fictionalization is par for the course in films of this ilk, yet Diana's portrait of a lovelorn celebrity who just wants to "live a normal life" rings particularly peculiar. For viewers for whom the real-life Diana comes with heavy baggage, it will be impossible to sympathize with the grotesque caricature on screen; for those unfamiliar with the princess, the effect will be even worse. All of us have all loved and lost, but not all of us are members of the British upper class who gave birth to the future king of the United Kingdom and of the other Commonwealth realms.

To her credit, Naomi Watts does a more-than-passable job of playing Diana. The Australian actress has mastered not just the character's polished cadences, but also her trademark faux-shy eyes that used to hide behind those well-curled eyelashes. But the material she is given inhibits the actress from creating a fully-rounded human being. Stephen Jeffreys' script—based on the book "Diana: Her Last Love" by Kate Snell—is simply awful.

The film depicts the final two years of Diana's life when the former Princess of Wales embarked on a relationship with the Pakistani heart surgeon Hasnat Khan, who is played as a lumbering oaf by former "Lost" star Naveen Andrews. Alas, the two lovers find it increasingly difficult to keep their affair private under the scrutiny of the British press and public. Their eventual split is soon followed by Diana shacking up with Dodi Fayed (Cas Anvar) in an attempt to make her former lover jealous. So the whole thing's like Rachel and Ross's relationship in Friends, but less dramatic.

It is not just the clunky and graceless dialogue that is the problem, and had the film descended into the depths of kitschy melodrama, I might have even enjoyed such choice lines as Khan's description of heart surgery: "You don't perform the operation, the operation performs you." Alas, he fails to riff on another clichéd advertising slogan: "Bedding Princesses: It's not just for Royals anymore!"

No, the real problem is this strange non-reality that has been crafted of Diana's life. The film completely ignores Queen Elizabeth II and Prince Charles, so we are presented with a one-sided view of the princess, whose worst sins are, in her own words, "acting like a mad bitch" every now and then.

This sheer lack of insight hollows out a core that wasn't that dense to begin with. Despite the efforts of everyone involved to paint her as Our Lady of Broken Hearts, the Diana of the film comes across as someone totally obsessed with herself, and devoid of any concern for the bonds of human society. A greater institutional or historical context could have provided the film with much-needed perspective (the question of what Royals thought of Diana's affair with a Muslim man is ripe for drama). As is, though, the film is merely obsessed with the cult of personality of "Diana, the Queen of Hearts." Of course, this has the opposite effect of cementing the Republican view of the British monarchy and aristocracy as greasy, grasping spivs who think that they are burdened with uniquely hard work and want to tell everyone about it. This narcissistic quality is the film's true undoing. 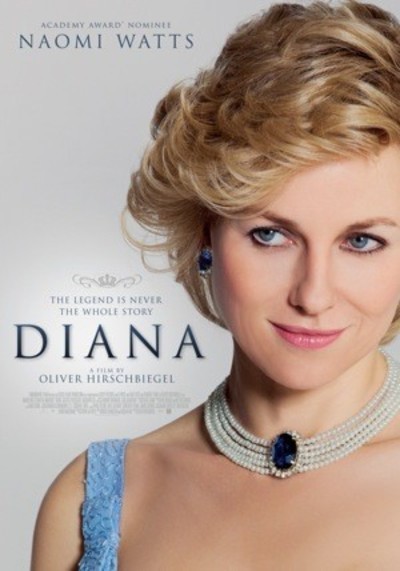