The release of "Detective Chinatown 2" is a noteworthy event, in that its the rare non-English movie to get distribution from a major American studio (Warner Bros) and all on the occasion of the Chinese New Year. But fear not, those who are unaware of the first “Detective Chinatown”—the shenanigans here are so broad, with two mismatched detectives trying to solve a twisty case in a limited amount of time, that seeing the original is far from a requirement. The only advantage you’ll have is being more familiar with the now-franchise’s cartoonish world, where heavy slapstick, hammy dramatic twists and a very slap-happy sense of humor are treated as an international language.

Director Sicheng Chen's “Detective Chinatown 2” centralizes these antics in a chintzy travelogue’s idea of New York City, with Times Square, Union Square, Chinatown and Taylor Swift’s “Welcome to New York” prominently featured. Our guides through this outsider’s view of New York are calculated boy genius detective Qin Feng (Haoran Liu) and his high-energy, squeaky-voiced uncle Tang Ren (Baoqiang Wang), also a reputable detective but with far less grace. The two are mismatched from the beginning, with Tang Ren appearing bombastic, boyish and clumsy, but with a knowledge of ancient Chinese culture that always seems to lead to the missing clue. Chen dresses up Qin’s brilliance, on the other hand, with extensive CGI sequences where he can visualize a map of New York City, going so far as to pull out buildings like he was playing with a toy set. But this is another moment in which the movie is better at being flashy than logical, a detective movie that uses its wit for cheap tricks than any truly clever slights of hand.

The two detectives are in America to try to get a five million dollar reward for solving the case of the Chinatown of a wealthy man’s son, competing against other detectives who are created with even more broader strokes than they are: two bald twins, a muscle man who could be Jason Momoa’s stunt double, a young woman with blue hair who can hack everything, a man dressed up like Sherlock Holmes who works with his daughter, and more. True to how the first “Detective Chinatown” plays out, there are many unexpected turns during the investigation, like in how a prime suspect becomes a third member of the crime-solving duo. Soon enough, they’re all being chased throughout the city and by the goofiest of bad guy goons, all while trying to solve a central question that a fair share of viewers will figure out before the end of the opening credits.

Better with its action than its comedy, many of the jokes involve crude stereotypes like armed people of color or easy jokes like homosexual biker gangs; it also never passes up the chance for a lame joke about men wearing women’s clothes. “Detective Chinatown 2” is thoroughly irreverent to say the very least, but would be more amusing certainly if other parts didn’t feel like it came from America becoming a type of dystopia with bright lights. A lead character has a sincere fear in the movie about being an illegal immigrant, and his detective counterparts have their own anxieties about being among New Yorkers. There are plenty of moments that will have international audiences laughing at America: when a sourpuss police chief with a Trumpian haircut says we should “also build a wall in the west,” what does that say about us?

Chen continues to show that he has a strong balance of style and storytelling, creating visual jokes out of packed sequences and telling his story in a way that’s in-your-face, but in a manner that you don't want to look away. His most immediate English-language equivalent is someone like Edgar Wright, who shares the same values of orchestrating snappy sequences with snazzy shots and edits, rewarding audiences with a story that hop-scotches from one weird thing to the next. Even if it's not that funny, “Detective Chinatown 2” proves to be snappy and persistent, complementing its bright color palette and energy with basic goals to alternate between silly, dark and slightly clever. I can’t give the film my most immediate recommendation, but for anyone concerned about the case of the missing modern buddy cop comedy, “Detective Chinatown 2” is an acceptable placeholder. 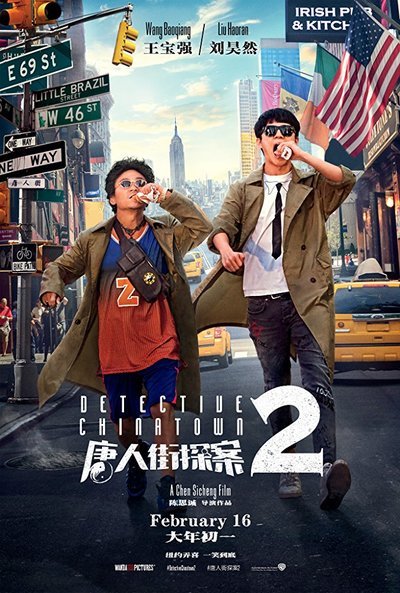