In these dispiriting days as we continue to grapple with the magnitude of our failure in Afghanistan, where nearly two decades of war has resulted in the country merely moving back to square one, Greg Barker’s latest documentary, “Detainee 001,” does little more than add to one’s mounting despair. The film is scheduled to premiere on Showtime one day prior to the twentieth anniversary of 9/11, and it was spawned from an invaluable bit of footage that Barker had originally gathered for his 2017 documentary, “Legion of Brothers,” which centered on the first Special Operations units in Afghanistan. It consists of an interview conducted by CNN journalist Robert Pelton with John Walker Lindh, a Taliban member captured as an enemy combatant following the deadly uprising in the last days of November 2001 at Qala-i-Jangi prison. Lindh responds with an accent that suggests he had been speaking Arabic all his life, yet as Pelton probes further with his questions, he realizes that the bearded man he’s conversing with is a 20-year-old U.S. citizen from Marin County, California. It’s not long before Lindh becomes one of the most reviled men in the United States, dubbed by many as the “American Taliban.”

An investigation into who this man is and what led him to do what he did would be an enormously fascinating subject for a film, but “Detainee 001” barely scratches the surface. All we hear are previously reported biographical fragments that preserve Lindh’s status as a frustrating enigma. At age 12, he first became interested in Islam after seeing Spike Lee’s great 1992 biopic “Malcolm X,” in which Denzel Washington powerfully delivered the late Black Nationalist leader’s 1964 speech that declared, “We didn’t land on Plymouth Rock; the rock was landed on us.” Lindh converted to Islam at age 16, and the following year, he traveled to Yemen to study Arabic for ten months. He would return to Yemen only two years later, and eventually relocate to Afghanistan where he planned to join the Taliban in their battle with the Afghan Northern Alliance. The other crucial footage contained in Barker’s film reveals the events of November 25th, 2001, the date of Lindh’s capture and the subsequent uprising of his fellow prisoners. Violence erupted just seconds after Lindh was interrogated by CIA agent Mike Spann in a most unconventional manner—outdoors and in full view of his fellow inmates—which may have been why he kept his lips sealed. Though the details of Spann’s murder, which occurred at the beginning of the uprising, weren’t captured on film, his daughter Alison remains convinced that Lindh could’ve intervened and is guilty, at the very least, of acting as an accessory.

What’s conspicuously missing from Barker’s film is any indication of what led Lindh, a year later, to address the court at his sentencing hearing and apologize for aiding the Taliban, admitting, “Had I realized then what I know now, I would never have joined them. […] I never understood jihad to mean anti-American or terrorism.” He had come to the conclusion that Osama Bin Laden was no friend of Islam, though this alleged epiphany can only be found in the film’s production notes. It also contradicts the way in which certain talking heads assembled by Barker portray Lindh as an “unrepentant” fanatic. CIA agent Gary Bernstein angrily voices his belief that Lindh should’ve been hung, while author John Wray—whose book, Godsend, was directly inspired by Lindh’s story—describes the blowback he received after arguing that the ignorance and intolerance of the American people play an unmistakable role in breeding terrorism. Homegrown terrorism can hardly be considered a shock in 2021, especially in light of the January 6th insurrection spurred by the same consistent stream of alternative facts that has caused half the U.S. population to avoid protecting themselves and others from COVID-19. Whether Lindh was a criminal mastermind or a misguided kid caught in the crossfire, there’s no question that we, as a collective society, played a role in his evolution, yet the film doesn’t dig deep enough into this fact.

Perhaps because Barker, as he has gone on record saying, was unable to obtain the participation of Lindh’s family, lawyers, the officials who oversaw his detainment or even, apparently, Lindh himself—whom he only see in Pelton’s grainy footage, where he repeatedly objects to being filmed—far too much of the film’s running time is devoted to people on the periphery of the narrative. We briefly sample the outrage of Jesselyn Radack, former ethics officer of the Justice Department, whose story of how she was forced out of her job after her inquiry into the unlawful treatment of Lindh deserves to be the subject of its own movie—and it was, thanks to James Spione’s 2014 doc, “Silenced.” The tearful interview with Alison Spann is moving on its own, as she recalls how eye-opening it was for her to meet her late father’s Muslim comrades, yet even her scenes are occasionally undermined by Claude Chalhoub’s incessantly gloomy score, which is laid on far too thickly. The trial recreations also add an unnecessary layer of artificiality to the picture with their dramatized readings of court transcripts. Far more compelling is the archival footage itself, which alone makes the film worth seeing, yet editor Langdon Page’s interest in contriving suspense tends to get in the way of exploring Lindh’s psyche with sufficient depth. Rather than investigate the reasons behind Lindh’s devotion to Islam, we’re treated to recounted moments of tension, such as when an orange in Lindh’s pocket is mistaken for a grenade.

The epilogue of “Detainee 001” seems especially rushed, as if it’s attempting to squeeze the rest of its bullet points into a required 90-minute running time. We’re informed, without much explanation, that eight of the ten charges facing Lindh had been dropped, resulting in him serving a prison sentence that ended in 2019, a stretch of time that could’ve easily served as the film’s third act. The sole thing we learn from that period is that Lindh won a lawsuit six years before his incarceration concluded that enabled him and his fellow Muslim inmates to pray together. What this film reaffirmed for me, more than anything, is that the voices of Afghans, whether they be native inhabitants or transplants, must not be drowned out in our current discourse, especially those of whom who were left behind on the tarmac. 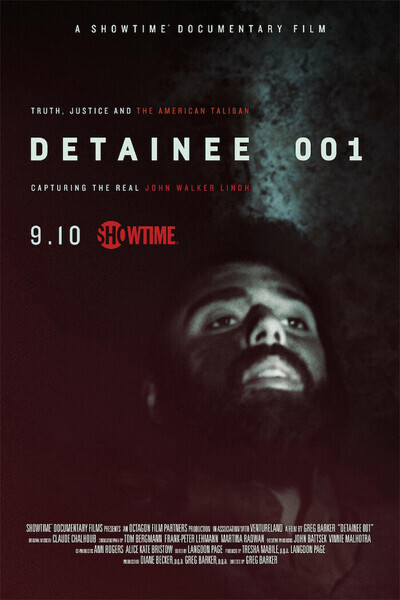