With its combination of an unapologetically pulpy basic concept and overt sociopolitical commentary, “Desierto” seems like the kind of movie that the late, great Sam Fuller himself might have cranked out if he were still making movies. If he had, however, one hopes he might have done far more with the material than Jonas Cuaron (the son of Alfonso, with whom he co-wrote the blockbuster “Gravity”) has accomplished. What should have been a solid B-movie thriller with a premise torn from today’s headlines is instead as arid and desolate as the land between the United States and Mexico in which it is set.

Gael Garcia Bernal stars as Moises, a Mexican man who joins a group of a dozen immigrants trying to illegally cross the border into the U.S. so that he can be reunited with his son in California. The journey first runs into trouble when the truck they are riding in breaks down and they are forced to continue their journey across the scorching desert on foot. Then the group gets split up with Moises’s lagging far enough behind to be at a safe distance to witness the arrival of Sam (Jeffrey Dean Morgan) with his truck and trusty German Shepherd, Tracker. At first they fear he is part of the border patrol but things become much worse than that when Sam pulls out a sniper rifle and picks off all the members of that first group one by one. Stuck in the middle of nowhere, Moises must figure out a way to survive and make his way make to civilization, while the numbers of his fellow travelers are brutally reduced by their relentless pursuer.

In other words, “Desierto” is yet another cinematic riff on “The Most Dangerous Game,” the old chestnut about people in remote areas who are stalked and killed like wild animals by jaded hunters looking for a new kind of game that has inspired both legitimate adaptations (including the 1932 classic from future “King Kong” producers Merian C. Cooper and Ernest Schoedsack) and knockoffs starring actors ranging from Robert Reed (the MST3K favorite “Bloodlust”) to Arnold Schwarzenegger (“The Running Man”). This is one of those story concepts that speaks to audiences so directly that anyone utilizing it almost has to go out of their way to make it not work on at least some primal level. Add in the material involving the conflict between those who want to cross the border into the U.S. in order to seek out a better life and those who will go to extreme lengths to keep them from sneaking into the country and all the elements are there for a film with the potential to offer viewers visceral thrills as well as something to think about afterwards.

A pity, then, that Cuaron and co-writer Mateo Garcia are unable to do much of anything with such potential promising material. They have taken a stripped-down approach to the story that eschews things like character development and motivation for the kinetic thrill of the chase, a move that sounds interesting in theory but results in a story in which there is no real investment in any of the characters aside from Moises, and therefore no particular interest in which ones live and which ones die. At the same time, Sam is not an especially interesting villain either, especially when the demands of the screenplay require that he transform from the crack shot that we see knocking people off from seemingly impossible distances in the opening scenes to someone who cannot hit the broad side of a barn during the later ones. Tack on some crashingly obvious symbolism (note the names of the protagonist and antagonist) and a general lack of dramatic suspense and the result is a slog of a film that makes “Machete” seems nuanced and logical in its depiction of U.S./Mexico border tensions by comparison.

Advertisement
There are a couple of compensating factors to be had here, to be fair. Cuaron proves himself to be more adept as a director than as a writer and comes up with a couple of sequences here and there that are relatively well-staged, including a couple of nasty deaths, even if they provide nothing more than a few empty and meaningless thrills. Bernal and Morgan both do about as much with their thinly drawn roles as they possibly can even though it is the dog playing Tracker who winds up turning in the best performance. The cinematography by Damian Garcia does an excellent job of finding an eerie beauty in such a desolate landscape and he comes up with a killer opening shot that raises all sort of promises that the film is ultimately unable to keep. Ugly and ham-fisted where it should be exciting and edifying, “Desierto” comes up short both as blood-soaked entertainment and as a blood-stirring polemic. 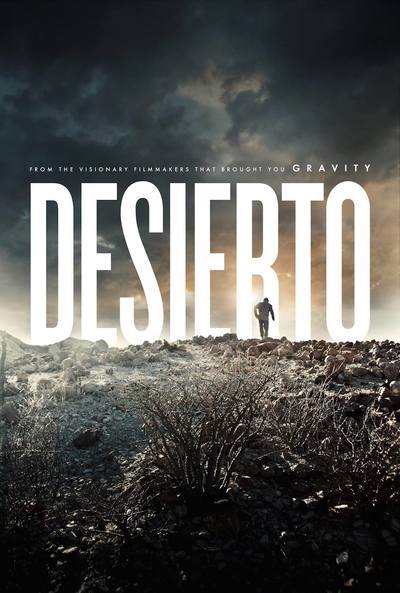