The just-shy-of-great teen comedy "Dear Dictator" is the rare high-concept coming-of-age story with enough warmth and smart-ass charm to (hopefully!) make it accessible for a fairly wide cross-section of moviegoers. Co-writer/director duo Lisa Addario and Joe Syracuse run farther than you might expect with a simple concept: what if Michael Caine, playing a Fidel Castro-looking dictator, befriended a teen girl ("Goosebumps" star Odeya Rush)?

I was ready to give "Dear Dictator" at least two stars for that premise alone, especially if Caine kept his Castro beard on for at least 30 minutes (spoiler alert: he does). But Addario and Syracuse give serious consideration to the conventions of this type of "Mary Poppins"-esque comedy, where an unlikely mentor helps a child—or in this case, young adult—decide whether she wants to be an unhappy contrarian, or a well-loved eccentric. Unfortunately, "Dear Dictator" eventually becomes the type of film its creators gently mock. But for the most part, Addario and Syracuse's comedy is a well-balanced mix of teen angst and adult humor. There are jokes here to satisfy everybody, from admirers of great mother/daughter comedies like "Gilmore Girl" and "Bunheads" to fans of bratty '80s slacker dude comedies like "Bill and Ted's Excellent Adventure" and "Repo Man."

A good part of this film's success depends on how seriously Addario and Syracuse take the emotional rollercoaster that is high school. Teenage misfit Tatiana (Rush) is so bored with her life, defined as it is by thong-wearing, smartphone-addicted rivals, and lousy mentors like desperate-to-please social studies teacher Mr. Spines (Jason Biggs) and manic mom Darlene (Katie Holmes). Tatiana especially resents Daralene because of her pathetic romantic attachment to man-boy dentist Charles (Seth Green), a married man who refuses to leave his wife for Darlene. Charles's deadbeat nature is treated as a given truth since Tatiana's perspective is implicitly confirmed right throughout most of "Dear Dictator."

So the funniest thing about Tatiana's decision to strike up a pen-pal correspondence with brutal British-Carribbean dictator Anton Vincent (Caine) isn't Vincent's capacity for monstrous violence. I mean, Vincent is as bad as people say he is, as we see when he shrugs off the news that he ordered the execution of a group of innocent citizens without any firm evidence. But Tatiana is almost always right, even when it comes to befriending a mass-murdering, rights-suppressing fascist. This joke is skillfully related during a letter-writing montage: Caine poses with a machete for a propagandistic photo shoot while also telling Tatiana, through voiceover, that "my people are dying and cannot medical supplies. My favorite color is purple."

As in "Bill and Ted," the joke is never simply on Tatiana, not even when she's so self-absorbed that she offers to entertain Vincent by making his daughter a mix-tape of Tatiana's favorite music, like the Meatmen, the Circle Jerks, and the Butthole Surfers. The best part of the joke is Vincent's mild-mannered reply: "Thank you for your lively music. My daughter enjoyed it. The rebels have surrounded the capital."

Addario and Syracuse's tendency of confirming Tatiana's biases can sometimes make their hysterical depiction of Darlene seem a bit unkind. That's not unexpected since parents often don't fare well in these types of comedies. Still, Darlene throws herself at Charles's feet (which is funny, as he has a foot fetish), and even tries to hit on Vincent, despite Tatiana's understandable protests. Darlene's so delusional that she even asks Tatiana to help her spy on Charles's house after he fails to respond to Darlene's text messages. One can't help but laugh at (an effectively) mean-spirited visual gag at Darlene's expense: a box of Hostess Ho-Hos snack cakes is conspicuously positioned in the camera's foreground in a scene where Holmes's character lectures her daughter.

Thankfully, there's an apparent sincerity to Holmes's performance that undercuts the most unbearably loopy aspects of Darlene's character. Darlene's affection for Tatiana is consequently always apparent, even if it's the hokey uncool-parents-tries-to-make-good type of parental love. Just look at the scene where Darlene huffily tells her daughter that she madeher sandwich just the way she likes it (extra sriracha sauce) riiiight after Darlene blows up at Tatiana for earning a phone call from her school's principal. Holmes makes the most of her character's juicier lines, like when she tells Mr. Spines that he can take his parenting advice and shove it somewhere indelicate. She also delivers a wonderfully incredulous side-eye to Rush when Tatiana tries to reassure Darlene of Vincent's real character: "It's ok, mom, he's not a creepy child molester—he's a dictator."

But while Addario and Syracuse ultimately go a little overboard in trying to re-assure viewers that Darlene is also right—and that Tatiana knows it—"Dear Dictator" does have a proudly juvenile charm that's deceptively hard to pull off. Many other filmmakers fail to do what Addario and Syracuse achieve because their jokes always seem to be at the expense of their characters. By contrast, Addario and Syracuse like Tatiana and Vincent enough to make sympathetically mock them both, and that makes a huge difference. Michael Caine's beard may be the film's main draw, but Addario and Syraucse wisely let his co-stars make him look good. 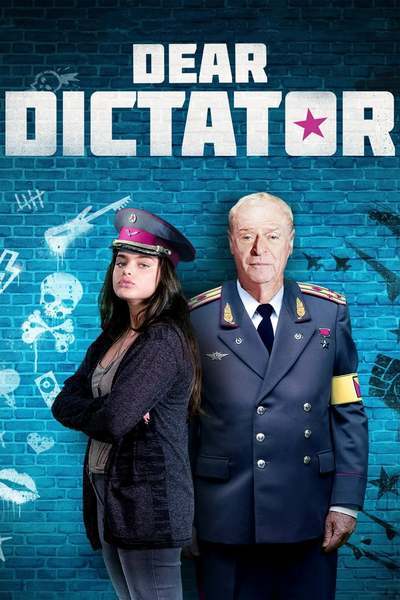