The world of R.L. Stine, the mega-best-selling author of VERY popular horror-but-you-know-for-kids books, is a very singular one. It is replete with cleverly conceived monsters that derive from classic adult or “adult” horror, but which are consistently and imaginatively skewed to a younger audience’s taste and tolerance. The point is to supply the requisite, um, goosebumps, but not traumatizing nightmares. Stine’s success is well deserved, and his stories have been adapted for television and direct-to-video realms, among others. A feature film foray into that world is a potentially challenging gig, but director Rob Letterman, aided by writers Scott Alexander and Larry Karaszewski and Darren Lemke and an energetic cast, rise to the occasion, delivering a movie that’s a lot of good creepy fun in spite of some dubious construction.

Scenarists Alexander and Karaszewski go big by constructing a meta-narrative that can contain an incredible number of Stine’s cheeky/scary monsters. The story begins with Amy Ryan’s educator mom Gale driving her and discontented son Zach (Dylan Minette) to their new home in what the kid believes to be the dullest spot in the known world, let alone Delaware. Things perk up a bit with the appearance of cute teen girl-next-door Hannah (Odeya Rush) but get hectic when Hannah’s tetchy, eccentric dad (Jack Black) butts in. At school, a wide-eyed nerd named Champ and referred to as “Chump” by the rest of his class (Ryan Lee) makes fast friends with Zach, and the two determine to find out exactly what’s up with the new neighbors. (It’s pretty plain that a big chunk of the movie got cut in order to get to the monster stuff faster, and the narrative does take some lumps on account of this.)

It turns out that Black is actually … R.L. Stine, or “R.L. Stine,” and what makes his books so good is that the monsters in them are real—they’re only contained when the manuscripts of the books in which they appear are bound and sealed. When Zach’s snooping accidentally unleashes an abominable snowman, a ventriloquist dummy named Slappy (a veritable doppelgänger for Black’s Stine) becomes the ringleader of an army of now-free creatures. Slappy’s plan is to take some sort of unspecified revenge on his, and their, creator, and wreak havoc on the town while they’re at it.

And so we get a series of horror set-pieces that are toned-down variants on the comedy horror scarefests of recent years. The scene in which Stine, Zach, Hannah, and Champ try to elude a gym-shorts-sporting werewolf in a supermarket evokes both “The Shining” and “Zombieland," while being milder than either. Speaking of “The Shining,” that book and its author are the subjects of several knowing and funny in jokes; the movie’s full of them. Although my conviction that the army of toy robots seen in a couple of shots is based on the toy designed by Fred MacMurray in Douglas Sirk’s ‘50s melodrama “There’s Always Tomorrow” might be a stretch on my part.

In any event, all the creatures, which range from the tiny robots to looming freeze-gun toting aliens to a giant mantis, are rendered very nicely in realistic computer animation, while the live-action cast is always engaging and often very funny. Stine’s character frequently refers to the all-important “twist” he builds into each story, and this movie has a twist of its own, a pretty daring one that expands on the initial reflexivity of the plot itself, while also making a convincingly heartfelt statement about the power of imagination and its earnest exercise. Lest I make this sound too heavy, it’s really not; the movie is breezy and fun, offering thrills for kids and a nicely nostalgic matinee vibe for adults. 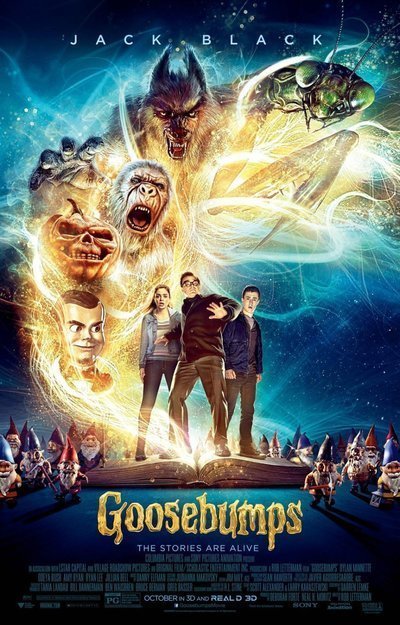 Rated PG for scary and intense creature action and images, and for some rude humor.