“Dead Night” is a prime example of the horror subgenre that the legendary drive-in movie critic Joe Bob Briggs used to poetically refer to as “Spam-in-a-cabin.” You know the drill—a small group of people drive out to a remote dwelling in the middle of nowhere for a few days of rest and relaxation unencumbered by neighbors, navigable roads or working telephones and, after the barest minimum of character development, find their numbers messily reduced by some entity ranging from a run-of-the-mill mad slasher to some kind of supernatural entity. If “The Evil Dead” (1982) and “Evil Dead II: Dead By Dawn” (1987) represent the high-water mark for this style of filmmaking and the various shabby knockoffs of “Friday the 13th” (1980) mark the low end (with the hilarious and audacious satire “Cabin in the Woods” deserving some position of esteem), then this one lands somewhere smack dab in the middle of the two extremes—it has a couple of interesting ideas, a certain degree of style and one impressive performance but never manages to pull them together into a cohesive or satisfying whole.

Following a prologue about which I will say nothing, the film picks up in 2015 as wife and mother Casey Pollack (Brea Grant) is driving her husband, James (AJ Bowen), teen children Jessica (Sophie Dalah) and Jason (Joshua Hoffman) and Jessica’s friend Becky (Elise Luthman) out to the middle of nowhere to spend a snowy spring break in a rented house near the woods. This is not exactly a pleasure vacation, however. James has been diagnosed with terminal cancer and, having been informed that the house is built over a rock deposit that allegedly contains medicinal qualities, Casey has decided that they should spend time there in the hopes that maybe something miraculous might happen. To be fair, it is doubtful that any of them truly believe in the house’s alleged healing powers but at the absolute worse, maybe they get to have one last nice vacation together. Besides, staying there for a few days can’t hurt, can it? (Spoiler Alert! It can.)

They have barely arrived and begun to unpack/notice that the phones are out and the wifi is nonexistent when things start going sideways. While out gathering firewood, James stumbles upon an unconscious woman lying in the snow and brings her back to the cabin, where Casey helps to revive her. This is Leslie Bison (Barbara Crampton) and while her rescuers don’t know it, we know that she is currently a dark horse candidate for the governor’s seat. Alas, once revived, she doesn’t act particularly grateful towards the people who have saved her life—she acts weird, asks a lot of discomfortingly personal questions and says things that she claims are jokes but which seem to be anything but. While Casey drives off to call an ambulance, the others try to put up with the interloper for as long as they can but once she returns, they decide it is time to give Leslie the boot. From there, let us just say that things get very, very sticky and that the pasta sauce from the soon discarded meal is not the only red-hued substance in abundance.

This may sound straightforward enough, I suppose, but screenwriter Irving Walker and director Brad Baruh have more than a few narrative curveballs to keep viewers on their toes. I wouldn’t dream of hinting at them—you wouldn’t believe me anyway—but I will point out that while these twists are certainly weird as can be, they don’t really had much of anything to the proceedings and in fact wind up bogging things down into confusion more often than not. A search online after viewing the film turned up the fact that after an unsuccessful festival premiere of an earlier version of the film, it was apparently reworked heavily into the version now in release. Having not seen the original cut, I cannot say what the differences might have been but if this version is considered to be an improvement, one can only imagine how confused it may have been the first time around. One narrative gambit that does work—to a point—is the conceit of interweaving the story of what actually happened to Casey and her family with a true-crime show rehashing of the incident that bears only the slightest traces of what really went down. This is amusing for a little bit but since the rehashes take great pains to tell us what happened to those who did not survive the night before actually showing their fates, they wind up short-circuiting whatever degree of tension that might have been generated had the story just been recounted in an ordinary manner.

The best thing about “Dead Night” is the presence of Barbara Crampton as the weirdo interloper. If that name rings a bell, you no doubt remember her from her reign as one of the leading scream queens of the 1980s—she achieved screen immortality as the subject of the most hilariously tasteless visual pun imaginable in Stuart Gordon’s gross-out classic “Re-Animator” (1985) and also turned up in such favorites as Brian De Palma’s “Body Double” (1984), Gordon’s “From Beyond” (1986) and the immortal “Chopping Mall” (“Where They Slash Their Prices—And The Customers!”) (1986). In recent years, her career has seen a resurgence as the people who watched (and perhaps occasionally paused) her films when they were younger have gone on to cast her in their own genre projects—in the last few years, she has been seen in the likes of “You’re Next” (2011), “The Lords of Salem” (2012) and “We Are Still Here” (2015) and will soon turn up in “Puppet Master: The Littlest Reich.” Her part here is largely removed from the kinds of roles that she has played in the past and it is fun watching her tear into things with undisguised glee and gusto. (That said, some of you may have recognized her name from the number of soap operas that she has appeared on over the years and if that is the case, I might gently suggest that this may not quite be the movie for you.)

I cannot really recommend “Dead Night”—not even the copious amount of blood and nicely retro special effects can distract from the fact that the whole thing is kind of a mess—though I suppose I prefer its unabashed junkiness to such current genre garbage pits as “Truth or Dare” or “Unfriended: Here We Go Again.” Well, let me put it this way—as a full price ticket, it simply does not provide enough of the goods to make it a worthwhile investment. At home on a Saturday night on cable with nothing else of note airing opposite it, I suppose that those with an affection for such films in general and Barbara Crampton in particular might get something out of it under those circumstances. Those audiences could do worse than “Dead Night” and face it, if they are contemplating a title like “Dead Night,” they have almost certainly done worse many times over in the past already. 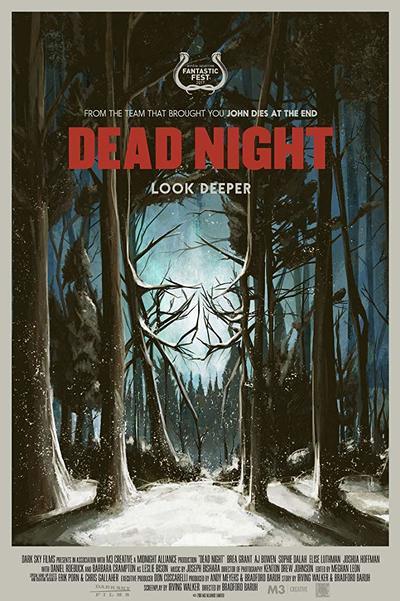