"Blumhouse's Truth or Dare" is the "Showgirls" of post-"Scream" slasher movies: it's not campy nor emotionally involving enough to be more than the sum of its ungainly parts. This is a PG-13-rated horror movie where college seniors are persecuted by a haunted version of Truth or Date, a party game that's more menacing than Twister, but not as dangerous as Spin the Bottle. There are ways to make such a campy premise—play by the rules, or be forced to embarrass yourself and/or hurt somebody—work, either through sincerity or capable snarkiness. The makers of "Blumhouse's Truth or Dare" attempted the former option by trying to make their hormonal protagonists just sympathetic enough that we care what happens when they try to impale themselves on a pool cue, or gouge out an eye with a fountain pen. Unfortunately, director Jeff Wadlow ("Kick-Ass 2," "Cry Wolf") and his three credited co-writers don't go far enough towards either of their film's primary impulses—humanizing their immature subjects and/or making them die amusingly sadistic deaths—making "Truth or Dare" feel like a genre movie that's at war with itself.

Let's start from the assumption that you should care about the teens in "Blumhouse's Truth or Dare" if you want to enjoy the spectacle of watching them play a potentially life-threatening slumber group activity. There are, admittedly, a handful of scenes that serve to up-end our canned expectations of who these twenty-somethings are, and what their pre-graduation lives are like. But many of these assumptions are based on superficial generalities, ones that would be better applied to a fluffier teen sex comedy set in high school. Several stock types vie for our attention. Our heroine is, of course, reserved Olivia (Lucy Hale), a moral-minded, smarter-than-average blank slate who gets roped into one last pre-college spring break by her flirty best friend Markie (Violett Beane). Markie brings along a number of their mutual best friends, including Ronnie (Sam Lerner), a leering but harmless horndog, and Brad (Hayden Szeto), a mostly indistinct supporting character whose most salient trait is that he's openly gay.

Brad and Ronnie are the most revealingly under-developed meat puppets in the film. Their peers are also treated like human-shaped props, since they also primarily serve to hold up the film whenever an expository line must be said or a co-lead's assumptions challenged. The sketch-thin nature of these characters isn't as offensive or bothersome: hot guy Lucas (Tyler Posey) is a prize for Olivia and Markie to fight over—though he does have a cute one-liner that suggests otherwise—and dickish law student Tyson (Nolan Gerard Funk) has all of the bite, and in-your-face attitude of a garden variety jock, a quality that's mildly amusing given his chosen area of study.

But Ronnie is a one-note joke who screams "no homo" before he is teased with the possibility of giving another guy a lap dance. As with Lucas, Ronnie has a moment where he suggests that he's capable of growing out of his adolescent need to hit on any woman in sight. But isn't college—or, at least, the version of college we often seen in movies—the place where young adults are supposed to learn who they are (or maybe who they want to be)? Why then is this soon-to-be-college grad neither villainous, nor good enough to warrant more than just a second of reflection? Shouldn't he—or, more accurately, Wadlow and his fellow co-creators—know what he is either going or trying to become?

And what about Brad? The poor kid's queerness is almost exclusively defined by his fear of coming out to his police officer father. The reaction that Brad's dad gives him after he comes out is supposed to be unexpected, but it's not, really, once you consider the confusing paternal tone that defines "Blumhouse's Truth or Dare." If this movie were a parent, it'd be the confusing cool dad who tries to rap with the kids about the dangers that they're going to face in the real world—despite the fact that those dangers are obviously cool dad's rose-tinted memories of the perils that he faced back when he graduated from college.

In this mixed-up, none-too-bright context, a sentient game of Truth or Dare is a messed-up parenting tool. These bright young things are gonna learn to be truthful to themselves, doggone it, even if it means hurting themselves or others during the learning process. Because apparently, stabbing yourself in the eye when you fail to come clean in a job interview is a fitting punishment. And surviving trauma—like considering ways to come clean to your best friend about your not-so-secret crush on their boyfriend—builds character.

"Blumhouse's Truth or Dare" is not that different from sadistic horror movies like the "Saw" and "Final Destination" films, franchises that also focus on a group of imperiled everypeople who are faced with a perversely life-affirming gauntlet that challenges their shared misapprehension that they're going to live forever. Once again, the joke is on our heroes, but this time, every cruel punchline is seemingly pulled at the last minute. We're supposed to like these victims, not gasp in horror and delight when they're compelled to die campy—but bloodless!—deaths by an evil game you play when you're kinda bored and kinda hormonal, but not imaginative or bold enough to do much about it.

Still, it's fitting that this confused and confusing horror flick is the first film produced by Blumhouse with the company's name in the title. Blumhouse is the studio that recently earned prestige for their crucial role in helping comedian-turned-filmmaker Jordan Peele make "Get Out," one of the best American horror films of recent memory. They've also produced Spike Lee's "BlacKkKLansman," which will screen in the main competition at this year's Cannes Film Festival.

Blumhouse is also the company that continues to crank out increasingly derivative sequels to polished, but unchallenging programmers like the "Insidious," "Paranormal Activity" and "The Purge" films. "Blumhouse's Truth or Dare" is closer to its title company's more formulaic horror films, but at times, its creators seem to struggle to say something more. Then the moment passes, and Wadlow's film goes back to being a slasher movie whose cruelty only ostensibly serves as a form of fatherly kindness. 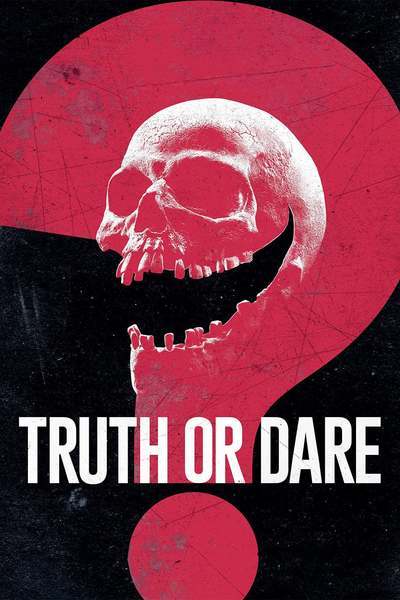