In overly generous terms, one could describe “Days of the Bagnold Summer” as a quirky coming-of-age tale told through a self-deprecating British lens with a tiny drop of kitchen-sink realness. But that indeed would be too charitable a shorthand for the directorial debut of Simon Bird, known mostly for portraying the misfortunes of Will McKenzie in the award-winning series, “The Inbetweeners.” Neither as sweet or profound as the fanciful American indies like “Ghost World” that clearly inspired it, nor all that insightful in its interpretation of a single mother’s universal struggles, “Bagnold Summer” is sadly a forgettable film, often too ironically close to being the kind of bore its central character Daniel’s accidental summer in the English suburbs threatens to be.

We meet Daniel (Earl Cave), a greasy-haired, stone-faced fifteen-year-old metalhead, in the midst of a forced shoe-shopping outing with his fifty-something divorced mother Sue (Monica Dolan). Deeply uninterested in any standard pair of black lace-ups he would need for an upcoming wedding, Daniel dismisses all of Sue’s suggestions curtly, just like he ignores every single mundane detail of his monotonous teenage life. The only thing that seems to mildly excite this flippant kid is the prospect of a warm Florida summer he’d get to spend with his dad who already lives there with his new family. But being the unreliable man he is, Daniel’s father cancels on him at the last minute, leaving him stuck in English suburbia with a caring yet unworldly mom who can’t figure out how to connect with her troubled son.

And so “Bagnold Summer” tells the story of that excruciating six-week-long period, in an adaptation of Joff Winterhart’s graphic novel by debuting scribe Lisa Owens. A librarian with an almost rebelliously untrendy and matronly wardrobe—costume designer Alison McLaughlin seems to have had some fun with Sue’s old-fashioned blouses and lumpy cardigans—Sue tries to put her best foot forward with Daniel, only to be often and rudely countered by her Metallica-loving, disobedient offspring. And nothing seems to be on Sue’s side in the world, not even an out-of-the-blue romantic affair with one of Daniel’s school teachers, a slimy, opportunistic ladies man played by a most welcome but utterly underutilized Rob Brydon. Meanwhile, Daniel also works overtime to make life miserable both for himself and his fretting mother, refusing to work, do basic chores, or even as much as brush his hair. How will the mother and son ever form a meaningful bond?

Rest assured that they do eventually in the downright predictable “Bagnold Summer.” Except, the film doesn’t bother to engage with the characters’ respective emotions in any meaningful manner. Cave’s Daniel never registers as something more than a distressed kid who’d be profiled as a disturbed loner in a much darker version of this movie. In that, “Bagnold Summer” doesn’t even concern itself with working Daniel’s Metallica affection into the story in any significant way—instead we get a semi-amusing scene in which he joins a group of kids’ band and a bunch of idiosyncratic, out-of-place Belle and Sebastian songs that play throughout the film. Thankfully, Dolan at least gives us a lot more to respond to. Vulnerable but never weak or breakable, Sue capably defies Daniel’s boorishness with her decisive tone and occasional drollness, earning our goodwill and respect as a result. It is thanks to Dolan’s committed airiness that the awkwardness of a beach trip between Sue and Daniel lands with some comic relief and that we buy Daniel’s eventual change of heart in the aftermath when he finally grows into the sweet kid that he is meant to be.

But despite Dolan’s lovely presence, “Bagnold Summer” is too flimsy and cringe-inducing an affair, burdened by an uninspired sitcom-y feel and a painfully sterile, sparse, and bright atmosphere that excessively tries to honor the film’s comic book roots. In the end, it all adds up to a bit too much whimsy for something that’s altogether not that imaginative. 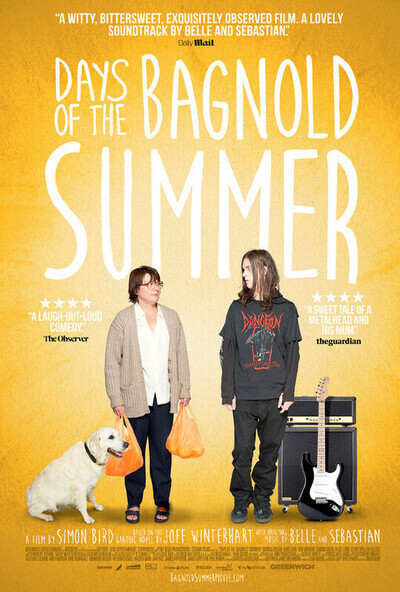