Dave Made a Maze

One thing needs to be cleared up right away. This movie is a quirky fantasy-adventure-comedy co-written and directed by Bill Watterson, in his behind-the-camera debut. Before you get all excited, it must be clarified: Not THAT Bill Watterson. The semi-reclusive “Calvin and Hobbes” creator has not made his way to Los Angeles to pursue a new vision that only the cinema can contain. No, this Bill Watterson is a film and television actor in his early 40s, two conditions that do inform this movie’s vision.

The movie begins with video footage of the title character, who asks of the folks behind the camera interviewing him that they not make him look “angry and spineless.” Apparently this is the aftermath of Dave’s project, an in-apartment maze (“labyrinth” is the more accurate term, Dave insists, and he has proof) that he made simply because, as he puts it, “I wanted to make something.” And apparently the thing he made has gotten a couple of people killed.

A title sequence shows Dave (Nick Thune) to be a creative type—a to-do board on one wall of his place instructs him to “Finish Concept Album.” But what he does instead one afternoon is construct a cardboard castle in his living room. His girlfriend Annie (Meera Rohit Kumbhani) comes home and Dave instructs her not to enter the thing. It’s bigger and deeper than she knows and he’s stuck in it, trying to find a way out. He asks her to call his best friend Gordon (Adam Busch) for assistance.

When Gordon arrives, he and echoey Dave launch into a bit of struggling-Hollywood-bro banter, or at least that’s what I assume it is. “Where’s that beard at?” Dave shouts. “The beard is on the face,” Gordon responds. Gordon has a beard, you see. Anyway, running counter to Dave’s directions, Annie has also invited all of Dave’s friends over. They all look like they’re headed for a Dan Zanes concert but forgot to bring the actual children for whom the concert is in fact intended. Among these folk is a camera crew—these are the characters who interview Dave, not after the adventure but in the middle of it.

The all-live action section of this movie is lit and shot almost exactly like an episode of “The Adventures of Pete and Pete.” That’s not a bad thing in and of itself, but as relatively swinging as it was, “The Adventures of Pete and Pete” was a children’s show. Once the party turns into a rescue party, and Dave’s pals all enter the labyrinth against his strident objections (the videographer yells “Don’t look at the camera,” just like in “Apocalypse Now,” ar ar ar), things get a little more visually interesting. Since the maze (labyrinth, sorry) is made of cardboard, the attendant visual effects, most of them in-camera, are deliberately low-tech and funky. There are gear-heavy booby traps. Characters are beheaded, or “beheaded,” but when they are, streams of red wool thread shoot from their necks. There’s a part of the labyrinth in which the characters transform into cardboard hand puppets. There’s a section in which the characters turn to black and white. At this juncture, Annie forgets how mad she is at Dave long enough to join him and Gordon in doing bad impressions of Robert De Niro in “Raging Bull.” There’s even a zoetrope. It’s all very Hipster Etsy. Keeping things tense is a Minotaur, some guy the filmmakers probably picked up around Gold’s Gym and put a cardboard horned head on.

I was wondering who exactly this movie was made for, and how I could avoid them, when in the middle of the picture Dave expels a cri de coeur, tied into the “I wanted to make something” riff. He says he hates the fact “that I still get money from my parents and I bore them,” which is so on the money I almost felt bad for the guy. This feeling dissipated as this movie, a “Fantastic Mr. Fox” for artisanal yogurt connoisseurs, ended, with a song called “Pinball,” by the band Tandemoro. “Sippin’ my beer/playin’ pinball/yeah” goes the chorus. Listening, I had never felt happier to be approaching senior citizenship.

Come back Mumblecore, all is forgiven. 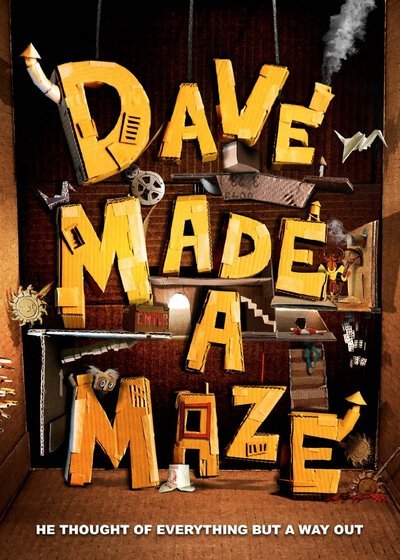