Things that raid fridges in the dark

If the sci-fi/horror hybrid "Dark Skies" had been an hour-long episode of a television anthology series like "The Twilight Zone," it might have gone down as a thoroughly average installment that handled the familiar elements in a reasonably skillful manner. In extending itself to reach a conventional feature length, however, it becomes a below-average programmer in which brief moments of interest are interrupted by long stretches of boredom. It eventually ends abruptly, as if designed specifically to enrage the hardy viewers who actually make it all the way to the end.

Keri Russell and Josh Hamilton play Lacy and Daniel Barrett, an Arizona couple with two sons and money woes — he is out of work and she is a real-estate agent charged with unloading a house so ugly that even the folks on HGTV's Curb Appeal would find it too much of a challenge. In other words, they have enough problems on their hands even before Lacy wakes up in the middle of the night and discovers that something has raided the refrigerator before disappearing into the dark.

There are other inexplicable occurrences — including more food-related weirdness and no fewer than three flocks of birds messily slamming into the house at the same time — and at first, most of them seem to be revolving around younger son Sam (Kadan Rockett), who claims that "The Sandman" is visiting him in his dreams. When the rest of the family begins to experience the inexplicable — trances, seizures, mysterious bloody noses and bruises — they become neighborhood pariahs.

Eventually, they come across eminent Internet crackpot Edwin Allard (J.K. Simmons) and he informs him that they are being tormented by aliens who are experimenting with them as a scientist might use a lab rat. According to him, "The Greys," as he calls them, have been hiding amongst us for a long time and that their recently escalating aggression suggests that they may be preparing to kidnap one of the family. Assuming that Sam is the ultimate target, the Barretts barricade themselves inside their home for a final standoff in which they attempt to fend off the invaders with shotguns and a guard dog. Perhaps not surprisingly, things do not go quite as planned.

Even viewers with only a passing knowledge of the genres that "Dark Skies" is playing with will quickly realize that it is little more than a compilation of elements taken from other and usually better films. The basic plot is pretty much a direct rip-off of the classic suburban ghost story "Poltergeist" (1982), and there are also elements obviously poached from the likes of "Invasion of the Body Snatchers" (1956 and 1978), "Signs" (2002), "Paranormal Activity" (2007) and countless other titles. Maybe at some sci-fi convention one day, fanboys can go through it shot-by-shot and call out the name of every movie from which it borrows, as a way of passing time before the "Inspector Spacetime" panel.

To be fair, "Dark Skies" does have a few things going for it. Writer-director Scott Stewart, whose previous efforts have included the inexcusably stupid genre mash-ups "Legion" and "Priest" (2011), takes a slow-burn approach to the proceedings that is effective in setting the oddball mood. As the beleaguered mother, Keri Russell delivers a strong performances that is actually far better and more committed than one might expect from this kind of movie and makes you wish that she got more chances to work on the big screen.

And even though he is only in a couple of scenes, the brief presence of the invaluable J.K. Simmons comes as a blessed relief. After all, if you have to have a scene in which all the weird goings-on are explained in one giant gob of goofy exposition, it is always wise to have it delivered by an actor with the ability to make even the silliest of developments come across as borderline plausible.

For the most part, however, "Dark Skies" is a bore that even the most forgiving genre buffs will find difficult to defend or endure. The ostensible shocks are pedestrian, the story and characters are not particularly interesting and too much screen time is dedicated to subplots that go nowhere, such as Daniel's struggle to find work and older son Jesse's (Dakota Goyo) misadventures with a weird neighborhood kid who appears to have cycled in from "Gummo" and who is by far the creepiest thing in the film.

Then there is the ending, or rather the lack of anything resembling a satisfying conclusion. Without going into too many details, it seems as if Stewart wanted to execute a Shyamalan-esque rug-pulling game-changer in the final reel. What he actually pulled off is the kind of hogwash that will leave viewers sitting in the dark, scratching their heads during the end credits in hopes that the necessary details will be spelled out at the last minute, as in the notorious wrap-up of "Wild Things." Spoiler Alert — they aren't, so feel free to flee the minute the credits begin to roll, if not long before.

In what can only be described as an act of pure perversity, "Dark Skies" opens with a quote from no less an authority than the late, great Arthur C. Clarke: "Two possibilities exist: either we are alone in the Universe or we are not. Both are equally terrifying." This is a profound notion that can set people of all stripes to contemplating their own place in the grand scheme of things. Maybe someday this quotation will get a chance to open a film that is worthy of it. 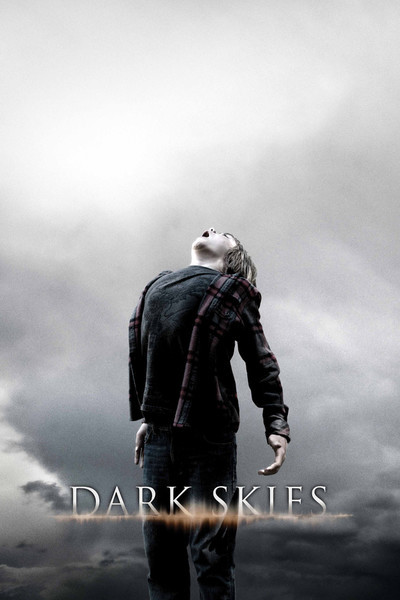