There are few things more squirm-inducing than a comedy informing you that it’s funny before you’ve gotten the chance to reach your own conclusions. I’ll never forget the embarrassing pre-movie intro shown during the theatrical run of the 2017 flop “Snatched,” in which its overqualified stars encouraged the audience to laugh, an instruction that made the silence that followed all the more conspicuous. Laura Holliday’s “Daddy Issues,” a 2018 indie finally being released online, begins with its heroine Henrietta (standup comic Kimberley Datnow) performing a rushed set about her disastrous love life that elicits peals of guffaws from her audience that are so consistent, they might as well have been canned. Then the film cuts to Henrietta showing her date the routine on YouTube, while explaining to him that he must keep watching until he laughs so that she feels validated. That made me chuckle.

“Daddy Issues” is not the laugh-out-loud rom-com it had likely aspired to be, yet it’s just charming enough to make you wish it were better. As evidenced by the dedication card and home movie footage that accompanies the end credit roll, the film appears to have been a meaningful labor of love for Datnow and her sister, Amy, who share both producing and story credits (we are informed in the opening montage that this is a “Datnow Sisters film”). Yet the screenplay wasn’t written by them—Holliday and John Cox served as it coauthors—and the dialogue reads more like a blueprint without the personality filled in. You can almost see the notation “Insert humor here” scribbled in the margins. None of the characters are developed enough to register as anything more than sketch comedy tropes fit for improv exercises rather than a feature-length film. If the film had been funnier, this wouldn’t have been as much of a problem, yet Holliday also wants to convey an important message, and that’s difficult to achieve when the world she has constructed lacks believability.

Henrietta’s need to seek the approval of the men she dates stems from the lack of acceptance she received from her father, whose funeral opens the film. This relatable conflict would’ve had more dramatic heft if the father were portrayed as a human being rather than a stuffy cartoon caricature. He materializes as a disembodied voice that sounds like a mustache-twirling stock villain no less artificial than the series of fools Henrietta chooses to date. It’s glaringly obvious from the get-go that her one decent match is Nolan (Tanner Rittenhouse), her father’s longtime employee whom she finds still living in his dead boss’ house. As per the patriarch’s dying wish, Henrietta treks from London to inherit her dad’s Los Angeles estate, while ensuring that his business remains intact. Yet her designated role on the board requires zero responsibilities, and since she has zero qualifications, the nonsensical speech she delivers—into a pencil, which she treats as a microphone—earns her the expected roundup of bewildered expressions from her father’s colleagues.

It’s a shame that the plot is so formulaic, considering the sheer unpredictability of its leading lady. Datnow has a penchant for slipping biting remarks into otherwise banal interactions and throwing off a secretary by ringing the bell on her desk for no particular reason, all without rupturing her pokerface. She deserves better lines than, “Wanna play with your balls?”, which serves as verbal foreplay to a sexually charged game of ping pong with Nolan. Rittenhouse has an effortlessly likable, easygoing screen presence evocative of Paul Rudd, yet even that can become grating as his stunted maturity tests the patience of his girlfriend, Grace (Martha Hamilton), a single mom whose exasperation is entirely warranted. Henrietta and Nolan’s eventual romantic pairing is such a foregone conclusion that it makes the long progression toward them realizing this fact all the more tedious.

Since this premise doesn’t have enough meat on its bones to pad out the 82-minute running time, the script supplies us with a series of narrative detours, the most jarring of which involves Henrietta’s best friend, Alice (Alice Carroll Johnson), who decides to take the job of a “sugar baby” in order to help her girlfriend pay the bills. This plot thread could’ve easily led to a host of comedic complications, yet her clients (including veteran character actor Peter Jason in an endearing cameo) turn out to be not at all the creeps one would expect. They simply want some pleasant companionship, and that is precisely what this film offers its viewers, if little else.

Every single person onscreen—from a bum on the street to a bridal party whom Henrietta recruits for the purposes of revenge—feels like a Second City student in a shoddy disguise, which makes me wish that Holliday had carried her film into the realm of full-on farce. There are numerous glimmers of the comic potential that could’ve made this enough fun to warrant a recommendation, especially the scenes involving Jamison (Joel Sutton), a grotesquely self-important actor who mistakenly believes that any person unlucky enough to enter his obit desires to take a selfie with him. The few sampled clips we get to see from his hokey CW series, “Mutant High,” made me want to watch a whole lot more of it.

Yet like the rest of the ensemble, Sutton’s character ultimately boils down to one eccentricity that isn’t pushed far enough for it to be truly hilarious. A key example would be that of Hunter (Francis Lloyd Corby), another of the schmucks Henrietta unwisely grants her romantic attention. His spotless apartment is indicative of his complete inability to be spontaneous when in the throes of passion, so when Henrietta slides off his jacket as they make out, he immediately worries about it getting wrinkled. This is essentially a gender-flipped variation on the uproarious moment in “Young Frankenstein” where Madeline Kahn obsessively avoids getting her makeup smudged while bidding adieu to Gene Wilder, resulting in the classic punchline of them rubbing their elbows as if shaking hands. Though the scene in “Daddy Issues” has similar promise, it ends before any comic momentum is built, further cementing the film’s status as a slacker comedy that is far too slack. 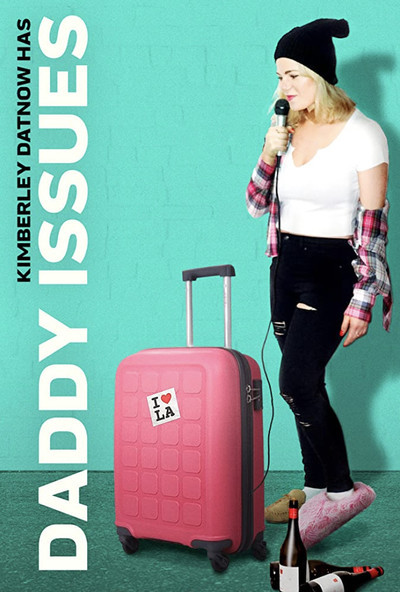