"Da Sweet Blood of Jesus" is Spike Lee's first crowdfunded feature and his second remake in a row, following "Oldboy" (a film I liked better than most critics), but as you might expect, given the defiantly idiosyncratic nature of this director, it's not content to be a rehash.

The movie follows the template of its source material, Bill Gunn's cult favorite "Ganja and Hess," pretty closely, and even evokes its sorrowful, romantic, dreamy tone as it portrays a love affair between two bloodlusting individuals; but it's connected to the real world. It works through many of Lee's familiar preoccupations (including racism, cultural assimilation, class anxiety, capitalistic exploitation and addiction) in such a blunt way that it might fit nicely on a double bill with "Jungle Fever" or "Summer of Sam." The latter were dismissed as jumbled messes by many, but had an undeniable feverish intensity, as if the writer-director were determined to work through every sociopolitical issue obsessing him at that moment; like many of his films, but even more so, they were kitchen-sink dramas, sermons, music videos and tragedies all at the same time, the individual aspects working at cross-purposes with each other, often thrillingly and sometimes to the films' detriment.

But Lee's most persistent problem, an inability to unify his messages and make them cohere, doesn't really hurt him in "Da Sweet Blood of Jesus" because the film is a hypnotically nightmarish mood piece more than anything else; it makes sense and yet doesn't make sense, in the way that dreams do and don't make sense. Ideas bleed into other ideas and morph into third, tangentially related ideas; notions are teased and then dropped; almost unbearably savage violence is perpetrated on characters who often have done nothing to deserve their fates; not once does Lee trouble himself with questions of likability, much less the possibility that he's following his own muse to the point where he's losing people. This will prove either maddening or refreshing, depending on whether your willingness to go where Lee takes you overwhelms your desire for something more conventionally neat and clearheaded.

Stage actor Stephen Tyrone Williams stars as Dr. Hess Greene, a noted anthropologist studying the ancient Ashanti Empire. In the opening scene, he comes into possession of an ancient dagger that triggers a complete change in his world, which is centered around a handsome Martha's Vineyard estate that measures exactly (ahem) 40 acres. The story, such as it is, kicks into gear when his depressed research assistant, Dr. Hightower (Elvis Nolasco), attempts suicide, then grapples murderously with Hess in a close-quarters struggle involving the dagger. Without giving too much away, let's say that this struggle ends with Hess transformed into a nightcrawling loner with a thirst for human blood.

The term "bloodsuckers" has all sorts of political and metaphorical meanings, and many a vampire movie has playfully toyed with them. "Ganja and Hess," a film that emerged less than a decade into the era of black power politics, was one of the more notable examples, and Lee, rewriting Gunn's original script, attempts something similar here. In the run-up to the movie's production, the filmmaker kept insisting that "Jesus" was not, strictly speaking, a vampire movie, and while that assertion seems a bit coy (vampires are pretty obviously what we're dealing with) it isn't inaccurate. Hess and many of the other African-American and afro-Caribbean characters are presented as living somewhere in between, or beyond, two familiar movie worlds, the Black inner city and the tony coastal enclaves of wealthy Whites. White "bloodsuckers" are glimpsed at Gatsby-like parties on Hess's estate, and talk of how the engines of capitalism grind up the powerless indicts America itself as a kind of vampire empire.

But "Jesus" moves beyond that to show Hess as a literal and figurative bloodsucker himself, stealing precious bags of red from blood banks, preying on desperate and too-trusting people of color (including a young single mother) to satisfy his unquenchable thirst, and being enabled and in some cases egged on by his new lover Ganja (British actress Zaraah Abraham, camping up the exotic bitchery and exuding poise and menace) and his Renfield-like assistant Seneschal (Rami Malek).

And, as in "Jungle Fever," "Summer of Sam," "Mo' Better Blues" and so many other Spike Lee joints, there's a fascination with addiction, and how it overwhelms empathy and dignity. Without putting too fine a point on it, "Jesus" presents all sorts of traditions and institutions as engines of exploitation as well. The U.S. economy, the worship of guns and machismo, and the desire of minorities to get ahead by any means necessary are all seen as manifestations of addiction, or vampirism. It's all one enormous, multi-tentacled argument, and as you've gathered, Lee has trouble controlling it; but again, the horror genre is one of the only genres where it's OK, or at least acceptable, to be imprecise, because it's more often about sustaining a feeling or a mood than making a case.

The most impressive thing about "Jesus" is its unfailing control of tone. This is manifested in Lee's immaculate and uncharacteristically clean, even sterile, widescreen compositions (shot by Daniel Patterson); Barry Alexander Brown's scalpel-exact edits; and the score, which switches between rap/R&B and Bruce Hornsby's introspective solo piano riffs, but always keeps the volume high. Even the more stilted conversations feel less like freestanding lines than lyrics in a two-hour visual and musical tapestry.

This is clearly intentional: although Lee hasn't done a straight-up musical since "School Daze," his movies often tilt in that direction. This one dives into it headfirst—starting with the dazzling opening credits sequence, which sees dancer Charles "Li'L Buck" Riley gliding, twisting, spiraling and twirling across an array of Red Hook, Brooklyn locations—and keeps it going through a gospel performance late in the movie in which Black American Christianity gets pulled into the film's matrix of addiction and transcendence.

It's impossible to say what, exactly, Lee had in mind when he undertook this project, but whether you like the result or not, you damn sure know you've seen something not quite like anything else (including its inspiration), made with a sense of passionate engagement. 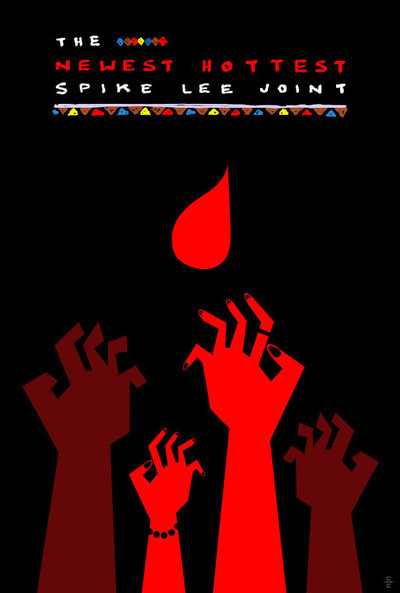