Despite sounding like a Latin martial-arts movie, "Cuban Fury" does not star the Jackie Chan of Havana. Instead, it’s an eager-to-please British underdog comedy about a former swivel-hipped teen salsa sensation who stages a middle-age comeback to impress the woman he loves.

You probably know the steps to this routine already, from the unlikely tubby hero (human cuddly toy Nick Frost, faring nicely in his debut as a romantic lead) to his taunting workplace rival (Chris O’Dowd, a veritable spire of smarm) to his tough-love mentor (Ian McShane, foul-mouthed and lizard-lidded as usual) to the will-he-or-won’t- he-compete contest finale. There is a little dirty dancing, some Saturday night fever and a few strictly ballroom encounters. No full monty, alas, although a pantless O’Dowd does generously show off his saggy green undies while scratching his behind.

To those who guessed there might also be a makeover sequence and a training montage, all I can say is, well done.

But there are at least three good reasons why anyone would want to see this by-the-numbers lark. First of all, I don’t know about you, but anything done with an English accent usually seems all the more tolerable for it. Documentary narration, cursing, someone reading the litany of side effects in a Cialis commercial. Think of how you different you would have felt about "The King’s Speech" if the monarch stuttered in Brooklynese or with a Texas twang. Of course, in that case, he probably wouldn’t be ruling England.

Second is the cast, which manages to twirl around most of the more ignominious failings of a script that clearly could have used a rewrite or two—especially considering how flimsy the female roles are—while convincing the audience that that are having a blast together.

Third, it is just plain fun to observe Frost as Bruce while he happily shimmies and shakes his way to regaining his once-renown "feet of flames." The dancing sequences are clumsily shot and edited with body doubles that are only slightly less obvious than those in "Flashdance," but the actor’s dedication to coming close to being believable is to be applauded.

After an intro that explains Bruce’s mounting fame as a youth and his bullying-related change of heart about his salsa-king pursuits, we meet him 25 years later as a geeky industrial engineer who has never had much luck with the ladies. His idea of a big evening? Dining on a four-pack of yogurt at the kitchen table. When their new attractive American boss, Julia, arrives at the office (in the fetching form of Rashida Jones), both he and O’Dowd’s lascivious Drew take note.

After finding out that she is a salsa aficionado herself, Bruce decides to get back in the game and seeks McShane’s Ron to help him regain his dance-floor mojo. Drew, meanwhile, relies on more deceptive means of impressing Julia, including purloining a mix tape of salsa tunes that Bruce customized for her and passing it off as his handiwork.

Let’s stop right here and ask: When was the last time you saw a movie with a contemporary setting that used a mix tape as a plot point? No wonder Drew mockingly says to Bruce when he shows him his handiwork, "Are you (bleep)-ing John Cusack now?" (For the Cusack-impaired, that's a reference to "High Fidelity"). But somehow, instead of being weird, it just makes Bruce even more quaintly endearing.

Frost also scores points for allowing a supporting player to steal his joke-cracking thunder. In the grand tradition of such exotically accented gay scene-stealers as Hank Azaria’s housekeeper Agador Spartacus from "The Birdcage" and Bronson Pinchot’s art gallery clerk Serge from "Beverly Hills Cop" comes Bejan, an enthusiastic Middle-Eastern salsa student brought to life with rambunctious relish by Kayvan Novak. His amusingly innocent enthusiasm for everything from orange Fanta (his answer to Gatorade, which he drinks still, not sparkling) to shaved male chests keeps him from tipping into troublesome stereotype territory.

The high point should be Bruce’s climatic return to form, which also should have been better staged to build excitement. Director James Griffiths’ roots are in TV, including "Episodes" with Matt LeBlanc, and it shows sometimes. But the segment that affords the most laughs is a salsa-off showdown in a high-rise parking garage between Frost and O’Dowd that delivers more comic sizzle than any of the other dance couplings.

Besides, the moment is topped off by the briefest of drive-by cameos by Simon Pegg, Frost’s usual partner in tomfoolery in such films as "Shaun of the Dead" and "Hot Fuzz." I think I detected a bit of the green-eyed monster flashing in Pegg’s eyes as he whizzed by. 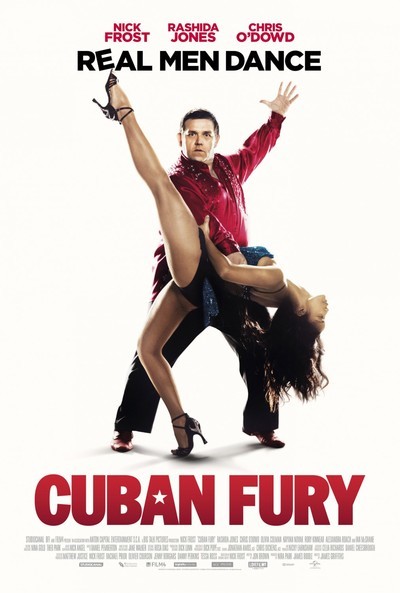