People who have been damaged by life can make the most amazing adjustments in order to survive and find peace. Sometimes it is a toss-up whether to call them mad, or courageous. Consider the case of R. Crumb. He was the most famous comics artist of the 1960s, whose images like "Keep on Truckin' " and "Fritz the Cat" and his cover for the '60s album "Cheap Thrills" helped to fix the visual look of the decade. He was also a person hanging onto sanity by his fingernails, and it is apparently true that his art saved his life.

"Crumb," which is one of the most remarkable and haunting documentaries ever made, tells the story of Robert Crumb, his brothers Max and Charles, and an American childhood that looks normal in old family photographs but conceals deep wounds and secrets. It is the kind of film that you watch in disbelief, as layer after layer is peeled away, and you begin to understand the strategies that have kept Crumb alive and made him successful while one of his brothers became a recluse in an upstairs bedroom and the other passes his time literally sitting on a bed of nails.

Movies like this do not usually get made because the people who have lives like this usually are not willing to reveal them. "Crumb" was directed by Terry Zwigoff, who had two advantages: He had known Crumb well for years, and Zwigoff was himself so unhappy and suicidal during the making of the film that in a sense Crumb let him do it as a favor.

Of Crumb's importance and reputation, there is not much doubt.

His original illustrations and the first editions of his 1960s and 1970s underground comic books command high prices. His new work is shown in galleries and is in important collections. No less an authority than Robert Hughes, the art critic of Time magazine, appears in "Crumb" to declare him "the Brueghel of the last half of the 20th century." But "Crumb" is not really about the art, although it will cause you to look at his familiar images with a new eye. It is about the artist, who grew up in a dysfunctional family led by a father who was an overbearing tyrant - a depressive, sadistic bully who, according to this film, beat his sons and lost few opportunities to demean them. (There were also two sisters, who declined to participate in the film.) All three brothers retreated into fantasies in an attempt to cope with their home life. It was Charles, the oldest, who first started to draw comic strips, and then Robert began to copy him. The brothers seem to have had strong fantasy relationships with comic characters; Charles began to pretend he was Long John Silver. And while it is one thing to learn that Robert masturbated while looking at comics, especially his own, it is another to learn that his prime erotic fixation was with Bugs Bunny.

Many of the people in Crumb's life talk with great frankness about him, including his brothers, his mother, his first wife, Dana (who says he began to develop a "new vision" in 1966 after experimenting with drugs), and his present wife, Aline Kominsky, who recounts bizarre details of his lifestyle with acceptance and understanding. We learn most, however, from Robert himself.

He was intensely unhappy in high school, nursed deep grudges against his contemporaries and uses high school enemies as the models for many of the unattractive caricatures in his work.

It is surprising to learn how closely autobiographical some of his drawings are; in his comics, men are fixated by callipygian women and dream of riding them piggyback, and then we see Robert doing the same thing at a gallery opening. He pages through the faces in a high school yearbook, and then we see their look-alikes in his cartoons.

If Robert was unhappy in high school, Charles found it an ordeal from which he never really recovered. In a visit to the family home, occupied by Charles and his mother, we visit the upstairs room that he rarely left, and with Robert essentially acting as the interviewer, he remembers, "I was good-looking, but there was something wrong with my personality; I was the most unpopular kid in school." On a visit to Max, the youngest brother, we find him living as a monk, drawing a long linen tape through his body to clean his intestines, and showing recent oil paintings of considerable skill (he still has his mail-order test from the Famous Artists School).

Mrs. Crumb, interviewed while sprawled on a sofa and worrying darkly about the window shades, seems complacent about the fact that Charles never leaves the house: "At least he's not out taking illegal drugs or making some woman miserable." Zwigoff shows us details of many Crumb comic strips that are intensely violent, sadistic and hateful toward women. And he interviews such voices of sanity as Deirdre English, former editor of Mother Jones magazine, who finds his work pornographic - "an arrested juvenile vision." So it is, and her voice expresses not puritanism, but concern and simple observation. Yet as I left the film, I felt that if anyone had earned the right to express his own vision, it was Crumb, since his art is so clearly a coping mechanism that has allowed him to survive, and deal with his pain. "Crumb" is a film that gives new meaning to the notion of art as therapy. 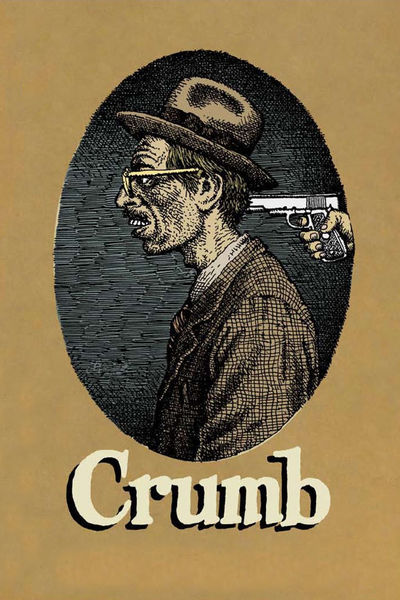 Rated R For Graphic Sex-Related Cartoons and For Language