As a techie, I expected more from "Creative Control." The concept of people living in a “near-future Brooklyn” gave me serious pause, to be sure, but I thought those fears would be soothed by the sci-fi promise of technology gone awry. The gadget in question is a Google Glass-like pair of specs that allow you to surf the internet, text and answer your e-mails. If you’re ambitious, they also allow an alternate reality to play out for the wearer. Movies like this allow us to indulge in flights of fancy: What would you do if you procured a pair of these bad boys? I’d love to fly. Or make myself a billionaire. Or see out of my blind left eye again. None of these things will ever occur in reality, which is why I’d get good use out of the Augmenta Glasses seen in “Creative Control."

But, as is custom with these types of movies, anything fantastic is bypassed for the sole purpose of something sexual. And not even freaky sexual, like shape-shifting while gettin’ bizzy or orgasms that make your hair stand up like Don King’s before Roman candles shoot out of your toes. Just plain, vanilla sex that you can get any day of the week without technology, if you have game. Someone in “Creative Control” does have the kind of mind-blowing sex finish I described above, where I believe she saw angels doing the Electric Slide or something, but she used yoga to obtain her boffo finale. Last I checked, yoga was pretty damn analog.

So the technology of “Creative Control” is a bust, which leaves me with the characters and their situations. None of these are original nor entertaining unless you’re the type of person depicted in this movie. I am not, and my real-life aversion to this type of Brooklynite is why I found “Creative Control” insufferable. I wonder if these folks, who ramble and whine about capitalism, third-world issues and first-world problems while growing large beards, man-buns and yoga bodies would even go see a movie like this one. I’m assuming they must, because we get one of these movies practically every other week.

Director Benjamin Dickerson plays David, friend of pervy, serial cheater photographer Wim (Dan Gill) and lover of Juliette (Nora Zehetner), recipient of the aforementioned super-lucky yoga hosing. David is the lead on the advertising campaign for Augmenta, so he recruits Reggie Watts (as himself) to use them to create performance art for the advertisements. Watts’ role is somewhat thankless—he comes off as the Magical Negro that occasionally haunts the fringes of these movies—but he does get a call-back of sorts to the Grace Jones character in the far superior Eddie Murphy vehicle, "Boomerang." Like Eddie in that film, David gruesomely learns the hazards of working with avant-garde brown people.

David also starts using Augmenta to craft a purely sexual virtual reality relationship with Wim’s girlfriend, Sophie (Alexia Rasmussen). The real Sophie is somewhat available, so this seems like going about things the hard way. I get that “Creative Control” wants to make a statement about how this voluntary detachment from reality causes David—and society at large—to suffer both socially and mentally. But David’s a drunk and a drug addict before he even dons the magic shades, so he was already headed in this direction. Dickerson’s visual FX team gets some interesting mileage from the Augmenta visualizations, whose colors remain in stark contrast to the superb black and white cinematography by Adam Newport-Berra. He and Dickerson use the frame in interesting ways, even if what we’re watching is an interminable, somewhat offensive argument about African kids getting butchered while mining the material used to make David’s product.

Your tolerance for “Creative Control” will depend on your feelings toward these unlikable characters and the day-to-day things that irk them. For example, Wim is particularly vile but not at all unrecognizable as a typical masculine movie type. He sends pictures of himself having sex with his various models to best friend, David, and their male view of women harkens back to the Stone Age. The female characters don’t fare too much better, but they are granted more agency than you might suspect.

The final scene of “Creative Control” introduces an idea I wish the film had explored, the notion of how living in a big city can be poisonous, but those toxins can prove too tempting to resist. The ambiguous last shot, which visually brings this idea to the forefront, deserves a better movie attached to it, one that earned the full devastation of these implications. If nothing else, I would have been happier with a film that did something unexpected with its technology. Gorgeous cinematography aside, this was a tough slog. 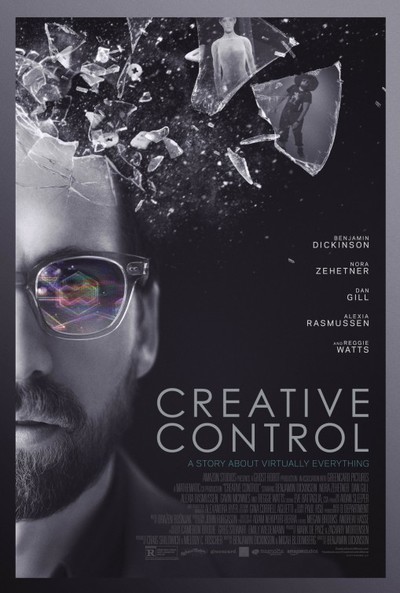