"Movies are like a machine that generates empathy,” once said this site’s namesake in a profoundly deep reflection. How right he was that film as an artform has that power, enabling the viewer to see the world from the eyes of another. In Andrea Arnold’s immersive non-fiction outing “Cow,” the filmmaker’s first foray into the documentary realm, those eyes belong to a soulful dairy cow, a wondrous specimen whose plight and rights aren’t usually as top of mind as that of nature’s endangered species. Sure, we may try to reach for “organic” and “humanely raised” in supermarket aisles as much as certain conveniences and our respective budgets allow. But we still consume these creatures’ meat and drink their milk without, if we’re being honest, considering the details of their bovine world beyond the basics.

“Cow” breaks that unconscious barrier, thanks to a filmmaker who has always proved she has a documentarian’s attentive eye through piercing coming-of-age dramas like “Fish Tank” and sprawling, free-spirited road epics like “American Honey,” attuned to both the minor thrills and major pains of the everyday. Alongside her observant cinematographer Magda Kowalczyk, Arnold applies that same alert and non-didactic spirit to “Cow” as she follows Luma, a dairy cow who provides a great service to humankind by selflessly giving her milk away. Of course, the choice is not up to her—while on the surface she is justly cared for, Luma in fact lives her days in a claustrophobic loop of miserable and invasive routines within a system designed to take all that it can from her, without giving anything back.

While she is put through the wringer day in and out, we are never able to make out what the humans mutter on about when they are around Luma. Instead, we gradually start hearing the nuances between all the different Moos that Luma lets out. Perhaps a part of that detection is human projection. But then again, there is little doubt about the animal’s distress when she gazes towards the camera in one of the most cutting moments of the film and registers her protest with a number of sparsely voiced moos that grow in their desperation and frustration.

That is not to say Arnold is on a mission here to humanize Luma or the other cows around her—thankfully, the filmmaker knows better than reaching for a Disney-esque depiction of these animals, even though she injects the film with doses of humor from time to time, mostly through some idiosyncratic musical choices. Overall, her style and ambitions are much closer to Viktor Kossakovsky’s “Gunda,” a haunting, black-and-white documentary that trails a mother pig’s challenging life, as well as “Leviathan,” Verena Paravel and Lucien Castaing-Taylor’s meditative plunge into the lives of commercial fishermen and the underwater they mine. But while these two titles remain more on the experimental side that keeps the audience (as well as some of the more reachable emotions) on the outside, “Cow,” in comparison, takes a more accessible route, despite feeling on the overlong side. By the end of Arnold’s lyrical passion project, one feels genuinely connected to Luma and her likes, deeply concerned about their wellbeing amid the grueling circumstances they are obligated to dwell in.

Aside from intervals that consist of open fields, free roaming, and sometimes, mating, those conditions are often heartrending to witness in an unattractive space that sees cows merely as figures of a supply chain, yanking their milk out with unpleasant machinery, tending to their trotters via painful-looking procedures, tattooing and even drilling through their skin for who knows what purpose. Arnold introduces this idea that cows are robbed out of their dignities right from the start: Luma gives birth to a calf, only to barely have enough time to lick the infant’s goo away, before the little one gets separated from the veteran mother and Luma’s milk gets preserved for mankind. Later on in the film, we watch Luma in labor again and the heartbreaking effect this narrative repetition generates is quite indescribable: is Luma shutdown emotionally? Is she detached from reality that is too painful to consider? Is she just quietly waiting for her days to end? Arnold isn’t interested in providing an answer. But the one you will reach on your own might just make a strong case for veganism.

While expected, the ending of “Cow” is too upsetting to see and consider, even though Arnold makes some use of the angelically divine light that shines upon the bleak scenery. It’s one that will linger on your conscience during your next visit to your local chain’s dairy aisle. 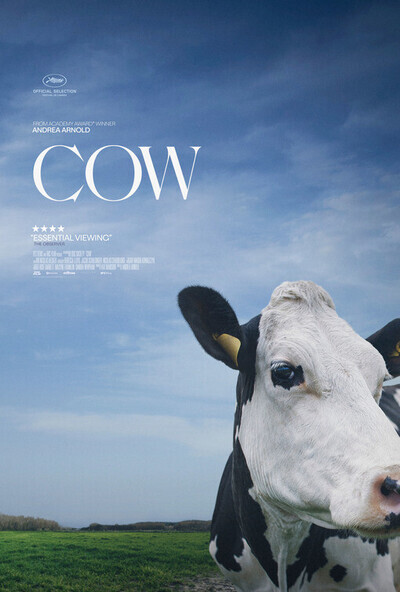