The plot of “Cop Car” seems purposely designed to raise skeptical eyebrows: Two 10-year old boys steal the cop car of a corrupt sheriff played by Kevin Bacon. Even I, devoted fanboy to all manner of bizarre genre conventions, walked in thinking this movie could not believably sustain its premise. But the viewer is being set up. The plot description is a good old-fashioned okey-doke, a distraction that lulls you with its absurdity so you’ll be blindsided by the lean, suspenseful and effective movie director Jon Watts delivers.

“Cop Car” belongs to the same subgenre as the equally enjoyable Finnish action movie “Big Game.” In both films, a boy must prove himself by doing things an adult action star would have done had he been cast in the role instead. There’s some kind of revisionist nostalgia being perpetrated here; the action films of the 80’s are being remade with protagonists the same age the filmmakers were when they discovered those films. Their youthful fantasies of self-substitution are now being writ large on the big screen, executed with a compulsive commitment best appreciated by those who also once entertained similar cinematic daydreams. Stealing a cop car might be pushing things a bit, but driving said police vehicle 100 miles per hour down a two-lane country highway fits comfortably in the realm of most childhood imaginations.

What’s most striking about “Cop Car” is its sparseness. There are no extraneous characters nor situations, and we’re not given much information outside of that which drives the story. Watts establishes these intentions in the opening scene, a beautifully shot trek taken by our prepubescent protagonists. As they walk through the wide open spaces that fill the screen, Travis (James Freedson-Jackson) gives Harrison (Hays Wellford) a primer on profanity. For several minutes, we simply hear the call and response cadences of their cursing. Harrison, who is clearly the follower in this friendship, balks at repeating the f-word, citing the same excuse Mr. Mackey sang in “South Park: Bigger, Longer and Uncut.” “That’s the worst word you can say,” Harrison says before being goaded into an unconvincing utterance. Of course, he’ll be called upon to say it with conviction and impunity much later.

“Cop Car” is the story about how Harrison The Follower comes into his own manly heroism. The fact that he’s 10 feels like a subversive statement on the underlying childishness of action-movie machismo. We root for both of these sometimes infuriatingly naïve kids who ran away from home and are now in way over their heads, but it’s Harrison who literally drives the film to its rousing yet mildly ambiguous conclusion. In fact, we are Harrison, and nowhere is this more evident than in a virtuoso monologue scene delivered directly to the camera by an actor I will not reveal. Watts keeps his camera in close-up on the actor as he threatens Harrison (and us) with terrifying, detailed descriptions of graphic violence.

Screenwriters Watts and Christoper D. Ford threaten the mood by making the kids the butt of some cheap gun-related humor (one scene, where Harrison wears an ill-fitting bulletproof vest while Travis aims at him with a gun, is the film’s most cringe-inducing misstep). For the most part, however, they maintain a tight grip on the story, twisting it in ways we don’t see coming. They are aided and abetted by producer Bacon, who fully inhabits his murderous sheriff. Bacon never overplays the role, even after he’s required to go full psycho. His Sheriff Kretzer is smarter than his original mistake of leaving the keys in his cop car would indicate, and the way he handles the situation answers many of the questions that arise as we follow the plot. Perhaps the screenwriters’ most clever touch is placing us into a flashback without us knowing we’re there. The payoff is hilarious and gasp-inducing.

In addition to Bacon, Camryn Manheim shows up to represent the adult world in what at first seems like a thankless, obnoxious role. She eventually proves useful in a scene of pitch black cosmic violence taken straight from the Coen Brothers playbook. This isn’t an overly violent film, but the few scenes of carnage and threat carry a lot of weight without being exploitative.

“Cop Car” blatantly shouts out its influences, from the 80’s action plot to the shots of the empty highways reminiscent of 70’s cinema. The kids could have been transplants from the Amblin Entertainment universe, though they are far more mischievous (and more potty-mouthed) than Spielberg’s company would have allowed. And Bacon’s sinister cop has elements of everything from shady, corrupted noir figures to the casual, folksy friendliness of Andy Griffith’s Sheriff Taylor of Mayberry.

Running a crisp 86 minutes, “Cop Car” gets in and out long before you have a chance to raise any objections. Instead, you'll walk out fully entertained, shaking your head in admiration at how the filmmakers pulled this off. This is one of the better genre offerings of 2015. 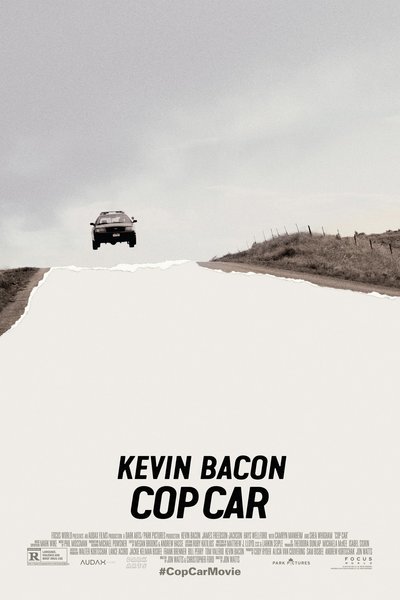 Rated R for language, violence and brief drug use