Here is a movie that is supposed to be about a newspaperman--a columnist for the Chicago Sun-Times, in fact--who is like no newspaperman I know, but exactly like every newspaperman would like to be. In my opinion, that makes it accurate. "Continental Divide" stars John Belushi as the journalist, obviously inspired by Mike Royko. He likes to walk along the lakeshore with the towers of the city outlined behind him against the lonely sky at dusk, a notebook stuck in his pocket and a cigarette stuck in his mug, on his way to rendezvous with stoolie aldermen and beautiful women.

The movie takes this character, played by Belushi with a surprising tenderness and charm, and engages him in an absolute minimum of newspaper work before spiriting him off to the Rocky Mountains for what the movie is really about, a romance with an eagle expert. The movie opens as if it's going to be a tough Chicago slice-of-life, with Belushi getting tips from an insider about city graft and payola, but then the columnist is beaten up by a couple of cops on an alderman's payroll. The managing editor suggests this might be a good time for Belushi to spend a few weeks out of town, and so the columnist heads for the Rockies to get an interview with a mysterious and beautiful woman (Blair Brown) who has generated worldwide curiosity by becoming a hermit to spy on the habits of bald eagles.

The whole center section of the movie takes place in the mountains, and if nothing very original happens there, we are at least reminded of several beloved movie cliches that seemed, until this film, to belong exclusively in the comedies that Katharine Hepburn and Spencer Tracy used to make together. After the city slicker Belushi crawls wearily up a mountainside (losing his booze and cigarette supply in the process), he meets the beautiful birdwatcher and falls instantly in love. She's having none of it. She's one of those independent women who marches from crag to aerie in her L.L. Bean boots and designer wardrobe.

Because Belushi's grizzled mountain guide already has disappeared down the mountain, the two of them are destined to spend the next two weeks together in a cabin. This sets up a classic situation in which the girl talks tough but starts to fall for the big lunkhead. And there are the obligatory switches on male-female roles as Brown climbs mountains and Belushi stays home and makes goulash. Occasionally, a mountain lion attacks.

This all sounds predictable, of course, and yet this movie's predictability is one of its charms. It's rare these days to find a film that is basically content to be about a colorful man and an eccentric woman who are opposites and yet fall madly in love. It is even rarer to find a movie cast with performers who are offbeat and appealing and do not have obvious matinee-idol appeal. Belushi's character in this movie is quite unlike his self-destructive slob in "National Lampoon's Animal House" it shows the gentleness and vulnerability that made him so appealing in some of Second City's quieter skits.

Brown is also a revelation. She has been in several other movies without attracting a great deal of attention, but here she is unmistakably and wonderfully a star, a tousled-haired, big-eyed warm person who does not project sex appeal so much as warmth and humor. In other words, she has terrific sex appeal.

One of Belushi's special qualities was always an underlying innocence. Maybe he created his Blues Brothers persona in reaction to it. He's an innocent in this movie, an idealist who's a little kid at heart and who wins the love of Brown not by seducing her but by appealing to her protective qualities. That's the secret of the character's appeal. We're cheering for the romance because Belushi makes us protective, too, and we want him to have a woman who'd be good for him.

What about the movie's view of journalism? It's really just a romanticized backdrop, “The Front Page” crossed with "Lou Grant" and modernized with a computerized newsroom. The newspaper scenes in the movie were shot on location in the Sun-Times features department, and one of the quietly amusing things about "Continental Divide's" view of newspaper life is that in the movie it's more sedate and disciplined than the real thing. In the "real" Sun-Times features department, there's a lot of informality and chaos and good-natured confusion and people shouting at one another and eating lunch at their desks. In the movie, the extras (recruited from the Sun-Times staff) forget about real life and sit dutifully at their video display terminals, grinding out the news.

The newspaper's managing editor is played by Allen Goorwitz, a gifted character actor who usually plays manic overcompensators, but who this time is reasonable, calm, civilized, compassionate, and understanding, just like my boss. The movie's city of Chicago is populated by colorful old newsstand operators, muggers who apologize before taking your watch, and city council bosses who make sure their shady deals don't get into the official transcript. The newsies and muggers are fiction. The movie itself is fun: goofy, softhearted, fussy, sometimes funny, and with the sort of happy ending that columnists like to find for their stories and hardly ever find themselves. 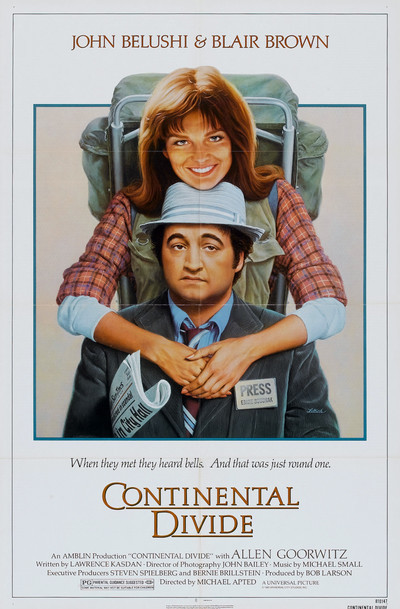