"Congo" is a splendid example of a genre no longer much in fashion, the jungle adventure story. Perhaps aware that its material was already dated when Stewart Granger made "King Solomon's Mines" in 1950, the filmmakers have cheerfully turned it into an action comedy, and the actors have gone a step further, treating it like one of those movies like "Beat the Devil" that is a put-on of itself. The result is not a movie that is very good, exactly, but it's entertaining and funny. False sophisticates will scorn it. Real sophisticates will relish it.

The movie begins with a ludicrous set-up featuring Joe Don Baker, chewing the scenery (and I believe even the foundations of the sound stage) as a megalomaniac tycoon who needs a rare African diamond to build a laser system that will "dominate the communications industry!" His son Charlie seems to have discovered the diamond lode before his satellite transmission is knocked off the air by what look like killer gorillas.

Baker persuades an assistant, Karen (Laura Linney), to go into the jungle to find out what happened to Charlie, and to bring back the diamonds. The diamonds seem more important than his son. She accused him of not being human. "I'll be human later!" he barks.

For very complicated reasons, Karen merges her mission with an expedition being mounted by a "primologist" (Dylan Walsh), who has taught an ape to communicate by using American Sign Language to activate a speech synthesizer. Also along for the ride is a shadowy, sinister figure named Herkermer Homolka (Tim Curry), who introduces himself as a "Rumanian philanthropist," but has in fact staged a lifelong quest for the jewels of the lost city of Zinge. He has the Peter Lorre role.

Are you following this? I realize only a very particular kind of filmgoer is likely to relate to this movie: one raised on Saturday matinees, with a good sense of the absurd and an appreciation for movie clichés. Curry's first appearance gets a laugh, for example, even before he says anything, because he glowers so pregnantly. And an ideal audience will also enjoy the scene where Charlie looks over his shoulder, sees something, and screams before the screen turns black. And the scene where Karen kicks open the door of a DC-3 and shoots down anti-aircraft fire with a flare gun. And lines like "Why are they putting on parachutes?" And, in the middle of the jungle, the classic, ominous line, "Two of our porters have run away." And the shot of the hand of a corpse clutching a big diamond.

The key actor in the African sequences is Ernie Hudson, as Monroe Kelly, the local guide, who described himself as "a great white hunter who happens to be black." In a droll performance that is perfectly suited to the material, Hudson resembles Clark Gable and, yes, Stewart Granger in his ability to maintain a sardonic detachment and calm courage while (a) being attacked by killer apes while (b) the ground opens up under him during a volcanic earthquake, and (c) rivers of molten lava head in his direction.

Many of the other best moments belong to Amy the gorilla, created by effects makeup artist Stan Winston, who enjoys a martini on the plane ("She's allowed one; it will calm her down") and later amazes the African gorillas by informing them, in synthesized speech, that her name is Amy and they are ugly.

The closing action sequences, involving the lost city of Zinge, the volcanic eruption and the attack of the killer apes, is in the tradition of the Indiana Jones movies, although the traffic direction isn't as good and a lot more porters disappear without being accounted for. The movie was directed by Frank Marshall, who has worked with Steven Spielberg on his action extravaganzas, and is based on a novel by Michael Crichton, who is said to be unhappy about what they've done with his book. Since it is impossible to imagine this material being played for anything but laughs, maybe he should be grateful. 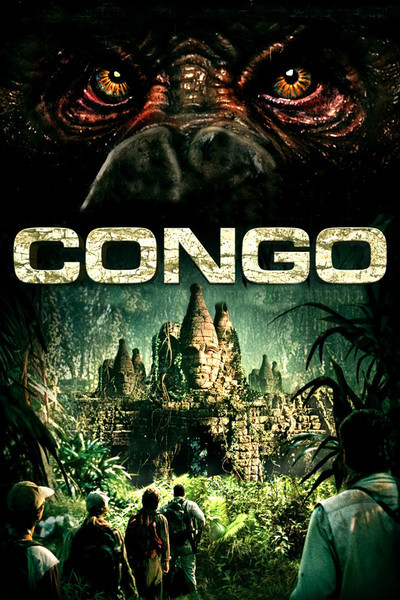