If you know your history, the concept of a Black cowboy will not seem foreign. They’re part of a rich American story that spans centuries and seldom goes explored in cinema or in reality. Netflix’s “Concrete Cowboy” explores a more recent iteration of this culture, the Black “urban cowboys” who have populated North Philadelphia for the past 100 years. While I admit I would have preferred a documentary about the people who have passed this tradition down from generation to generation, director Ricky Staub’s fictional feature serves as a worthwhile introduction. Like “Nomadland,” this film features real-life members of the community playing themselves alongside big name actors like Idris Elba, Jharrel Jerome, and the always welcome Lorraine Toussaint.

Elba plays Harp, one of the leaders of the Fletcher Street Stables community. He works the stables, helps out wayward youth in the community, and tends to the horses, one of which he keeps in his house. Harp has a son, Cole (Caleb McLaughlin), who lives in Detroit. As the film opens, Cole’s discipline problems at school and at home have become too much for his mother. Without telling her son, she decides to drop him off in Philadelphia to spend the summer with Harp. Cole protests with all his might, but this is such a done deal that his Mom drives off in mid-protest, leaving him on the street in front of Harp’s place.

Cole has a history in Philly, even if very little of it includes his father. But Harp’s neighbors remember him, starting with Nessie (Toussaint), a stern but loving community member. She gets the devastated Cole’s attention and sends him around the corner to find his Dad. Harp is sitting around a more suitable campfire for a city—a flaming trash can—swapping stories with his band of brothers and sisters. At one point, a cop played by Method Man shows up, not to break up the party but to caution them about the condition of the stables.

All of this is beyond bizarre for Cole; in addition to the chip on his shoulder about being forced to spend time with a man he hardly knows, the living arrangements leave much to be desired. Not only does he have to deal with empty cupboards and a fridge full of only sodas and beer, there’s the aforementioned equine roommate who takes up most of the space reserved for houseguests. Harp devotes more time and money to feeding his horses than himself, so Cole will have to eat out a lot.

Philly does offer one respite: the belated reunion between Cole and his older cousin, Smush (Jerome). Smush takes him to familiar locales, smokes weed with him and talks a whole spades game worth of smack. He also explains that when a dude’s Ma sends him to spend the summer with his Pops, it’s an irreversible scenario. Straub and his co-writer, Dan Walser, use Jerome’s character to differentiate between the paths a young man like Cole might take, leaning on an all too familiar drug plotline and outcome. Yet they also surprise us by crafting an often tender portrait of a man who once stood at the same crossroads our protagonist will stand. Jerome, as usual, delivers an excellent, nuanced and complex performance. He’s so good at generating empathy that when brutality befalls him, the film can barely stand to show it to us.

Harp considers Smush a bad influence, so to keep his nocturnal jaunts with his cousin secret, Cole starts working at the stables. “Hard things come before good things,” Nessie tells him, echoing what could be a theme of “Concrete Cowboy.” One of those hard things is shoveling manure, of which there is an endless supply. In these scenes we meet Paris (Jamil Prattis), who serves as his tough supervisor and Esha (Ivannah Mercedes), an impressive rider/trainer who has a flirty rapport with Cole. Both are played by real-life members of the Fletcher Street Stables community, adding notes of realism to their fictional roles. Prattis is as memorable as the actors who surround him.

Westerns are all about larger-than-life figures with the potential for legendary status. Their morals are often defined by clear-cut notions of good and evil. The best ones blur that binary delineation, and while “Concrete Cowboy” isn’t exactly a Western, it’s comfortable cribbing some of the contents of the genre. There’s a gorgeous sunrise, a powerful scene of horse-taming, and the spectacle of seeing Idris Elba on a horse. Though the role requires Elba to present a more human form than usual, complete with pot belly, he’s still got enough star power to cast a striking figure while in the saddle. For sustenance, he’s given two excellent dramatic scenes with McLaughlin, including a stunning monologue about how Cole got his name.

“Concrete Cowboy” merges its two storylines together with minimal difficulty by using the city of Philadelphia as the constant between the two. It’s never jarring to see someone riding a horse in an urban setting, because as one character points out, horses have always been in the city. Holding on to a particular way of life, despite intrusive outside forces attempting to destroy it, is also part of a city’s cultural landscape. The juxtaposition of the cowboys’ current day and their historic past is alluded to in a wonderful moment near the end where the Fletcher Street crew go for a majestic ride down the street. A young Black boy in a car observes them with the awe John Ford afforded majestic rides in his films. You can feel the sense of pride and joy in this moment, and know with some certainty that this is why the filmmakers chose to tell this story. 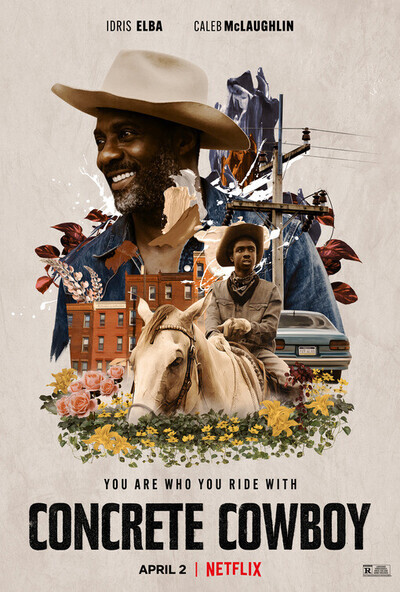 Rated R for language throughout, drug use and some violence.