Coming Home in the Dark

"Coming Home in the Dark" initially feels like another entry in that subcategory of horror films where soft pampered city folk go out into the country to be terrorized by locals. But while it cleaves to that template for a little while, this debut feature from New Zealand filmmaker James Ashcroft soon reveals another story layer that complicates our sympathies. Throughout, the savage intensity of the central predicament keeps tightening the thumbscrews on the audience, raising questions of how far a film can go to make viewers anxious and fearful before it starts to feel like abuse posing as something more rarified.

The story starts with a slow tracking shot across a desolate highway, revealing a car abandoned by the side of the road, personal effects scattered about, driver's side door cracked open. It's a stunning opening shot, and there are plenty more moments like it: beautiful, ominous, unsettling, using the landscape in a way that's simultaneously menacing/desolate and possessed of otherworldly beauty. Ashcroft—who co-wrote the script with Eli Kent, from a short story by Owen Marshall—has that David Cronenberg gift for icy precision and tonal control, where the filmmaking fills the viewer with dread before the credits have even finished. Something horrible is going to happen, probably more than once, and you're gonna have to wait for it.

The car belongs to a family on holiday. The father, Hoaggie (Erik Thomson), is a white man of Dutch descent who has worked as a teacher and a professor for a long time. His wife Jill (Miriama McDowell) appears to be Indigenous, and their tousle-haired teenaged sons, Maika and Jordan (Billy and Frankie Partene), are handsome, talkative, and obviously very close to each other and their mother (though one has unarticulated issues with his dad). The family's two tormentors, who emerge from the brush as the family is relaxing after a picnic, demographically echo the family: there's a charismatic, chattering white sadist named Mandrake (Daniel Gillies), after the magician; and a stone-cold-silent Indigenous man known as Tubs (Mathias Luafutu).

I mention the culture-clash aspect of the casting not because the film does a lot with it, but because it fails to really delve into it. This is the biggest missed opportunity of the movie, which has style to burn but (alas) questionable control over the larger meaning of what it shows us. It's hard to tell if this is a case of simple neglect and obliviousness or if the filmmakers were afraid to go there because they didn't want to overcomplicate the dynamic of tormentor/tormented (or if they cast the movie diversely because that's what filmmakers are expected to do now, without pausing to think through the implications of that casting). The bad guys have an agenda and come ready to spring a few narrative twists with ripped-from-the-headlines resonance. But their motivation is ultimately pretty straightforward. It's probably best to leave it to the viewer to figure out exactly what I mean by that, as this is a rare film where merely to discuss it is to give away its reason for being.

Regardless: the film settles into a sort of "Desperate Hours" or "Funny Games" or "Cape Fear" or "Key Largo" mode, with a self-absorbed, cruel man verbally and physically tormenting hostages with assistance from one or more hench-persons who keep their own counsel and harbor their own secrets. The opening act of the film is so devastatingly cruel that I don't know if the movie could've recovered from it even if it had taken a more nuanced and sensitive approach to the dynamics of the kidnappers and their hostages. The movie just dies and never entirely returns to artistic life except as a grindingly cruel abstraction, with Mandrake's discount Max Cady serving up sardonic one-liners and musings (when he talks to other characters, he often seems to be saying what he'd say to himself if nobody else were around) and occasionally commanding or participating in a savage act.

The filmmaking and acting talent on display is undeniable. You should expect to see the names of editor Annie Collins and cinematographer Matt Henley on big-budget action and horror films, and Gillies playing verbose, vicious bad guy roles if he wants to go that route. Nevertheless, even accounting for each viewer's mileage varying, "Coming Home in the Dark" settles into the memory as a mesmerizing missed opportunity at worst, a promise of future classics at best. It's a razor-edged calling card. 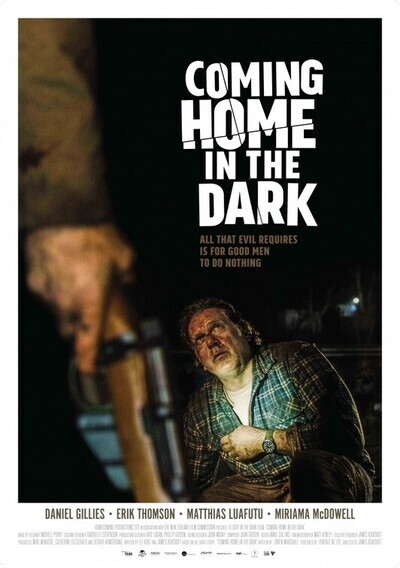