"Coming Home" (not to be mistaken in any way for the 1978 Jane Fonda-Jon Voight Vietnam-era drama of the same name) marks the eighth collaboration between acclaimed director Zhang Yimou and the celebrated actress Gong Li. It is a partnership that has run the cinematic gamut from groundbreaking melodramas like "Ju Dou" and "Raise the Red Lantern" to the lavish spectacle of "Curse of the Golden Flower," and has been compared in many circles to the legendary teaming of Josef von Sternberg and Marlene Dietrich. Because this new film is a smaller and simpler production than many of their previous creations, there is the distinct possibility that it may wind up going down as one of their more minor works. That would be a mistake because what this film may lack in terms of visual flamboyance, it more than makes up for in telling its simple and direct story with a raw, emotional power that doesn't need lavish spectacle in order to get its point across.

The film opens in China in the early '70s, with the country still in the grips of the Cultural Revolutions. Ten years earlier, college professor Lu Yanshi (Chen Daoming) was sent away to a reeducation camp, leaving behind schoolteacher wife Feng Wanyu (Gong) and their young daughter Dandan. Now he has escaped from prison and the authorities suspect that he may try to see them and warn them of the repercussions if they should try to aid him. Feng is torn but the now-teenaged Dandan (Zhang Huiwen) has no particular allegiance to a man she barely remembers, especially after his escape causes her to be overlooked for the position of top dance in her propagandist ballet troupe. Lu does return home and during an attempted escape at a crowded train station, Dandan betrays her father to the authorities, a move that leads to Lu's recapture and Feng suffering a vicious blow to the head while trying to help him.

Three years later, times have changed and the now-exonerated Lu is released from a labor camp. He is met by Dandan, who has given up ballet and now works in a textile factory, and discovers that Feng is suffering from a form of amnesia of an especially cruel nature—she remembers that she has a husband and that he is to return soon but is unable to recognize him when he is standing right in front of her. With the aid of Dandan, who is bearing the crushing guilt of her involvement in the misfortunes of both her parents, Lu goes about trying to figure out some way of jogging Feng's memories enough to get her to finally recognize him, eventually posing as a friendly piano tuner so that he can play a song that he hopes will do the trick and later read her unsent letters. There are some minor breakthroughs—Lu is able to engineer peace between the estranged Feng and Dandan—but not only is he unable to fully get through to her, he becomes privy to secrets that he would no doubt prefer to forget and which Feng can sadly still recall.

Although his earlier films are still as dazzling and powerful as they were when they first came out, it must be said that Zhang Yimou's output over the last decade or so could politely be called uneven—"Curse of the Golden Flower" (2006) was a visually splendid but dramatically inert mess, "A Woman, a Gun and a Noodle Shop" (2009) was a remake of the Coen Brothers classic "Blood Simple" reset in feudal China that was more baffling than anything else and "The Flowers of War" was an attempt at big-scale international filmmaking that was simply embarrassing. With "Coming Home," he has clearly shaken off the malaise of those recent efforts and his work here is some of the best stuff he has done in a long time. The entire opening sequence, culminating in that terrible and tension-filled scene at the train station, is pretty much breathtaking, both in its technical skill and in the way that he has quickly and deftly sketched in the characters and their relationships to each other so that the whole thing is more than just an empty technical exercise. Once the story shifts to Lu's efforts to reconnect with Feng, Zhang shifts into a quieter but no less impressive gear in the way that he tells his potentially soapy story in a direct and unforced manner that earns all of its key dramatic moments without even resorting to sloppy sentiment in order to get a rise out of viewers. (This is all the more ironic when one realizes that the film is based on a novel by Yan Gelling, whose work also inspired "The Flowers of War," a film that could not be more different in terms of its approach and end result.)

Instead of directorial flamboyance, Zhang has chosen instead to concentrate more on the performances of the people playing the three characters who pretty much drive the entire narrative and that gamble has been repaid with a trio of spectacular performances. Gong Li is one of the great actresses of our time, even if her attempts to break through in Hollywood in films like "Miami Vice," "Memoirs of a Geisha" and "Hannibal Rising" did little for her career, and her work here is pretty much spellbinding in the way that she dials down her undeniable beauty and screen charisma to embody Feng and her mental difficulties without overdoing it in the manner of someone angling for an Oscar nomination. As the husband struggling to unlock his wife's past in order for them to have a future together, Chen is equally impressive in a part that is just as tricky as Gong's, if perhaps not as overtly dramatic. The real find, however, is newcomer Zhang Huiwen as Dandan, whose transformation from a petulant and self-serving brat to the chastened adult who is also still suffering as a result of her family's shared past is so striking that one might call her the next Gong Li if it weren't for the fact that we already have a perfectly good one out there.

"Coming Home" may drag a little bit in the middle section and some viewers not fully briefed on the details of the Cultural Revolution may yearn for a little more explanation of its particulars in order to provide some form of context for the story. As problems go, however, these are relatively minor ones and they hardly begin to detract from the film's other achievements. Here is a film that offers viewers the return of a world-class director after years in the artistic wilderness, three of the year's most stirring performances, a story that is powerful without rubbing your nose in it throughout and a finale that will most likely bring a highly earned tear or two to your eyes. What else could you possible want from a movie? 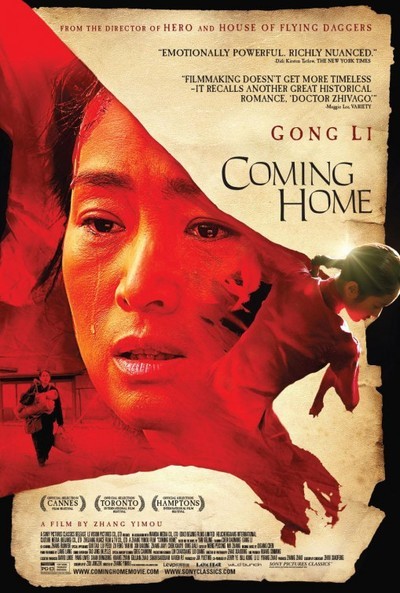