Come As You Are

On paper, it might sound an awful lot like a raunchy, “American Pie”-meets-“Superbad” sex comedy we’ve seen a million times before. But you might be genuinely moved, and even in tears by the end of Richard Wong’s imperfect yet gradually disarming dramedy “Come As You Are,” which follows three men with disabilities as they take a road trip from Colorado to Montreal in order to lose their virginities at a brothel exclusively serving a special-needs clientele. Inspired by true events and written by Erik Linthorst, this delightful, improved remake of the 2011 Belgian movie “Hasta La Vista” engages with the unmet sexual needs of the disabled community with honesty, carefully avoiding a lens of pity and able-bodied guilt. Instead, "Come As You Are" tells its story through empathy, compassion and what feels like winsome insider-y humor.

While empowering and liberating on the whole (and never just shallowly inspiring as films about disabled persons often can be), “Come As You Are” comes with one major caveat: all three actors here are able-bodied in real life. In that, the film feels like a missed opportunity of inclusion at times, when other independent fare like “Give Me Liberty” has recently made strides on the on-screen representation of actors with disabilities. Still, there is a lot to hold in high regard within the intersectional viewpoint and racial dynamics of Wong’s movie, that aims to see the powerful sexuality of those the indifferent world around us insists upon desexualizing. It’s a notion superbly articulated in “Crip Camp,” the upcoming, Sundance-hailing documentary from filmmakers James Lebrecht and Nicole Newnham about the empowering longevity of a ‘60s summer camp for teens with disabilities. “People don’t see you as a man or a woman; you are seen as an asexual person,” one character reflects. In its own modest way, “Come As You Are” sets out to correct these clueless able-bodied optics.

The first person we get to meet in the aforesaid trio is Scotty (Grant Rosenmeyer, with excellent comic timing), a passionate yet unfulfilled paraplegic-from-birth rapper, living with his overly concerned helicopter mother Liz (a most welcome Janeane Garofalo), who seems to casually disregard (sometimes, to comedic effect, as evidenced in the film’s opening) her son’s evident biological needs. There is also the wheelchair-bound Matt (a dignified Hayden Szeto), an ex-athlete who signs on to the same physical therapy center the often-disgruntled Scotty frequents. The duo quickly embraces a childishly competitive attitude against each other, especially after the good-looking Matt gets paired with the center’s beautiful therapist the bad-tempered Scotty has a longstanding crush on.

But all the passive-aggressiveness between the two becomes ancient history when Matt—whose mystery condition gets explained in small, heartbreaking drips later on—breaks up with his conflicted girlfriend and gets fed up with his overbearing parents Maryanne and Roger (Jennifer Jelsema and C.S. Lee). With a little (admittedly, hilarious) help from his cooperative pre-teen sister Jamie (Martha Kuwahara), Matt’s ticket out of his small town proves to be no other than Scotty, who discovers the Montreal-based retreat by chance. Joining the two on their adventure is the thirty-something virgin Mo (Ravi Patel), a blind man employed at the same rehabilitation facility that Matt and Scotty receive care. Doing the honors of cross-country driving is Gabourey Sidibe’s feisty nurse Sam, who brings her much-needed no-nonsense competence to the entire affair, to gradually embark on a romance with the smitten, well-mannered Mo.

For the most part, director Wong and writer Linthorst balance the dramatic cadences of their tricky material well enough. They keep both the comedic bits—which involves reckless driving, bickering, a bar fight as well as an ignorant cop who compares the trio to his relative with down syndrome—and the emotional drama in close check, cleverly avoiding going too far in either direction. Throughout, Wong’s camera stays practical—he keeps things clean, fluid and functional from a visual standpoint, allowing the chemistry of the quartet of committed performers do all the talking. And when the inevitable segment arrives—not the sex, but something heartrending that would be too cruel to spoil—the filmmaker smartly assumes a respectful, matter-of-fact tone instead of spoon-feeding the audience with cheap sentimentality. “Come As You Are” means what it advocates in its title—this endearing little film of acceptance has its heart in the right place. 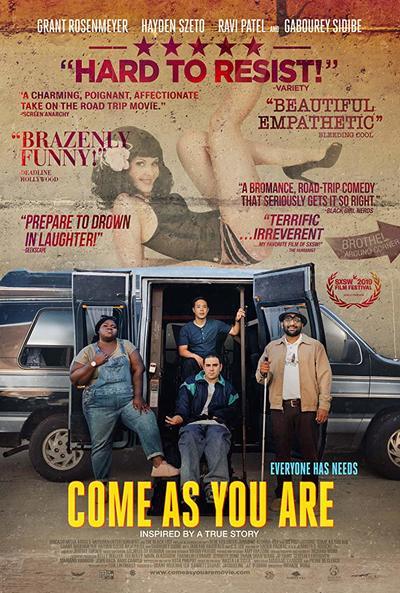