The title "Code Black" refers to a specific medical condition: a patient in cardiopulmonary arrest whose suffering is so great that alleviating it requires a whole team of providers. This documentary by Ryan McGarry, a physician and filmmaker who shot "Code Black" while he was a resident at LA County General, tells us of another definition. It was created to describe the condition of the emergency room's waiting area in terms of color-coding. Code Black means things are as bad as they can get. It means the "system" that is the county hospital is overwhelmed, as a body is overwhelmed during a heart attack, and may in fact be on the edge of death. As this bleak but sadly illuminating movie shows us, the whole U.S. healthcare system is in Code Black. The advent of limited socialized medicine hasn't begun to ease the misery.

The problem, as the movie explains, is twofold. There's funding, and then there's paperwork. Medical care costs too much in this country. It's so expensive that a major injury or the onset of a major illness can bankrupt whole families. There's still tremendous resistance to the idea that society should collectively pitch in for everyone's health care, even though, as one doctor in the film explains, everyone already IS paying for everyone else's health care: when poor or working class people with no decent health insurance go to emergency rooms, the taxpayer ends up footing the bill anyway, so getting on a high-horse about it is silly. The question isn't whether you should have to contribute to a stranger's health care, since you already are contributing in the form of taxes; it's what form that contribution will ultimately take, and how efficiently and sensibly the money will be used.

The paperwork problem is thornier. As "Code Black" points out, emergency medicine as we now know it was created at C-Booth, a ward in LA County General that in flashbacks has a touch of the battlefield tent about it. Because C-Booth was located in a cramped area of an old building, it was spared some of the usual administrative requirements placed on similar facilities in newer hospitals. The doctors and nurses who worked there were sort of grandfathered in, as professionals empowered to concentrate on treating patients and not worrying so much about dotting all the i's and crossing all the t's. When C-Booth moved to a new, state-of-the-art facility in 2008, the waivers disappeared, and now those same healthcare providers talk about spending most of their days filling out paperwork, instead of establishing a rapport with patients and then treating their ailments. Wait times in the waiting rooms began creeping upward. Many patients now wait hours, sometimes whole days, to see a doctor. A few simply give up and go home untreated.

What can be done about all this? I don't think McGarry has any solutions, or pretends to have any. This is to his credit. "Code Black" is more of a description of a set of conditions, or problems—a diagnosis without a prescription. It's heartfelt and messy. It feels like a pretty good segment of "60 Minutes" blown up to feature length. It wants to put a human face on social problems, and sometimes succeeds, but at the cost of getting distracted from the complex arguments it is (often lucidly) making. Perhaps it would have been better as a drier, more analytical piece about systemic ills (a touch of "Frontline"). It's more fair-minded than you might expect, given that it's a film about doctors directed by a doctor. It's aware that something fine was lost when C-Booth relocated and the paperwork monster swallowed everyone up. But it's also aware that there are a lot of players involved in health care treatment—patients, doctors, nurses, administrative staff, hospitals, hospital networks, health care insurance companies, the government—and that they all demand accountability, as well they should. No one enjoys paperwork. There must be a better way. What is it?

There are personal portraits in "Code Black" as well—sketches of doctors, some young and comparatively new, others seasoned—but they're the weakest part of the movie. They feel more like advertisements for the goodheartedness and fundamental idealism of doctors than actual portraiture, and taken together, they have a whiff of "good guys versus an anonymous and coldblooded system" feeling, which one hopes was not the intention. (Recurring scenes of the doctors sitting around a big, well-lit table and shooting the breeze are especially regrettable; they feel like outtakes from an unscripted TV series intended as a timeslot companion to a scripted one.) The movie is at its best when it's immersing you in a series of conundrums and letting you feel what it's like to live with them, and wrestle with them. All of these people are doing the best they can, but the system is broken. 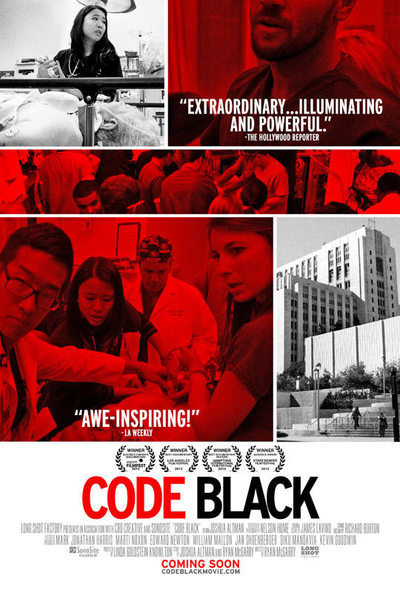