At the end of "Cocoon," some senior citizens were lifted into the sky by a beam of light from a hovering spacecraft and taken to live on a planet where nobody ever got tired, and nobody ever grew old. Now they are back on Earth. Why did they return from their other-worldly paradise? It is too easy to give the cynical answer - because they were needed for the sequel - but I am afraid the movie comes up with no better justification.

The central weakness of "Cocoon: the Return" is that the film lacks any compelling reason to exist. Yes, it is a heartwarming film.

Yes, the performances are wonderful, and, yes, it’s great to see these characters back again. But that’s about it. For someone who has seen "Cocoon," the sequel gives you the opportunity to see everybody saying goodbye for the second time.

The locale, once again, is a retirement community in Florida.

Steve Guttenberg, as the skipper who fell in love with an alien being (Tahnee Welch) in the previous movie, is still chugging around on his glass-bottom boat, casting winsome glances at the sky.

In the bedroom of one of the local Little Leaguers, a strange event takes place. The kid tries to turn off his TV set, but the screen remains bright - and then suddenly he sees his grandfather (Wilford Brimley), one of the old-timers who disappeared into space. Coming back for a visit, Gramps says.

If you want to get technical about it, there is a motive for the spacecraft’s return: The "cocoons" that were deposited on the bottom of the bay have been discovered by oceanographers, and are being disturbed. While an alien team sets about recovering one of their kidnapped fellows, we see a series of reunions with the human travelers and those they left behind.

In the process, all of the same problems, questions and dilemmas that concerned the characters in the first movie are taken out and dusted off again. For example, which is better: to live forever on another world, or get sick and die on this one, but at least get to see your grandson playing baseball? To see the familiar sunsets over the tacky but comfortable retirement villages of the Florida coast, or live forever in a silver city beneath three alien moons? In a way, both "Cocoon" pictures consider the same dilemma that the angels struggled with in Wim Wenders’ "Wings of Desire": Is it better to live forever as a spirit who can feel nothing, or for a finite time as a creature who can breathe and hurt and die? My answer would be: Take me to the silver city and I’ll think it over for a few thousand years. Dying now would be a permanent solution to a temporary problem. But the folks in "Cocoon: the Return" don’t all see it that way, and each couple makes up its own mind.

Don Ameche wants to get back on the spaceship, for example, because to his wonderment he and his middle-aged wife (Gwen Verdon) are expecting a baby, and he wants to live long enough to see the child grow up. Jessica Tandy, on the other hand, would rather stay here on Earth and take a job as a teacher in a day-care center - "the first job anybody has ever offered me." While these decisions are being arrived at, the movie provides a series of love affairs, misunderstandings, philosophical conversations and tragedies small and large. There also is a subplot involving the kidnapped alien, who has fun at first with his captors, but was "awakened" too soon and begins to pine away and die.

Also, of course, there is another opportunity for Guttenberg and Welch to share the strange experience of "merging," which not only passes for sex on the other planet, but replaces it - with no complaints, by all accounts.

The last half of the movie feels kind of strange. It’s all so elegiac, so filled with farewells and bittersweet moments of philosophy. The movie lacks the creative energy of the first one, in which the discovery of the alien "cocoons" created genuine tension, and there was such joy in the scenes where the old men (Brimley, Ameche and Hume Cronyn) were suddenly made young again.

This time, once again, we are invited to share the victory of the elderly cast over the effects of aging, and probably the best thing in the movie is the vitality of the actors. But at the end of the film, as those who wish are carried up once more into the sky, we on Earth are left with the question: Was this trip necessary? 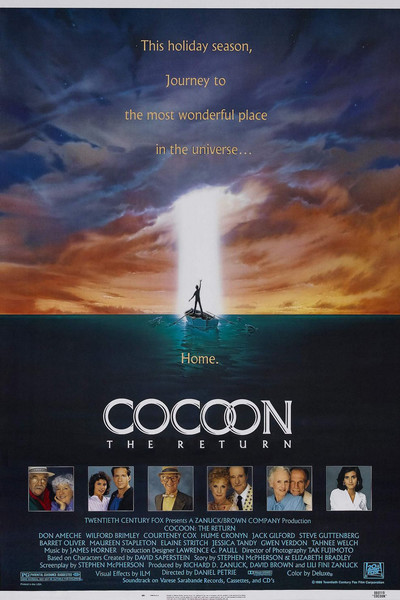