Do you hate it when a review more or less regurgitates the pitch that probably got the project green-lighted in the first place?

I apologize, but there it is. The unsettling thing is that I wrote the above while sitting in the theater waiting for the movie to start. I based it solely on having seen the poster in the lobby. The surprise isn't that the equation turned out to be roughly correct, but that writer-director Stephen Chow doesn't aim to prove or disprove it. He sets out to embrace and transcend it.

A poor boy named Dicky (Xu Jiao) lives with his father, Ti (Chow, actor-director of "Kung Fu Hustle" and "Shaolin Soccer"), in an urban ruin. Dad works construction jobs and shops at hazmat dump sites to keep Dicky enrolled in a fancy private school, where he has a reputation for being unhygienic, although he's really just a little muddy and smudgy. His mean beanpole of a teacher Mr. Cao (Shing-Cheung Lee, a bespectacled Chinese Stephen Merchant) is so germ-o-phobic that he thinks Dicky is a pathogenic vector. A beautiful teacher, Miss Yuen (Kitty Zhang Yuqi), is sweetly sympathetic to Dicky's tattered and, let's face it, lovably grubby condition.

It helps that Dicky is the most adorable creature in the universe. He is so cute and expressive that he's more like a puppy than a boy. He even has fuzzy ears, which are illuminated like downy halos whenever he's seen in closeup and he's lit from behind. This is an appealing trait, but Dicky -- while flawed and tantrum-prone -- also possesses a goofy, innocent charm that triggers adults' adoption instincts. (I was even more delighted to discover, after seeing the movie, that the child who plays him is not a boy at all but a precociously talented 9-year-old girl.)

The second-most adorable creature in the universe is the title character, who originally appears as a plastic glow-in-the-dark ball in a piece of fish netting. It's like one of those glass floats they use for decor in seafood restaurants, but it's squishy and it glows. Dicky's dad finds it in a pile of trash among the abandoned computer monitors, TVs, refrigerators and illegally parked UFOs.

At first it's nothing but a ball with a knob/plunger on the top. Or maybe that's the bottom. Or the side. After a while, it is transformed into a kind of throbbing, light-emitting oversized molar, and then it turns into a furry-faced, chartreuse-bodied pet toy (part Pekingese, part Persian, part alien) with a waggy Po-tail sticking out of its head. Dicky, who has envied another boy's CJ1 robo-dog, is stricken with hubris and christens his thingy a CJ7 -- six generations of technological advancement over his classmate's.

CJ7 is everything a kid could want: It's a ball, it's a dog, it's a cat, it's a friend, it's a toy and it's from outer space. In other words, a Furby from another planet, combined with Wilson from "Cast Away." But Dicky is disappointed when he discovers its low-tech features. It poops, for one thing.

"CJ7" offers a mixed assortment of "messages" for children. On one hand, it seeks to show that poverty is nothing to be ashamed of and that integrity and forgiveness are more worthwhile values than competition or class status. (The greedy villain is a kid Dicky's age who proclaims his entrepreneurial lust for global domination to the entire schoolroom.)

Chow's movie does not seem to be a cynical marketing tool. However, the moment retail and fast-food outlets start pushing their own CJ7 toys made of potentially toxic materials, all its moral lessons will be rendered moot, and the movie will seem as crass and venal as "Mac and Me." Also, Dicky's dad really shouldn't have pushed his son into a small wooden box and then locked him in there.

But for those who are struggling with the consequences of their seemingly uncontrollable emotions, "CJ7" presents an illustration of why you should never say things you don't mean, even when you lose your temper. This is a fable of forgiveness and regeneration, but it delves into a child's deepest, darkest fears. Fortunately, things turn out OK in the end.

The American release of "CJ7" presents a paradox. This film is aimed at ages between "Teletubbies" and "Dora the Explorer," but unless your kids already speak Cantonese (or read lips in Mandarin, which is what most of the actors spoke during production), they're probably not going to be able to interpret the English subtitles. So the people who would most appreciate "CJ7" probably aren't old enough to see it.

It's rated PG for cartoonish violence, brushes with "Bambi"-esque mortality and the word "b-----t" in the subtitles. The latter shouldn't trouble you if your kids can't read profanity. Maybe the ideal non-Cantonese-speaking audience for "CJ7" would be kids who haven't yet developed language skills at all. It's not nearly as puzzling to follow as "Teletubbies," but probably just as scary in its own way. 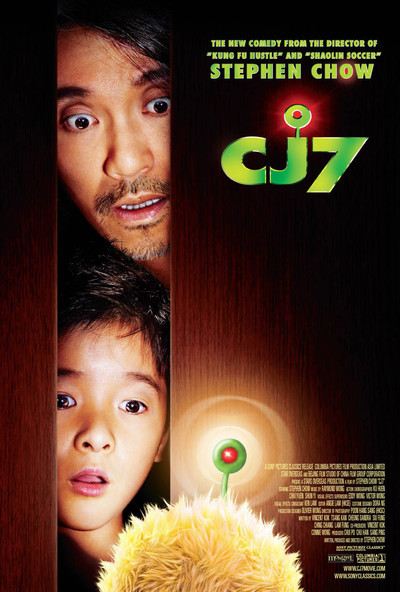