"Civil War (Or,Who Do We Think We Are)" is an account of a country that broke apart and never really got back together. Written and directed by Rachel Boynton ("Our Brand is Crisis"), and shot over a period of years, the film visits northern and southern territories of the United States to tell the tale of the Civil War, the Reconstruction, and their aftermath as they resonate today. It's important here to separate the Civil War from the Reconstruction period. In terms of subject matter, the movie treads familiar ground—the impact of these events on modern life was a constant media topic during the Obama and Trump presidencies. But its thesis that the North won the Civil War and the South won the Reconstruction—via lynching, voter suppression, Jim Crow laws and other forms of disempowerment—will be revelatory to young students, and anyone whose past schooling glossed over or distorted the deeper meaning of those events.

Boynton and her crew spend time in a variety of States that existed during the Civil War, in particular Massachusetts, Pennsylvania, Kentucky, Tennessee and Mississippi, and examine attitudes, practices, and types that you'd expect to see examined in a movie like this. There are Old South-loving Civil War re-enactors and aggrieved descendants of the Confederacy who feel attacked whenever they see statues glorifying the Confederacy being toppled, or hear historians stating that white people as a group still owe sympathy, and perhaps reparations, to the descendants of slaves. There are Black and white Northerners and liberals who seem delighted that sentimentalizing former slaveholders is has finally become not just morally repugnant in the United States, but socially unacceptable as well. The film also takes care to point out that racism wasn't (and isn't) just a southern problem, noting that after the war, white supremacy was the one thing that white Americans in every geographical region could eagerly agree on.

There's also a sub-theme about what, exactly, the Civil War was "really" about. Boynton doesn't spend much energy indulging people who insist that the war was "really" about State's rights. The reputable historian's rejoinder is some variation of The right do do what?, and the filmmaker poses that question or lets others do it for her. It's fascinating to watch counter-examined individuals retreat into bromides about the overreach of the federal government or alternative timelines in which slavery was phased out on a voluntary basis, as if zones of forced servitude were morally no worse than smoking sections in restaurants in the 1990s. One half of a team of men who tend a cemetery for the Confederate dead take the "Good German" point-of-view, stating, "I would have fought for the south. It had nothing to do with political reasons. My home was being invaded." (His use of verb tense is fascinating—it's as if he was there during the war.)

The film musters as much empathy as it can for whites who are still enamored with fantasies of life during the Confederacy, especially as they struggle with the question of whether people who don't own slaves at this moment in time owe anything to the descendants of slaves, or if they continue to benefit economically from slavery. But as the movie goes on, it becomes clear that what's really being talked about is truth, reconciliation, and national deprogramming. Visits with esteemed Civil War historians, as well as academics specializing in abolition, liberation, and Afro-American studies, take on the intimate, mutually validating, warm feeling of group therapy sessions for survivors of abuse: finally there's a space where survivors can talk about what happened to them, without being told that it never happened, didn't happen that way, or wasn't as traumatizing as they feel it was.

There's a bit of fashionable, podcast-style "What is truth, really, and what is a story?" framing, though, and it damages the impact of the movie just a bit. You see Boynton with a boom mic talking to students in a classroom and asking questions off-camera and saying things like "I'm questioning the stories that we tell," and there are moments where you hear the crew talking or see them setting up lighting equipment.

But these touches rarely add anything substantive, and at times they (inadvertently) impede the rhetorical thrust of the project, which says, in essence, that this is not really a "Rashomon"-type situation where you can argue about what happened, why it happened, and what it meant. There is a fundamental objective truth, which is that the nation fought a war over slavery and equality, but for too long certain Americans have been in denial about that, and enshrined their denial in law and culture. Of course this film is about stories and storytelling and who controls a narrative. Repeatedly stating as much in a movie like this one is like taking a Sharpie marker and scrawling the word "eggs" on the side of a carton that was obviously designed to hold eggs and already has the word "eggs" printed on it.

The second half of "Civil War" is stronger than the first because Boynton get out of her own way and lets the subjects and images make her points. A section with a young white high school student who repeats pro-Confederate talking points under the guise of examining the topics "logically" distills a certain type of modern discourse to its slippery essence. The snippets of a 1960 education film telling students that the Union and Confederate soldiers were just nice people fighting for what they believed in; the accumulation of shots of contemporary Southern landscapes with Civil War cannons reverently preserved; the close-ups of Black high school students in classrooms or in the interview seat rolling their eyes at white insistence that the Civil War was about federal overreach: all testify to a national awakening to the reality of forces that have shaped what the nation was, and is.

The concluding five minutes of the film are powerful, and the final shot is a knockout, because by that point Boynton has plugged into a pure filmmaking mode, letting every shot make its own argument. This movie will be of particular interest to students who want a lively, thoughtful presentation of basic historical subjects but aren't going to get it in classrooms where the curriculum is approved by people who are mainly concerned with avoiding discomfort and preserving the status quo. 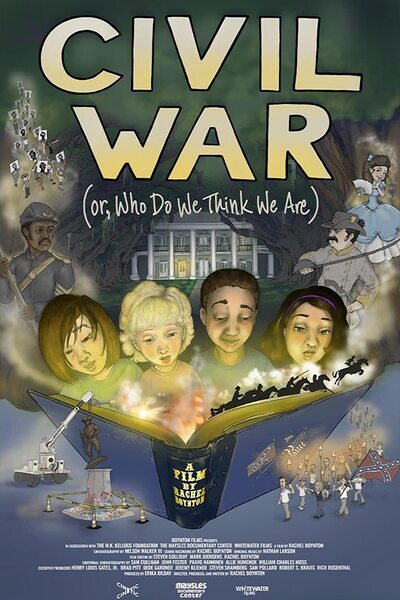