This weekend’s Communist period piece “Child 44” has suffered an incriminating fate that even “Paul Blart: Mall Cop 2” avoided: Russia banned it right before its release, stating that the film reflected upon the nation with evocations of Mordor (the evil land from J.R.R. Tolkien’s “Lord of the Rings”), and in an equally damning move, the film was not screened for critics in many major cities. But unlike some of Hollywood’s stranger tales about film releases, “Child 44” doesn’t need Hobbit-loving Russian government officials to equate it the land of Orcs, or for no one in other countries to know this movie exists, to earn its legacy as a blotch on the resumes of many talented people. “Child 44” is a fiasco by its own free will.

Director Daniel Espinosa’s (“Easy Money,” “Safe House”) bungled epic, based on the novel from Tom Rob Smith, tells of sons and daughters of Mother Russia who are lost within Communism’s inhumanity. They live in a society that claims to be Eden, but a brutal history of orphan-making famine, along with day-to-day dictatorial lunacy, suggests otherwise. Though the quote is never sourced, many of the characters in this world have been programmed to believe in the same motto: “There is no murder in paradise.”

The USSR’s main orphan in “Child 44” is Leo Demidov (Tom Hardy). His parents died in the Holodomor famine in the Ukraine in the 1930s, but he found a new family within Russian military, and was deemed a war hero when seen on newspapers brandishing a Soviet flag after the Reichstag in 1945. A few years later, in Moscow, he makes his living hunting traitors (such as Jason Clarke’s Anatoly) with comrades Vasili (Joel Kinnaman) and Alexei (Fares Fares), while married to a schoolteacher, Noomi Rapace’s Raisa, who could not harbor any less adoration for her husband. “Child 44” spends its time following Leo as he leads the way for a society that creates paranoia, in which, as Anatoly declares, “When you are arrested, you are already guilty.”

The film eventually lumbers to its actual narrative center, when Alexei’s young son is found dead. Because murder does not exist in Russia, the government rules that the boy was hit by a train, but Alexei, his family, and even the coroner know that a fellow Russian is to blame. Though a rational man, Leo stands behind the ruling, fearing to be listed as a traitor by his superior Major Kuzmin (Vincent Cassel) if he challenges the government, and he suggests Alexei do the same.

Such efforts prove pointless when Raisa is revealed to be an informant during interrogations on Anatoly. Because Leo did not turn her in himself, the couple are exiled to the industrial town of Volsk, where another boy is found dead, in a similarly gruesome display. Working under his new superior General Mikhail Nesterov (Gary Oldman), Leo begins to accept that this ain’t no coincidence, and starts a controversial hunt to find the murderer, in order to prove against his government’s delusion about excusing itself from classifications of homicide.

The film is loaded with actors who continue to be reliable. Hardy’s charisma is a steal for any production that can get him, and the added support of Rapace, Oldman, and Kinnaman provides particular dramatic security. The story may feel endless, but they do not forfeit. As the cast collectively saturates fictional beings who deserve to be in a better-realized film, they prove to not be the problem of “Child 44.”

With these performances, it’s those pesky Russian accents that many of its Hollywood actors speak. They aren’t ruinous due to questions of authenticity, but in how some garble their words. Lost key words spoken by characters pile on the avoidable bugaboos. The most nagging one involves Vincent Cassel describing what murder is considered to be in the Soviet Union. It’s such a climactic declaration that the film’s trailer treats it prominently. Even there, as I listen over and over, it makes no sense. The line: “Murder is strictly a …Capillary’s disease? Captaineers disease? Captainese disease? Water on the knee?"

An ancient saying states that a film is written three times - in the screenplay, on set, and in the editing room. The many narrative strands of “Child 44”could have been tangled in any one of these stages, but it feels most of all to be the result of various editing errors, creating a final product that is equally bloated and scatterbrained. Instead of narrowing in on Hardy’s go-getter questioning his blind obedience during this murder investigation, “Child 44”wants an ensemble character scope that it can’t handle. In smaller doses, some scenes are far too choppy, information and cohesion be damned, whether its vicious hand-to-hand scuffles or facile exchanges of dialogue. On the other hand, the film doesn’t hesitate to treat other scenes as opportunities for rants about the terrors of Communism, as with a barbaric, homophobic witch-hunt that garners a five-minute narrative diversion (a scene that suggests provoking some Russian moviegoers, indeed). Or, when famished story-lines need to be kicked back into action, the editing never resists helping characters find each other with impeccable timing, or eventually giving in and just showing us the murderer, because everyone else is too slow.

In the end, the strangest mystery of “Child 44” involves Espinosa: Where did he lose focus? His previous two films, “Easy Money” (which was presented by Martin Scorsese) and “Safe House” affirm that the central narrative of “Child 44” is right in his crosshairs. (I’d more readily trust him with a Jason Bourne movie than I would a sweeping Russian epic, but I digress.) Instead, he’s only able to continue crafting sturdy performances that present a few bursts of curious moral quandaries. The overall tightness that elevated him from “Easy Money”to “Safe House,” however, is lost. While “Child 44” now has some strange release date tales, there are none to be heard yet about any vigorous re-writes, re-shoots, or re-edits that would suggest the film was headed down an alternate narrative course. Well, no such mentions that have been admitted to the public, at least. 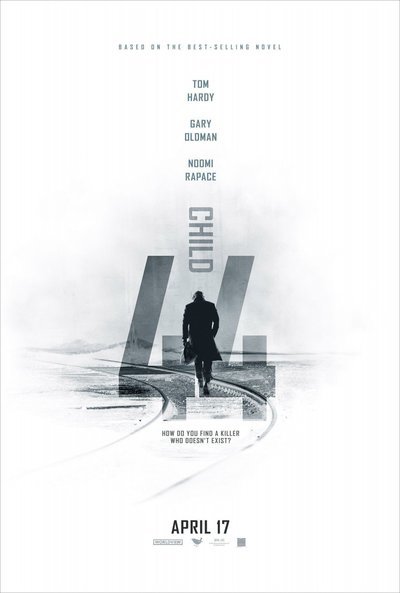 Rated R for violence, some disturbing images, language and a scene of sexuality