“Charlie’s Angels” is the reboot you never knew you needed in your life.

As writer, director, producer and co-star, Elizabeth Banks has achieved a tricky (if somewhat inconsistent) balance between reveling in the playful, escapist fun of the original 1970s TV detective series and asserting a wholly necessary and modern feminist vision. Her movie is brisk and knowingly silly, but it also slows down occasionally to allow her characters to connect and interact as strong, loyal women looking out for each other.

Of course, the clothes are great: racks of shimmery, sequined knockouts and rows of fierce pumps. And it wouldn’t be a “Charlie’s Angels” adventure without a variety of wild costumes for the ladies to don for their undercover assignments as well as an assortment of high-tech gadgets. (The Altoids that aren’t really Altoids are handy.) But Banks—who’s swaddled in a range of luxurious coats and sunglasses herself as the Angels’ subtly wisecracking Bosley—is more interested in what those kinds of outfits symbolize when you’re woman, and how the exterior image can be used as a means of manipulation. As a woman directing a “Charlie’s Angels” movie (following the early 2000s offerings from McG), her gaze reflects her deep appreciation of female power.

This much is clear from the film’s opening sequence in which a platinum-wigged Kristen Stewart (who runs away with this movie—more on that later) seduces a shady businessman over dinner in all the most obviously flirtatious ways. The fact that he has no idea she’s slowly but surely tying him up in literal knots is a testament to her skills but also his idiocy. Men can be malleable, and the women of “Charlie’s Angels” know how to use that to their advantage.

The actual crime solving seems secondary—and truthfully, the doo-dad that drives the narrative in Banks’ script couldn’t be more McGuffin-y. It’s a hand-held device that, in theory, is a revolutionary and Earth-friendly means of generating energy. But in the wrong hands, it could also be used as a weapon. Dun dun dunnnn!

Established Angels Sabina (Stewart as a bad-girl heiress) and former MI6 agent Jane (the commanding and charismatic stunner Ella Balinska) team up with the brilliant, young engineer who devised the technology and blew the whistle on its possible improper use to keep bad guys from stealing it for their own nefarious purposes. Elena (Naomi Scott of the live-action “Aladdin”) is our conduit into this glamorous and dangerous world, but her scientific strengths also provide just the right complement for this team. If the statuesque Jane is the all-business brawn and Sabina is the quick-witted, wild-card decoy, Elena is the exceedingly capable brains of the operation, and it doesn’t take her long to get up to speed.

Sam Claflin plays the smug and insanely wealthy tech bro whose company is releasing the device and Nat Faxon is Elena’s jerk boss who wants to sell it on the black market first. Jonathan Tucker is the wiry and tatted assassin on a mission to stop Elena and her new friends from exposing whatever underhanded plan is in the works (and there’s a red herring in that regard, not that it really matters). And Djimon Hounsou and Noah Centineo get little to do as two of the men who aren’t completely selfish jerks. It’s a solid cast of actors who know better than to take any of this too seriously.

But “Charlie’s Angels” is truly about the women in a way it never has been before, for better and for worse. The girl-power vibe that provides the film’s energy is unmistakable and often exhilarating, but it can also be heavy-handed. We didn’t need an opening montage of girls and women doing awesome things around the globe; it’s clunky and feels out of place. Similarly, while it’s an intriguing and relevant detail that one of Jane’s former informants in Istanbul also runs a women’s clinic, we didn’t need to see the van full of birth control pills and tampons the Angels provide to understand that this is an important service.

These are minor speed bumps along a breezy ride, though. And no matter the setting—from massive action set pieces (which are sometimes choppily edited) to quieter moments of the Angels sitting around chatting—it’s obvious that Stewart is having a blast letting loose in a rare comic role. She’s magnetic in an entirely different way. She’s never had the opportunity to show off her off-kilter timing or her inspired physicality quite like this. Her Sabina is a constant surprise—not just for us, but for the villains around the world who have the misfortune of finding themselves in her sights. 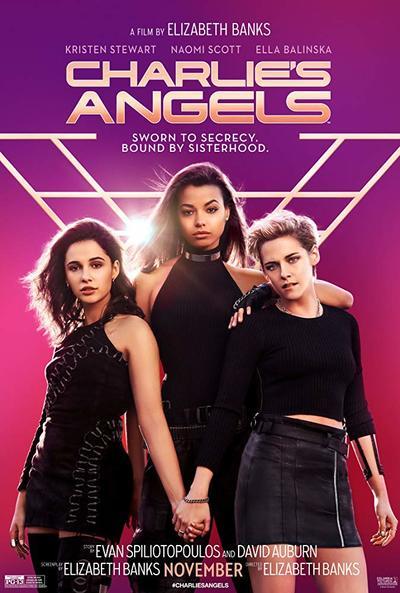 Rated PG-13 for action/violence, language and some suggestive material.