Based on the first in a trilogy of young adult novels by Patrick Ness, "Chaos Walking" is a science fiction western set on a colonized planet where men's thoughts can be heard by others. That's a fertile starting place for a genre film, and the premise is intriguingly visualized by Ness, co-screenwriter Christopher Ford, and director Doug Liman ("The Bourne Identity," "Go"), with characters' thoughts and feelings swirling about their heads in a purple-blue, wreath-like haze that evokes scientists' models of how airborne infections are spread. Every character with this affliction suggests a mood ring when seen from a distance. There are shots of angry mobs where you can see their bad thoughts pulsing. We also hear individual thoughts in snippets of voice-over narration, popping in and out of conversations in the manner of an anxious comic book character's thought balloons ("Keep walking, keep walking," "Don't let them know she's in the barn!"). This is all referred to as "Noise."

We're getting ahead of ourselves—this review hasn't even described what the movie is about yet—but it's easy to do, because "Chaos Walking" is more satisfying to think about than it is to watch. A team-up of two Disney franchise stars, Tom Holland (aka the MCU Spider-Man) and Daisy Ridley (Rey from the "Star Wars" sequels), "Chaos Walking" takes place some time in the future. Earthlings have left their degraded homeworld to seed new systems. Holland's character, Todd Hewitt, is the naive teenage son of a farmer (Demian Bechir) in a small village, Prentisstown, on a backwater planet. The colonists here appear to have been forgotten about.

There are no women in sight. We're told that the indigenous population killed all the women (including Todd's mother) during a war between themselves and the colonizers. The mayor of the village, Mads Mikkelsen's David Prentiss, has built a religion of enforced, ritualized hyper-masculinity, with men affirming that they derive strength from The Noise around their heads, chastising themselves and each other for showing weakness and expressing feelings, and persecuting any man who does on grounds that he's "acting like a woman."

Ridley's character, Viola Eade, falls into this macho cesspool when the spacecraft bearing her toward the planet malfunctions, depositing her in the woods outside of town, the sole survivor of a brutal crash. Of course Todd finds her and develops a crush on her, and it's only a matter of time before he has to protect her against an all-male mob, most of which has never seen a real, live "girl" before. Viola doesn't need protection, really; she's mechanically capable, and can fight. But she does need a guide through the wilderness to take her to find a transmitter left over from a previous mission, which will enable her to call for help.

Pretty soon we're in the territory of a benevolent sci-fi drama like "E.T." or "Starman" revolving around a psychically bonded duo, one of which is more highly evolved than the other. (Of course it's debatable which of these two is better equipped for survival. Todd is a more proficient fighter and killer, but The Noise in his head keeps giving away his position, as well as the thoughts he wants to keep private.) The sci-fi elements coexist with a wilderness survival picture aspect, as well as fragments of an old-fashioned Hollywood Western about the politics of a civilization in a "frontier" built on colonized land. There's a love story, too, sort of—although Todd's basically sexless, pre-adolescent way of relating to women and Ridley's super-capable, big-sisterly vibes (also her energy in the "Star Wars" movies) ensure that any chemistry between them is suppressed or re-directed.

It's frustrating that "Chaos Walking" barely delves into the backstory of the indigenous race of humanoids that were beaten into submission by the humans and that supposedly burdened the surviving humans with audible/visible thoughts, as if cursing them for the sins they committed. (We meet one of the natives in a brief, violent action scene; he (it?) is missing an arm from the elbow down.) But then, there's a lot of detail that gets skimmed over in the urgent push to get Viola and Todd to the transmitter. Liman's deftness at staging large-scale yet intimate action scenes occupies spaces that might've been better served with more world-building and philosophical-theological debate, as well as more insight into the history of this colonized world, which resonates with stories of genocide against indigenous people inside the United States and in countries overseas (Australia and Japan make great  "Westerns," too) and alludes to mythology and scripture (Todd is often pictured eating apples, yet it's the men in the film who have been denied knowledge).

There's also a not-too-subtle commentary on the differences between masculinity and femininity as it's typically constructed by societies. Notice that the men are very easy to read, for better and worse, while the women keep secrets and possess ancient knowledge than can heal the men. Not that we get much more than a few slivers of any of this. The film is less than two hours long, and it tries to cover as much ground as a season of a TV show while pacing itself like a trailer. When it pauses to catch its breath—as in a long scene of one character reading aloud to another—you get a glimpse of the simpler, more focused, more rewarding film that might've been.

To be fair, "Chaos Walking" occupies a tricky marketplace position and appears to have chosen to practice self-censorship in order to exist. It's a $100 million-budgeted sci-fi picture: not small, by any means, but also not big by the standards of Star Wars or Marvel, which routinely drops anywhere from $250 to $400 million on a single feature. Maybe the mandate was to lure new audiences with action and (potential) romance and the (relative) star power of Ridley and Holland, then go deeper into the weeds in future installments. But what ended up onscreen feels not-quite-there a lot of the time, which is not a smart way to try to capture people's imaginations and make them demand sequels. What's the point of playing it safe if it produces the same result as if you'd gone for broke?

This is particularly frustrating given that Ridley and Holland are delivering superb, unaffected performances as characters that we really do care about, in an environment that's been built out just enough to make you fixate on the tantalizing unanswered questions that the film is never going to do more than glance at. The undernourished aspects include the toxic masculinity cult that Prentiss has built up and encouraged. His chief acolyte, played by David Oyelowo, is a firebrand who has internalized everything the high priest taught him, becoming a radical revolutionary who already thinks he'd make a better leader of men. Mikkelsen's approach to his underwritten character is mesmerizing, as is often the case with this performer. Spending most of the film's running time on horseback, wearing a lush, long fur coat and floppy-brimmed hat which channels all the decadent fops that Marlon Brando played after middle age, and delivering his lines in a combination purring Euro-cadence and frontier drawl, he's always perched on the knife's-edge of hamminess. But it's impossible to deny that somehow, mysteriously, like Lebowski's rug, he ties the whole thing together.

Kudos to Liman and his collaborators (including a sound team consisting of more than three dozen people) for showing us something we haven't exactly seen before, outside of a few stray scenes or sequences in telepathic horror or superhero pictures where the main characters have to learn how to selectively screen out the data that their highly advanced senses/brains are vacuuming up. "Chaos Walking" immerses the viewer in a different kind of cinematic headspace, creating a film that gradually teaches the viewer how to watch it. It takes a while to get used to the way these characters interact—particularly the way they shield their thoughts from others by repeating neutral words and phrases like mantras—and how their hidden or revealed thoughts are visualized in the halos around their heads.

But once you're immersed, it's a powerful experience that lingers in the mind long after the film's many disappointments have started to fade. How can a person last even an hour in a world like this one without going mad, or making another person want to kill them? To quote Bob Dylan's "It's Alright, Ma (I'm Only Bleeding)," "...If my thought-dreams could be seen/You'd put my head in a guillotine." 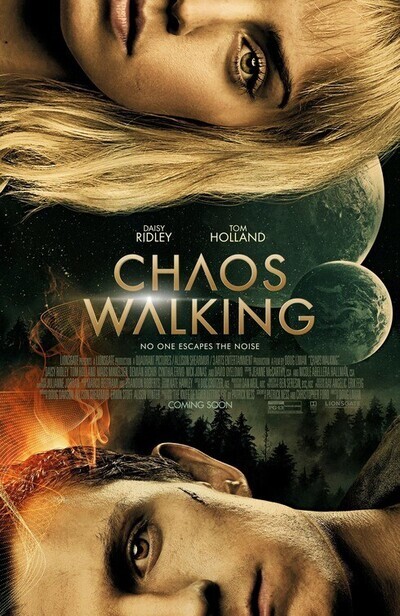 Rated PG-13 for violence and language.